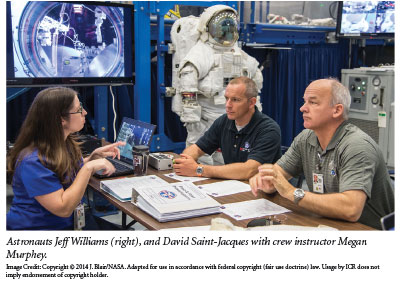 2016 marks the 16th year of continuous human presence at the International Space Station (ISS). NASA astronaut Col. Jeffrey Williams is scheduled to launch on March 18, 2016, from Star City, Kazakhstan, with two Russian cosmonauts on a Soyuz spacecraft for his third long-flight expedition to the ISS.

“People think you launch a rocket and go straight up and kind of hang on in space, but you don’t,” Col. Williams says. “Physics dominates. If we went straight up and stopped, the gravity would just pull us back down to Earth and we would not be able to stay in space. So, most of the rocket ride is parallel to the Earth’s surface. We get out of the earth’s atmosphere, turn a corner relatively soon in the ascent, and go parallel to the earth. We need to get the speed up to 17,500 mph in order to stay in orbit.”

Col. Williams prepared for this mission during the past two and a half years, traveling from Houston to Russia, Germany, and Japan to train. The five weeks immediately prior to the launch have been focused on the Soyuz operation, launching, and rendezvousing with the space station, which, he says, “is critical to the success of the entire time.”

During Col. Williams’ previous missions, he worked with crews to assemble the station. He is looking forward to his stay at the now-complete ISS. On this expedition, his time will be spent maintaining and running the ISS and performing a variety of science research. During his six-month stay on this orbiting laboratory, he and the team will conduct hundreds of experiments related to plants, animals, cells, DNA, physics, and other areas.

He describes what he sees from space as part of God’s design. “The thing that’s most apparent to me when I’m up there is the detail of the design of the part of creation we call Earth. And you see where Earth is in the solar system, you see how vibrant Earth is…the systems that it takes to support life…life activities…changes of seasons. You get a view of the atmosphere and the water cycle that you typically don’t have. We can understand it from the ground, but it brings a new perspective when you see it off the planet.”

Col. Williams’ faith in the Creator of the universe is apparent as he discusses his view above the earth. “Just seeing the design details of the earth…the purpose in those design details…and, oh, by the way, we can only do this because of the order in God’s design. Physics is a demonstration of order, mathematics is a demonstration of order, and the fact that we can launch a rocket at a precise moment, at a predictable moment required, and nine minutes later we’re in orbit going 17,500 miles an hour….[It takes] 90 minutes to go around the earth and then hours later [we] rendezvous with another orbiting spacecraft at 0.1 meters per second—that’s a very vivid demonstration of the order that we can see in God’s design, of His creation, the creation that we’re a part of.”

Col. Williams also says he is eager to share this experience with his grandchildren because they’re now old enough to retain the memories for a lifetime. He understands the importance of teaching upcoming generations the truth about science, the design details of creation, and the wonders of our heavenly Creator.