“Nature is a pretty impressive engineer,” states evolutionist Daniel Lieberman in an issue of Nature magazine. He notes:

The physical world poses many basic challenges, such as gravity, viscosity and pressure gradients, to all living creatures, which in turn have evolved an astonishing array of solutions. Many of these, such as paddles, valves and hydrostats, are so widespread that we rarely notice them. Others perform so well that we marvel at their superiority to human-made devices.1

Creationists maintain it was God who addressed these basic challenges with astonishing solutions—not chance evolutionary processes working for millions of years. Indeed, even if we were to give more time than what the evolutionists would like, we would still never see “nature” producing animals and their multiple systems with such superior function and detail.

The more we learn, the greater our awe in the Master Designer who made it all.

Biomechanics is the field of biology that studies the action of internal and external forces on the living body, especially the skeletal system.2 Also called bioengineering, this fascinating area analyzes biological design and the physical forces associated with humans and animals. If ever there was evidence for creation on a macroscopic scale (Romans 1:20), it would be the vast array of creatures all over the world marvelously designed to move in and fill their environments based on these amazing design features. 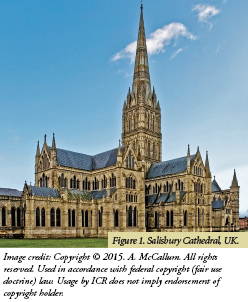 We see that when architects and engineers design buildings or other structures, they either knowingly or unknowingly follow the Creator’s design features found in human anatomy and the animal world. Most of us are aware of the beautiful medieval cathedrals of Europe. Built to the glory of God, they are also a testament to plan, purpose, and detailed design that leaves nothing to chance. The success of such efforts is seen in their victory over gravity through the centuries.

The architectural planning and detail of a typical cathedral are stunning. A majority of large churches and cathedrals in Europe are designed with a wide nave, the central aisle of a basilica church. They also tend to have a lower aisle separated by an arcade (a succession of arches) on either side. The most prominent external feature of the building is the spire, built for vertical emphasis. The tallest spire in England (404 feet) is found on Salisbury Cathedral, mostly built during the years 1220 to 1258 in the Early English Gothic style (Figure 1).

Medieval architects followed design patterns in much the same way as the Divine Architect who exquisitely designed the bones and skeletons of humans and animals. We see that bone construction is designed for the needs of the person or animal in question. Bone is strongest when burdened in compression but weakest in sheer and tension. Any architect would look at the walls and ceiling of, for example, Gloucester Cathedral (circa 1355, Figure 2) in England and think of pneumatic bird bones if they’d had the opportunity to view that internal avian structure. Bird bones are not solid like one would find in dinosaurs such as the 30-plus-ton sauropods. Compressive and tensile stress put on the bird’s skeleton during flight is largely handled by the solid surface of the bone and less in the central portion. Not surprisingly, the interior of the bone is designed with a web of supportive struts (Figure 3) that look much like the Warren truss used in engineering (Figure 4).

The basic structural elements of a Gothic cathedral lie in the interior and exterior piers (the sidewalls seen from the outside) with critical flying buttresses in between (Figure 5). Medieval architects designed flying buttresses to resist bending of the main interior piers due to lateral pressure caused by snow or wind. The buttresses support the structure by carrying lateral thrust from the upper areas of the building all the way to the ground.

We see from a person’s skeletal design that the heads of the two femurs carry the weight of the upper body (Figure 6). During a striding gait, the head and neck of one femur carries all the weight of the upper body. This explains why the elderly who suffer from osteoporosis often break one of their hips—fracturing the neck of the femur—and then fall down, rarely the other way around. The shaft of the femur, which is the longest bone in the body, experiences an asymmetric load that increases the propensity to bend. But there is a long tendon on the lateral side of the thigh called the iliotibial tract, and it is so strong it serves as a site of insertion for the tensor fasciae latae muscle. Such design helps to counteract the bending forces on the femur. The tensile stress (such as that addressed in cathedral construction) that develops on the lateral side of the femur is counteracted.

Loading is a problem also dealt with in the design of both man-made structures and people. God designed people and most animals with bilateral symmetry—an arrangement such that one plane divides the person in two halves that are approximate mirror images. Symmetric loading of supportive columns, such as the human spinal column, results in a centered compressive force whether in an interior pier of a cathedral or an upright human.

Since the weight of the upper body is above the hips, there is a potential of instability in upright posture. God designed features of our skeletal anatomy that contribute to stability. Our spinal column is designed with vertebrae stacked above the hips much like the main mast of a cutter or schooner. The complex system of ropes called rigging that support a ship’s mast and sails are much like the muscles and ligaments specifically aligned to the lower vertebrae and ribs that support the spinal column. One is struck by the similarity of a cutter’s rigging (looking from the stern to the bow) and the ligaments and muscles supporting the vertebrae. In addition, God has designed human pelvic anatomy to have a broad base of support of the upper body by the shortening and flaring of the pelvis. 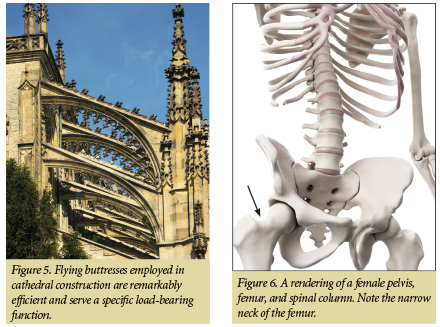 Four-legged animals (tetrapods) must have a specialized spinal column that helps suspend the weight of the body. Again, the field of engineering allows us to appreciate just what is happening as weight is distributed between the front and back legs. A typical suspension bridge is composed of tension members and compression members. Bridge builders design these structures so that the rigid members resist compression and the more flexible members resist tension. Sections or spans of the bridge are designed to rest on piers (supports for the ends of adjacent spans). Combining the piers and spans allows the weight of the bridge to span the distance between the piers. Not surprisingly, the area midway between the two piers (the nodal) is the weight distribution trade-off. A tetrapod vertebral column has approximately the same function. The nodal point depends on the weight distribution of the front and back legs. Neural spines of the vertebrae reverse their orientation at the nodal of the spinal column. The centra and spines of a vertebra are like the compression members, while the muscles and ligaments are like the tension members. The ligaments and muscles of the creature are designed to principally resist tensile forces, while the bones resist compression.

Medieval architects followed design patterns in much the same way as the Divine Architect.

In pliosaurs, the jaw was designed to clamp shut with huge force, and to prevent the prey struggling free. The shape of the pliosaur jaw, with an elevated coronoid eminence near one end has been compared to an asymmetrical swing bridge that is loaded by its own weight when it is open.3

Solutions to mechanical stress in animals are also seen in the design of the arch, a structure that is curved or bowed as seen, for example, in an arched suspension bridge. Arches work in engineering as long as they maintain their shape and don’t flatten out. The weight of the bridge is maintained as long as the arch above it is upheld. Looking at God’s mammals, we see the sternum, ligaments, and abdominal muscles are designed to maintain the arched nature of the vertebral column much like the roadbed between the piers of an arched suspension bridge.

Trunk vertebrae of tetrapods resemble an archer’s bow. Such bow design is also seen in the neck of sauropods, where the brachiosaur’s cervical ribs can be compared to leaf springs.4

No one would suggest such magnificent constructions as schooners, bridges, or cathedrals are the result of random natural processes. How much more so the human body? When viewing and addressing God’s design of people and His animal creatures, the term engineered morphology comes to mind—looking at human and animal anatomy from a biomechanical viewpoint. But there is also ecological morphology, viewing an animal in its natural environment as it purposefully migrates, not randomly mutates. Animals are designed to move in and fill an environment—which is ecology, not evolution. God engineered animals with the innate ability to adapt, which sometimes even leads to speciation. Finally, creation morphology brings together this information for us to observe, measure, and research God’s creatures using the perspectives of function, form, ecology, and design. The more we learn, the greater our awe in the Master Designer who made it all.

* Mr. Sherwin is Research Associate, Senior Lecturer, and Science Writer at the Institute for Creation Research and earned his M. A. in zoology from the University of Northern Colorado.