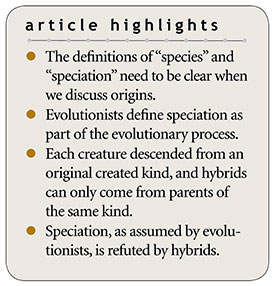 For example, the origin of species is a confusing topic. What exactly is a species? How can we properly analyze and discuss our origins if the words we use mean different things to different people? Consider this approach by Wikipedia, the multi-anonymous online encyclopedia that institutionally assumes evolution is scientific:

A species is often defined as the largest group of organisms in which any two individuals of the appropriate sexes or mating types can produce fertile offspring, typically by sexual reproduction.4

Members of a species breed within the same species. So far so good. But then Wikipedia gives it a Darwinian origin-of-species spin:

The evolutionary process by which biological populations evolve to become distinct or reproductively isolated as species is called speciation....Speciation depends on a measure of reproductive isolation, a reduced gene flow. This occurs most easily in allopatric speciation, where populations are separated geographically and can diverge gradually as mutations accumulate.4

So, the development of distinct, separate species is ground zero for the advancement of evolution. But this evolution-assuming speciation concept of gene pool split-offs due to geographic isolation, etc., has a recurring real-world problem—hybridization. Animals that are supposedly traveling on different branches of the same evolutionary tree shouldn’t be able to breed…but some do. 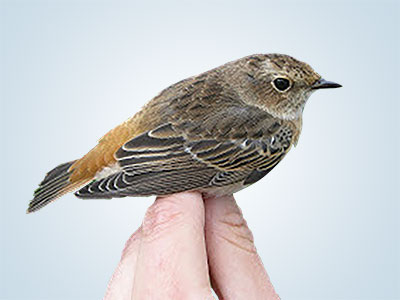 The taxonomic surprise was not due to the birds’ genetics. The surprise was due to the evolution-assuming word “speciation” that ignored a simple fact. Namely, redstarts and whinchats do not represent an “evolutionary process by which biological populations evolve.”4 Instead, they are both descended from avian ancestors that God preserved in the Ark, and those came from a specially created kind that God invented on Day 5 of the creation week.8

God’s truth is better conveyed with clarity; only falsehoods benefit from smoke-and-mirrors deceptions.

God’s truth is better conveyed with clarity; only falsehoods benefit from smoke-and-mirrors deceptions. Yet, sometimes a term’s meaning, either its denotation or its connotation or both, changes so much that different terms need to be used to avoid distractions or other confusions.9