Many creationists believe that the bulk of scientific evidence for a recent creation comes from the fields of geology, physics, and astronomy and that biology and genetics have little to contribute. However, data that confirm a young creation are rapidly emerging from genetic studies performed by both creationist and secular scientists.

One of the most important finds in recent years came from modeling the accumulation of mutations (genetic code errors) in the human genome over time using computer simulations. Researchers found that this buildup of mutations can only reach a certain level before the genome completely deteriorates and humans go extinct. This process of degradation, called genetic entropy, fits perfectly with a recent creation of six to ten thousand years ago.1,2

Two recent research studies performed by secular scientists support genetic entropy. Their data were based on rare single-nucleotide variation observed in the protein-coding regions of the human genome. Over 80% of this variation was associated with genetic entropy exhibited by heritable diseases.3-7 Because protein-coding regions are less tolerant of mutation than other parts of the genome, these regions give more reliable historical genetic information.

When scientists typically evaluate human genetic history, they incorporate hypothetical deep-time scales taken from evolutionary paleontology to calibrate their models of DNA change over time. In other words, they assume millions of years and literally build deep time into their models. In contrast, these new studies use demographic models of human populations over known historical time and geographical space. The resulting data showed a very recent, massive burst of human genetic diversification—mostly associated with genetic entropy. One author stated, “The maximum likelihood time for accelerated growth was 5,115 years ago.”5 This places the beginning of the period of genetic decline close to the Genesis Flood, when the earth began its repopulation through Noah’s family and humans rapidly diversified (Figure 1).8

Amazingly, this recent explosion of human genome variation, mostly associated with genetic entropy, also fits the same pattern of human life expectancy rapidly declining after the Flood as recorded in the Bible (Figure 2).2 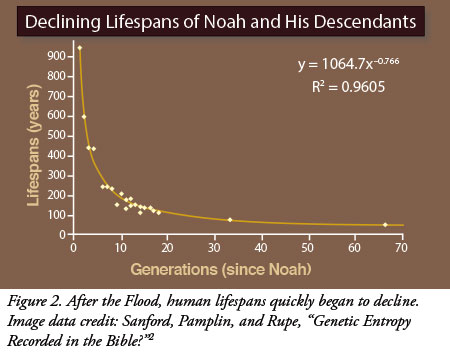 One more key piece of genetic data demonstrating a recent creation comes from ICR scientist Dr. Nathaniel Jeanson, who examined the mutation rates of DNA in the cell’s mitochondria. Mitochondria are small organelles that reside outside the cell’s nucleus. Mitochondria contain their own DNA molecule separate from a creature’s main genome. Mitochondrial DNA is typically inherited from the creature’s mother, and its mutation rates can accurately be measured to produce a molecular-genetic clock. By comparing rates in a few very different animals, Dr. Jeanson demonstrated that a creation of not more than 10,000 years ago is confirmed by these genetic clocks.9,10

The results of these genetic studies fit perfectly with the predictions of a young-earth creation timeframe but make no sense when millions of years are added to the mix—the clocks simply cannot have been ticking that long.

In the case of humans, Adam and Eve were originally created with perfect, error-free genomes—no mutations present. Then sin entered the world, and the whole creation became cursed. The human genome has essentially been on a downhill slide ever since. We are not gradually evolving better genomes. Instead, the recently measured degradation patterns and rates clearly match the biblical model and timeframe.