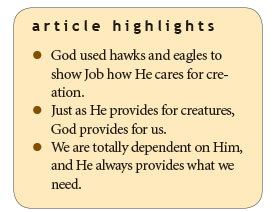 Studying God’s creation bolsters one’s faith in God’s Word, since careful observation of “earthly things” corroborates the information in Scripture—such as how and why God’s creatures behave as they do.1

God taught the patriarch Job a lot about His creation in the “nature sermon” (filled with rhetorical questions) in Job 38–41. God used examples of wildlife to illustrate His wise and caring providence. In particular, He challenged Job to appreciate how and why hawks and eagles fly high in the skies above, looking far and wide for earthbound food.

“Does the hawk fly by your wisdom, and spread its wings toward the south? Does the eagle mount up at your command, and make its nest on high? On the rock it dwells and resides, on the crag of the rock and the stronghold. From there it spies out the prey; its eyes observe from afar. ”(Job 39:26-29)

Some who read Job 39:26 assume hawk migration is the question’s topic.2 But because God compares the hawk’s aerial behavior to eagle flight, the context suggests otherwise. Both raptors require special aerodynamics to lift their heavy bodies into the air. God designed these raptors to utilize weather-powered “elevators” to ascend into air currents.

As well as producing its own lift, a bird can take advantage of rising currents of air to carry it higher. …Rising warm air currents are known as thermals. Many birds, including some larger-bodied migrants such as storks and eagles, follow hill ridges to use rising air currents, or soar up in tight circles in a thermal and then glide off at a height in search of the next one. Such birds will watch other soaring birds, or even glider planes, for indications of where thermals are present.3

Rising hot-air currents routinely blow in from south of Israel, so hawks can “catch a ride” simply by stretching out their wings southward,4 just as sailors harness wind to power boats at sea.5 Gliding and soaring on extended wings reduces air resistance as well as the hawk’s need to burn energy by flapping.6

Likewise, when God commands wind to blow, eagles can “mount up” (literally, “cause to fly”) upon rising thermal air currents—as if they were elevators—and glide almost effortlessly until they spy food far below with their super-powerful distance vision.3,6,7

Eagle flight should also remind us of our need to receptively rely on God’s caring provision for our needs. John Stott notes:

Moreover, the biblical symbol of true freedom is not the flight of the seagull [as taught in the humanistic tale of Jonathan Livingston Seagull] but the flight of the eagle. The false gospel of Jonathan Livingston Seagull is that “we can lift ourselves” out of ignorance, materialism and failure… [but] the true gospel of Jesus Christ is that he is able to lift us. So flight in Scripture is not a symbol of self-effort but of [a complete reliance on God’s] salvation. The picture it presents is not the strenuous flapping of wings, but the spreading of wings to catch the wind, and effortless soaring in the sky.8

From Job, we learn that we totally depend on God, just like hawks and eagles.