The Flood Was Global

There is a great divide between two major systems of belief on the biblical Flood in the days of Noah. There are those who say it is either a purely mythological event or else possibly a local or regional flood. Then there are those who accept the biblical record of the Flood as a literal record of a tremendous cataclysm involving not only a worldwide deluge, but also great tectonic upheavals and volcanic outpourings that completely changed the crust of the earth and its topography in the days of Noah.

Here are a few of the many biblical reasons for believing in the global Flood:

Jesus Christ believed the Old Testament record of the worldwide Flood. Speaking of the antediluvian population, He said: "The flood came, and took them all away" (Matthew 24:39). Evolutionary anthropologists are all convinced that people had spread over the entire earth by the time assigned to Noah in biblical chronology, so an anthropologically universal Flood would clearly have required a geographically worldwide Flood.

The apostle Peter believed in a worldwide hydraulic cataclysm. "Whereby the world [Greek, kosmos] that then was, being overflowed [Greek, katakluzo] with water, perished" (2 Peter 3:6). The world was defined in the previous verse as "the heavens . . . and the earth." Peter also said that "God…spared not the old world, but saved Noah…bringing in the flood [Greek, kataklusmos] upon the world of the ungodly" (2 Peter 2:5).

The Old Testament record of the Flood, which both Christ and Peter accepted as real history, clearly teaches a global Flood. For example, the record emphasizes that "all the high hills, that were under the whole heaven…and the mountains were covered" (Genesis 7:19-20) with the waters of the Flood.

Since "all flesh died that moved upon the earth…all that was in the dry land" (Genesis 7:21-22), Noah and his sons had to build a huge Ark to preserve animal life for the post-diluvian world, an Ark that can easily be shown to have had more than ample capacity to carry at least two of every known species of land animal (marine animals were not involved, of course). Such an Ark was absurdly unnecessary for anything but a global Flood.

God promised that never "shall there any more be a flood to destroy the earth" (Genesis 9:11), and He has kept His word for over 4,000 years, if the Flood indeed was global. Those Christians who say it was a local flood, however, are in effect accusing God of lying, for there are many devastating local floods every year.

Diverse Devonian Plant Assemblage from Early Flood
Scientists recently discovered a diverse assemblage of fossils in South Africa claimed to be some of the earliest land plants.1 Known as seedless vascular plants, the fossils were determined...
BY: TIM CLAREY, PH.D. 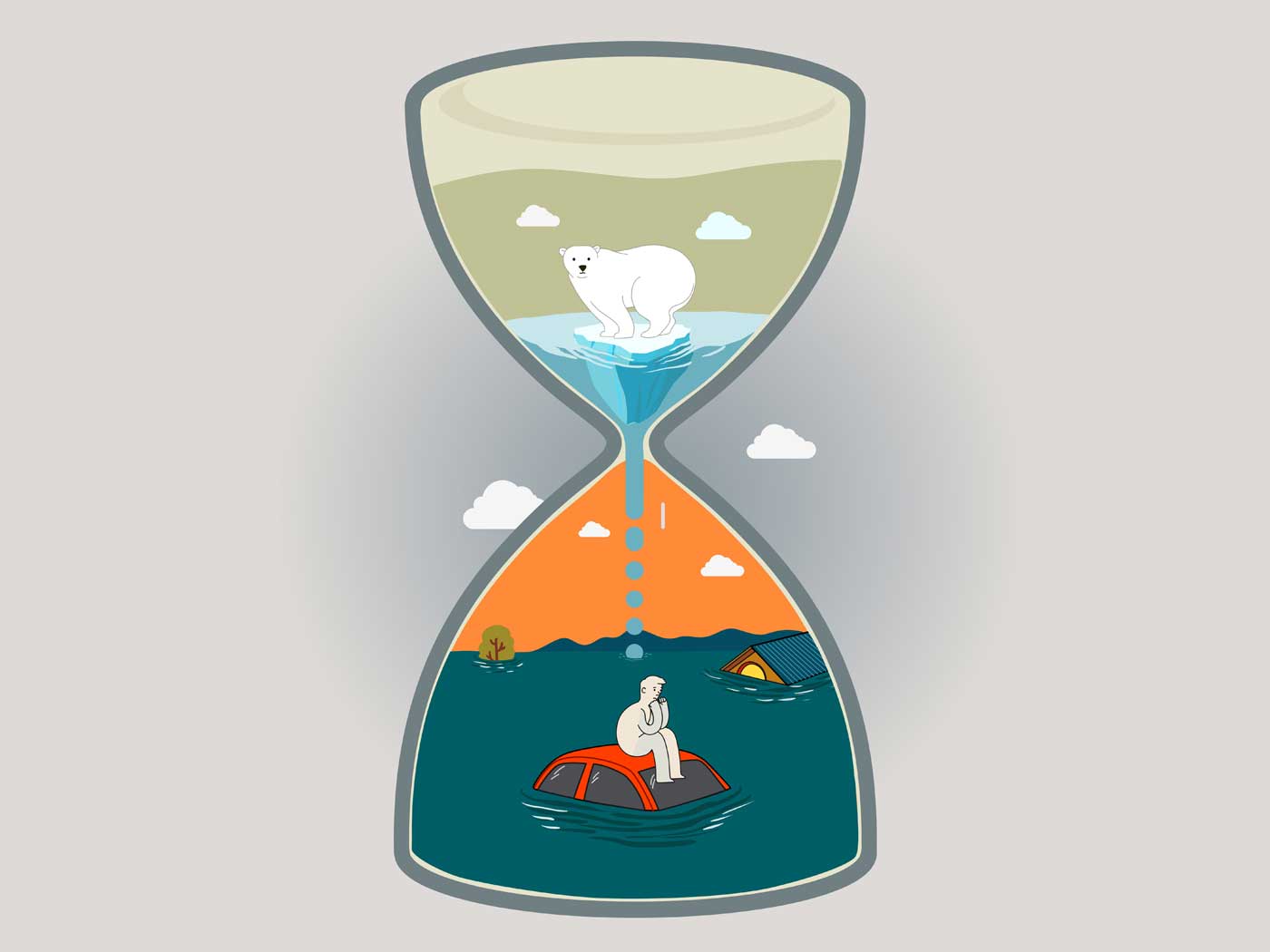 The Pope, the Flood, and Global Warming
In a new book, Pope Francis warns that a “great flood” could result if civilization fails to stop global warming, and he draws an analogy between future sea level rise and Noah’s Flood....
BY: JAKE HEBERT, PH.D.

Cambrian Explosion Alive and Well
A new editorial in GSA Today is claiming that secular scientists should cease using the term “Cambrian Explosion.”1 It’s not for any particularly revealing scientific discovery...
BY: TIM CLAREY, PH.D.

Origin of Tectonic Plates Best Explained by the Flood
A new study published in Nature Communications claims to have figured out how the tectonic plates may have originated.1 It’s been over 50 years since the theory of plate tectonics became...
BY: TIM CLAREY, PH.D.

Sudden Appearance of Flowering Plants Fit Flood Model
A new study published in Nature Ecology & Evolution has claimed that flowering plants, the most common type of plant on Earth, first appeared in small numbers in rocks of the Early Cretaceous. Fossils...
BY: TIM CLAREY, PH.D.

Evolutionists Struggle to Explain Canadian-Australian C.,.
A new species of a split-footed lacewing was recently unearthed in British Columbia, Canada, creating a bit of controversy among secular paleontologists.1 All living relatives of this insect...
BY: TIM CLAREY, PH.D.

Like Father, Like Son, in the Deepest Deep
Two of the remotest places ever visited by humans are the moon and the deepest part of the ocean. Earth’s lowest point is called the “Challenger Deep,” a depression inside the southern...
BY: JAMES J. S. JOHNSON, J.D., TH.D.

Deep Earthquakes Provide Insight into Global Flood
A new analysis of thousands of deep earthquakes has revealed several large structures at the base of the mantle.1 Known as ultra-low velocity zones, these structures may give us better insight...
BY: TIM CLAREY, PH.D.

Yellowstone Super-Eruptions Declining
Recently, renewed activity has had scientists, and the general public alike, alarmed about an impending supervolcano eruption at Yellowstone.1 However, as we predicted, this does not look to...
BY: TIM CLAREY, PH.D.

Possible Parasites Found on Cambrian Brachiopods
Scientists from China, Sweden, and Australia have discovered what they claim is the oldest known parasite, publishing their results in Nature Communications.1 The evidence comes from small tube-shaped...
BY: TIM CLAREY, PH.D.

Dinosaur Washed Out to Sea with Its Last Meal
In 2017, a large dinosaur was discovered washed out to sea,1 similar to the dinosaur bone found 70 miles off Norway’s coast.2 Only this one was partially intact, nearly perfectly...
BY: TIM CLAREY, PH.D.

First Land Bug Buried in the Flood
The Scottish island of Kerrera has produced the earliest known bug in the fossil record, a millipede.1 It was found in Silurian System rocks recently claimed by secular scientists to be 425...
BY: TIM CLAREY, PH.D.

Desperate Dinosaurs Cannibalized During Global Flood
Scientists recently discovered evidence that large theropods were possibly guilty of cannibalism.1 The new study, published in PLOS ONE, examined over 2,300 bones from the Mygatt-Moore Quarry...
BY: TIM CLAREY, PH.D.

‘Grand Canyon’ of Greenland Formed by Genesis Flood
A massive canyon rivalling Grand Canyon has been discovered beneath the ice on Greenland, and uniformitarian scientists are explaining it as a consequence of flooding.1 We couldn’t agree...
BY: TIM CLAREY, PH.D.

Many Martian Volcanoes May Be Mudflows
Tens of thousands of volcano-looking features exist across the northern lowlands and other areas across Mars.1 In the past, these volcanoes were thought to be caused by lava flows from the planet’s...
BY: TIM CLAREY, PH.D.

Cuneiform Reed-Ark Story Doesn't Float
News emerged in 2010 that Irving Finkel, a cuneiform expert at the British Museum, had translated an ancient tablet describing Noah’s Ark as round and built of reeds.1 Now, Finkel is...
BY: BRIAN THOMAS, PH.D.

Did Noah Recognize Different Frog Species?
"What if Noah got it wrong?" is a question recently posed in a ScienceDaily article. "What if he paired a male and a female animal thinking they were the same species, and then discovered...
BY: BRIAN THOMAS, PH.D.

'New' Flood Theory Echoes Creation Research
A UK researcher has proposed that fluctuating sea levels several thousand years ago may have displaced Middle Easterners living on land now beneath the Indian Ocean, their settlements flooded by the rising...
BY: BRIAN THOMAS, PH.D.

A Round Noah's Ark?
Noah’s Flood was a worldwide cataclysm that destroyed all life on earth, except for the representatives of each kind of land and sky-dwelling creature that were saved aboard Noah’s Ark....
BY: BRIAN THOMAS, PH.D.

Who's Building Noah's Ark This Time?
Over the years several individuals and various groups have attempted to reconstruct Noah's Ark, either at full or partial scale. Most efforts were halted in the planning stage or in the fund-raising stage,...
BY: JOHN D. MORRIS, PH.D.

Vulgar Notions of a Universal Flood
Scientists of the early sixteenth century faced a dilemma: how did fossils originate? Tradition had held for centuries that the existence of marine shells on hilltops was due to the Genesis Flood. On the...
BY: WILLIAM A. HOESCH, M.S.

Why Did God Give the Rainbow Sign?
Noah and his family had just come through an unimaginably frightening experience. Perhaps they had never even seen a storm, and certainly no one had ever seen one like this. It would have been indelibly...
BY: JOHN D. MORRIS, PH.D.

The Lasting Noahic Covenant
"And I will establish my covenant with you; neither shall all flesh be cut off any more by the waters of a flood; neither shall there any more be a flood to destroy the earth" (Genesis 9:11)....
BY: HENRY M. MORRIS, PH.D.

Did God Lie to Us?
When I was a child, I sometimes went with my father to one of his speaking engagements. It was always a great father/son time but he was also making sure the truth was transferred to his son. As soon...
BY: JOHN D. MORRIS, PH.D.

How Could Noah Have Built the Ark All by Himself?
". . . the works were finished from the foundation of the world." (Hebrews 4:3) Some have ridiculed the Flood story by insisting that the job of the Ark's construction was impossibly...
BY: JOHN D. MORRIS, PH.D.

Why Christians Should Believe in a Global Flood
The Biblical Flood in the days of Noah has become a great divide between two watersheds of belief. On the one hand there are those who say it is either a purely mythological event or else possibly a...
BY: HENRY M. MORRIS, PH.D.

What Part Does The Flood Of Noah's Day Play In Creation.,.
Many students of the creation movement have noted that the publication of The Genesis Flood by John Whitcomb and Henry Morris (1961), was used by God to catalyze the modern revival of creation thinking....
BY: JOHN D. MORRIS, PH.D.

The Resource for Answering the Critics of Noah's Ark
How many animals did the Ark actually carry, and how did Noah get all those animals on the Ark? How could eight people possibly care for so many thousands of animals, and how could such a small...
BY: JOHN WOODMORAPPE

Does Scripture Require a Global Flood?
Up until fairly modern times, people in western countries have basically believed that the Bible was God's Word, and, by and large, believed what it said. This was certainly true for views of...
BY: JOHN D. MORRIS, PH.D.

Has Noah's Ark Been Discovered?
When God wrote the Biblical record, He chose not to give all the scientific and historical details. The best we can do is to hold tightly to the specifics it does give, and interpret the scientific...
BY: JOHN D. MORRIS, PH.D.
More Original Biochemistry Shows That Fossils Are Recent