One of the biggest hurdles for evolution to overcome is the transition of creatures from living in water to living on land. In the previous article, I showed how all of the alleged aquatic ancestors that were supposedly evolutionary precursors of terrestrial creatures were nothing more than unique types of fish-like creatures that couldn’t have lived on land.1 But the secular story gets even more implausible due not only to a huge absence of transitional fossils during the period of time in which the early land vertebrate evolution supposedly took place, but also to an explosion of complex terrestrial life at the beginning of the Carboniferous (Mississippian system).

During the mid-1900s, Alfred Romer, a Harvard vertebrate paleontologist, candidly noted that about 30 million years of time following the end of the Devonian (Age of Fishes) and extending into the overlying Carboniferous contained no transitional fish-to-tetrapod fossils to help the evolutionary cause.2 This glaring lack of land-evolving tetrapod fossils became widely known among paleontologists as Romer’s Gap.

Jennifer Clack, one of the leading vertebrate paleontologists of the modern era, candidly spoke of this huge evolutionary problem. In a 2009 publication she stated, “The fossil record of post-Devonian tetrapods is notoriously sparse for about 30 million years after the Devonian/Carboniferous (Mississippian system) boundary.” She also said, “The origin of limbed tetrapods did not coincide with the acquisition of full terrestriality, an outcome that probably arose in the Early Carboniferous. This later part of the story is documented by few fossils.”3

According to the evolutionary timeline, Romer’s Gap ran from about 360 to 330 million years ago, corresponding to the first 30 million years of the Carboniferous, known as the early Mississippian or lower Carboniferous. Based on extensive research by ICR geologist Dr. Tim Clarey, these Early Carboniferous sediments likely represent deposits from violent tsunami-like waters as the Flood rose higher and began to inundate the outer edges of land in the latter part of the Kaskaskia Megasequence.4

Not only do these deposits contain both aquatic and land animal fossils, they also include the first deposits of plant material from lowland coastal environments. While the global Flood model expects this rock record scenario, evolutionists see an enigmatic gap yielding a glaring discontinuity between the vast fossil deposits of diverse fishes found at the end of the Devonian and the sudden emergence of fully terrestrial creatures in the Carboniferous.

Has Romer’s Gap Been Shortened?

In recent years, evolutionists have claimed they’ve shortened Romer’s Gap by about 15 million years (Ma) through two different fossil discoveries in Carboniferous sediments. The first animal claimed to have helped close the gap is Crassigyrinus (meaning “thick tadpole”), a distinctly fish-like creature with a streamlined tadpole-shaped body up to six feet in length (Figure 1). Paleontologist Michael Benton described it as “an elongate Moray eel-like animal with a massive head.”5 Its limbs were tiny and totally incapable of allowing it to live on land. In fact, the general consensus among paleontologists is that it was almost completely aquatic.5,6 It had very large jaws with two rows of sharp teeth and could open its mouth as wide as 60°. Its very large eyes may have helped it see in dark murky waters in coastal swamps.

Combined together, its bodily features suggest it was a fast swimmer and ideally suited for catching fish. The main reason evolutionists like to claim Crassigyrinus helps to close Romer’s Gap is that it was discovered in Early Carboniferous strata during a time period in which a transitional form was desperately needed. However, this creature was clearly a full-time aquatic animal and not a transitional form at all.

The other major fossil finding thought to help close the gap is known as Pederpes (Figure 2). This extinct type of land tetrapod supposedly dated to about 348 Ma in the Carboniferous (Lower Mississippian), which would place it close to the middle of Romer’s Gap.7 Pederpes was about three feet long, and the shape of the skull combined with forward-facing feet (rather than outward-facing) indicates it walked on land.

In addition it had a narrow skull, suggesting that it breathed air using a muscular action similar to many living tetrapods instead of pumping air through its lungs using a throat pouch like amphibians do. Thus, it’s believed that Pederpes was not only a fully terrestrial creature, it wasn’t even categorized as an amphibian, which some evolutionists consider to be a potential transitional state. However, even amphibians are a complete enigma to evolutionists since they are extremely diverse and many have very complex life cycles. 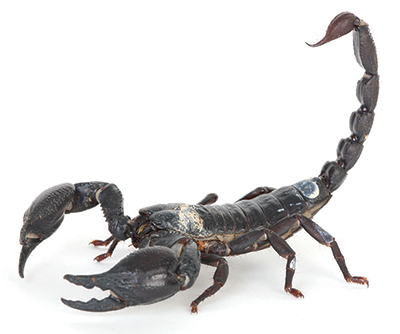 Not only have Pederpes and Crassigyrinus provided little resolution to the problem of Romer’s Gap, the recent excavation of numerous marine and terrestrial fossil creatures in strata at the very beginning of the Carboniferous system known as the Tournaisian Stage has upset all sorts of evolutionary theories from the Devonian extinction to tetrapod evolution in general.8,9 In the global Flood-based model of progressive burial by ecological zonation, the Tournaisian strata perfectly represent the first pulses of the tsunami-like floodwaters as they hit land.

These rock layers exhibit a distinct marine geochemistry and contain the first fossils of coastal land plants, lots of marine fish and fish-like aquatic creatures, and a variety of coastal terrestrial fauna. In fact, fully legged animals like arthropods (e.g., scorpions), amphibians, and even several different types of lizard-like creatures have been documented in these strata. In a paper on the subject, Clack and her coauthors say, “The new taxa and specimens suggest that tetrapod diversification was well established by the Tournaisian….Tetrapods were probably living on vegetated surfaces.”9 As a result of these new fossil data at the base of the Carboniferous, any potential time for an evolutionary transition from water to land has now vaporized.

Not only has the water-to-land evolutionary story taken a huge hit by the lack of transitional fossils and zero time for evolution to occur, even the Devonian extinction theory has become muddled. Clack and her coauthors state, “The early tetrapod fauna is not easily divisible into Devonian and Carboniferous faunas, suggesting that some tetrapods passed through the end Devonian extinction event unaffected.”8 Indeed, fish fossils from Tournaisian sites around the world tend to be very similar in content, containing common and similar species of ray-finned fishes, lobe-finned fishes, acanthodians, sharks, and holocephalans.10 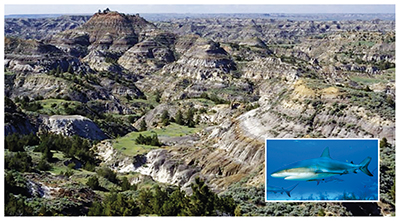 While evolutionary theory struggles to explain why some fish would have survived the Devonian extinction while others (e.g., armored fish like the placoderms) did not, the Flood model fits the data well. The global Flood itself would have killed significant numbers of all types of fish and largely buried them based on ecological zonation.

Furthermore, many of the unique pre-Flood marine ecological environments would have been destroyed, thus eliminating certain classes of fish that simply couldn’t adjust to the less hospitable marine environments of the post-Flood world. The reason there is a mixing of marine animals with coastal creatures is because the sediment-laden floodwaters violently pushed up onto land, carrying marine fauna and mixing and depositing it with terrestrial fauna as represented by the top of the Kaskaskia Megasequence. This continual mixing of marine fossils with land creatures continued as the floodwaters progressed even farther to finally cover every landmass and terrestrial ecosystem. For example, in the Hell Creek Formation in Montana sharks are buried with dinosaurs in the highest level of the Flood (Cretaceous) marine sediments.11,12

From an evolutionary standpoint, Romer’s Gap still holds true in regard to a lack of transitional forms between fish and legged land tetrapods. However, there is no true distinct gap in the fossil record and no period of time for water-to-land tetrapod evolution to even take place. The initial layers of sediments in the rock record after the Devonian (Age of Fishes) in the Lower Carboniferous are chock-full of land-based animals and plants.

While none of these data either support or make sense in light of evolution, the global Flood-based model of progressive burial by ecological zonation over the year-long period described in Genesis fits the fossil and rock record closely.