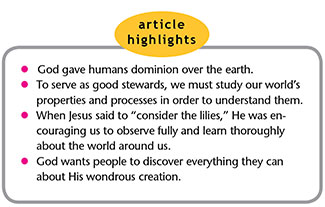 At the end of His creation work, God gave humans a directive that’s sometimes referred to as the dominion mandate: “Be fruitful and multiply; fill the earth and subdue it; have dominion over the fish of the sea, over the birds of the air, and over every living thing that moves on the earth” (Genesis 1:28).

It’s noteworthy that this was God’s first commandment to the man and woman He’d just made. They were to exercise dominion over the newly created Earth in a responsible stewardship. This would necessarily involve scientific study. If they were to subdue the earth as good stewards, they must first understand its properties and processes.

But as the Bible tells us, the creation soon became cursed because of Adam and Eve’s sin. The resulting wicked earthly population, after about 1,700 years of mayhem, was destroyed by God in a global flood. Only Noah and his family were saved, along with representative land animal pairs. After the Flood, God reaffirmed the dominion mandate to Noah, with modifications to accommodate the curse that had entered the world since the first time He issued it (Genesis 9:1-10). As history continued, God gave more detailed moral and civil mandates that were made necessary because of the presence of sin.

While these truths are rooted in the Old Testament Scriptures and have been elaborated on by creationists elsewhere,1 the Lord Jesus Christ also made reference to the need for us to undertake a detailed study of His creation. In Luke 12:27-28 and Matthew 6:28-30, He used the example of lilies to illustrate the providential care of God for His children and how we should trust in Him for our needs.

Although this is the central truth of these statements, a closer look at the Greek text gives us unique insight into our dominion mandate role as creation scientists. In Luke 12:27, Jesus said to “consider the lilies, how they grow.” While there are a variety of Greek words that could have been used to describe beholding something, this particular verb form is much more intensive. It literally means to “observe fully,” an active process of analyzing and discovery. Interestingly, in Matthew 6:28, the Lord Jesus made the analogy again, saying, “Consider the lilies of the field.” In this passage, a different Greek word is used with the meaning “to learn thoroughly.”

We essentially have two accounts of this teaching recorded with two different forms of Greek verbs emphasizing the idea of intensively studying and considering the handiwork of the Creator. Because both verb forms are in the second person plural, they are directed to all of us—and particularly to those who acknowledge the wisdom of their Creator, the Lord Jesus Christ.

Unfortunately, most systems and vocations in our present world, including the sciences, deny the Creator and His moral guidance. Most research is done for self-serving and man-centered reasons. It’s important to understand that God’s dominion mandate, given both before and after the fall, has never been rescinded and was authenticated and reaffirmed in the teachings of the Lord Jesus.

Thus, Bible-based scientific research is a worthy pursuit for engaging the dominion mandate. It enables us to be better stewards, deepens our knowledge of the world around us, and provides new opportunities to praise God for His “fearfully and wonderfully made” creation (Psalm 139:14).