ACTS & FACTS     BACK TO GENESIS     GEOLOGICAL EVIDENCE INDICATES RAPID FORMATION     MUCH EVIDENCE EXISTS FOR A WORLDWIDE FLOOD     THE FLOOD WAS GLOBAL
The Hualapai and the Flood
BY WILLIAM A. HOESCH, M.S. *  |
TUESDAY, JANUARY 01, 2008

It rained for 45 days, and the whole earth was flooded. All the people were destroyed, except for one old man atop Spirit Mountain. Many days passed and a dove brought him instructions from the Creator to drive a ram's horn into the earth. The old man obeyed and the waters were drained. He sent the dove forth, and when it returned with fresh grass in its beak, he rejoiced for the land had become dry.

When the old man died, the Creator made "a younger brother and an older brother." In obedience to a dream, the two scraped, cleaned, and laid out canes. Before the next dawn the canes turned into a great population, and older-brother's rule over them was good. When he died, younger-brother commanded Cousin Coyote to fetch fire for the funeral pyre from faraway Fire-starter. But Coyote was disobedient and looked back, only to see that the fire had started without him. Dashing back to the pyre, he reached into the blaze, snatched older-brother's heart, and fled with it in his clenched teeth. (To this day, coyotes bear the mark of rebellion in their upturned, disfigured mouths.)

This is the Flood story of the Hualapai Indians of northwestern Arizona.1 Like hundreds of Flood traditions, it was apparently handed down orally over the centuries. The Hualapai account corresponds to petroglyphs--one depicting a vessel carrying eight people (including younger-brother chief) across the floodwaters--inscribed on the flanks of Spirit Mountain in the area of Davis Dam, California, near the Colorado River. Some of the finest rock strata evidence we have for a global Flood is found on Hualapai lands in the westernmost Grand Canyon. Research by ICR geologists has been carried out there for the past ten years with the kind cooperation of the Hualapai. On these lands, song, rock, and petroglyphs agree--on a global flood. 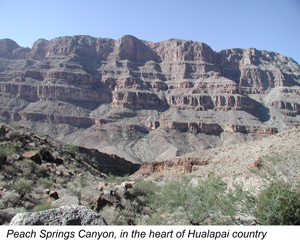 Obviously the dove, the 45 days, the eight people aboard a vessel of deliverance, and a fall that marred even the animal kingdom, bear a remarkable resemblance to the biblical account. One might suspect it was a corruption of the Bible story, but this is unlikely for three reasons: 1) it is at least 150 years old, pre-dating all but the earliest Christian influences; 2) the Hualapai are fiercely proud and, for the most part, eschew "white man's" ways, including his religion; and 3) it matches with petroglyphs known to be ancient (though they cannot be absolutely dated). The account appears authentic.

The God who made the world and all things in it....He made from one |blood| every nation of mankind to live on all the face of the earth, having determined their appointed times and the boundaries of their habitation, that they would seek God, if perhaps they might grope for Him and find Him, though He is not far from each one of us. (Acts 17:24-27, NASB)

Jesus was not white, nor did He found a "white man's religion." God loves the Hualapai and sent His Son to earth to prove it. This is a love story begun in the book of Genesis, and the modern Hualapai retain a memory of the events recorded there.

What Other Doctrines Do You Ignore?
Recently I was talking with an evangelical pastor about his view on creation. Please understand. Creation is not the only Biblical teaching I care about....
BY: JOHN D. MORRIS, PH.D.
The Deity of the Risen Christ
We often hear this criticism from evangelicals: "You creationists are causing controversy and division among Christians; you should just be preaching...
BY: HENRY M. MORRIS, PH.D.
God's Library
I have always loved books and libraries. As a child, I spent much time in the Houston Public Library and read many books. As an engineering student (later...
BY: HENRY M. MORRIS, PH.D.
More Creation Science Update

Do Bird Embryos Show Evidence of Evolving from Dinosaurs?
The majority of zoologists and vertebrate paleontologists believe that birds are actually flying dinosaurs. This even includes the world’s smallest...
BY: FRANK SHERWIN, D.SC. (HON.)
The Latest
NEWS   ACTS & FACTS   PODCASTS