Evolutionists insist that dinosaurs evolved into birds, despite the strong evidence against it.1 One of the portrayed misconceptions concerns the brains of large predatory dinosaurs like Tyrannosaurus rex that have been depicted as similar to the brains of their bird “descendants.” However, CT scans of T. rex skulls give scientists additional details of its brain cavity, demonstrating its large olfactory lobe (for smell) and an overall shape that is much more similar to modern alligators than birds.

Bird brains have a completely different shape from those of dinosaurs and reptiles, with a larger section for processing data. Birds have to do more than sense a food source; they have to be able to discern one food source from another. Alligators merely smell something and snap at it without thinking. Not only is a bird’s brain shaped differently, but pound for pound relative to body weight, the typical bird brain is much larger than a typical reptile brain by nearly an order of magnitude (or ten times). 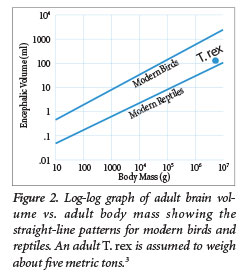 To examine this issue more closely, I obtained a full-scale model of a T. rex brain cast, called an endocast (Figure 1). The brain cast was eight inches in length. The encephalic volume (brain size) of the adult T. rex was estimated by submerging the cast in water. I determined the volume of water displaced, and therefore the brain volume, to be 158 cc. By comparing this to the expected value for a typical reptile scaled up to the size of a T. rex, I found this volume fell very close to the expected value for a typical reptile, showing again that the T. rex was not bird-like in brain size (Figure 2). For comparison, the average human adult male brain has a volume of around 1,273 cc, giving T. rex a brain nearly an order of magnitude smaller than the human brain, even with its immense difference in body size. 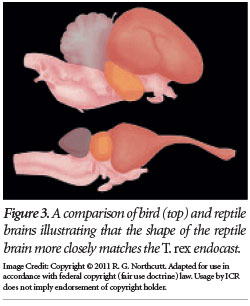 Unfortunately, movies often depict dinosaurs inaccurately. They were not birds or even bird-like. Their brains were shaped and sized more like today’s reptiles (Figure 3). All data on brain size and shape indicate their intelligence, thought processing, and senses were probably very similar to alligators. Some dinosaurs may have been able to smell really well, but they could not perform a complex task like opening doors.

Brain endocasts may not be able to give us a true measure of intelligence, but we do see that many dinosaurs had different brain sizes relative to body size. Stegosaurs and sauropods had the smallest brain-to-body ratios, whereas theropods like T. rex had much larger brain-to-body ratios. Apparently, the stegosaurs and sauropods were designed with smaller brains because that is all they needed to locate their food, function, and reproduce. Theropods had to see, smell, and hunt their food sources, so they were designed with more extensive sensory powers that required a larger brain.

God created dinosaurs on Day Six of the creation week (Genesis 1:25). God designed dinosaur brains that were perfectly suited for their lifestyles. Their brains were in proportion to their reptilian bodies and only as large as they had to be to function. There is no support for dinosaur-to-bird evolution.