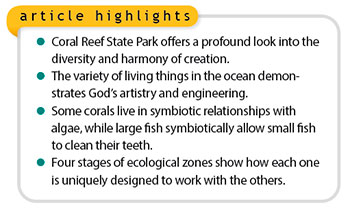 I surely enjoyed leading college student groups on spring break camping trips to John Pennekamp Coral Reef State Park on Key Largo in Florida. Diving excursions to the coral reefs about three miles offshore were my favorite parts, but there were also fascinating boardwalk and canoe trips to the mangrove forests along the shore. Near-shore swimming gives opportunities to meet intriguing sea creatures up close and personal, plus trails wind through exotic forests that grow nowhere else in America. On a late-night walk along a sandy beach, you could stir up flashing points of light by disturbing bioluminescent sea creatures—“fireflies” of the sea. Want to come along?

Tropical reefs like those in the Florida Keys feature corals on shallow sea floors. Each tiny coral animal (polyp) is essentially a tiny stomach with “fingers” (tentacles) for stuffing itself with food. It has no brain, eyes, heart, lungs, or liver and lives in a secreted limestone cup (corallum) cemented to hundreds or thousands of its closest neighbors to form a coral colony. The colony may be shaped like a boulder, brain, antler, fan, or bush that sways in the waves.

Many corals need very little food because their polyps and stony cups house green algal cells that can make their own food by photosynthesis. The algae share their food with the corals, while the coral supplies the algae a safe living space. The relationship between a coral polyp and its algal cells is called symbiosis—specifically mutualistic symbiosis, since both partners benefit. The coral-algae partnership is a relationship “made in heaven” by God’s decree at creation!

God also demonstrates His artistic range by producing a stunning array of colors, forms, and sizes, all expressing distinctive variations on His creative themes. He did the same in creating human beings with the ability to appreciate all that creativity. Colorful, swaying forms of large sea fans, sea plumes, and sea whips are favorites of snorkelers, divers, and visitors aboard glass-bottom boats or in aquariums who find them particularly beautiful.

The Lord of creation engineers astonishing actions as well as beauty. For example, at fish cleaning stations, small fish near distinctive corals are willing to clean the teeth of big fish while they literally wait in line! When its turn comes, the big fish swims up, opens its mouth wide, and lets a cleaner fish swim in and pick bits of debris from its teeth. Then the second miracle occurs. The big fish with clean teeth lets the cleaner fish out—before it goes off to hunt other small fish to eat! What effect do you think Darwin’s “war of nature” would have on cleaning symbiosis? Cleaning stations showcase fish behaviors in another example of mutualistic symbiosis—and another example of the Lord’s handiwork.

The outer barrier reefs set the stage for a dramatic series of ecological—not evolutionary—changes called succession. In now-falsified Darwinian thinking, environments make changes in organisms. In the reality that we call creation science, organisms track and even alter their environments in predictable ecological succession. One group prepares an environment for organisms living in a different area to move in. Together they “multiply and fill” the Earth (Genesis 1).

Visitors at Pennekamp can trace four stages in ecological succession, beginning with (1) the outer reefs. These provide storm protection for (2) the sandy-bottom grass beds with their patch reefs, a shallow water habitat rich in varied life forms that delight snorkelers and swimmers. Toward shore (3) mangroves anchor the shoreline with storm-resistant roots, provide shelter for egg deposits, and protect newly hatched larvae from predators. Park visitors use canoes, kayaks, or boardwalks to explore these “nurseries of the sea.” Lastly, (4) the walking trails at Pennekamp weave through orchids, lianas, and exotic trees like mahogany in America’s premier tropical forest.

Most of Pennekamp’s dive sites and ecological zones feature God’s handiwork, but one was shaped by a human sculptor’s hands. A huge underwater statue called Christ of the Deep stands in 25 feet of water. The statue reminds us that Christ stands ready to save those “lost at sea” as well those lost on land. Whoever turns to Jesus for forgiveness of sins finds a place of peace and joy forever with Him!

* Dr. Parker is Director of Creation Adventures Museum and earned his Ed.D. in biology/minor geology from Ball State University.

Birds Inspire Flight Sensor Inventions
The Wright brothers studied wing structures of seabirds before building their first airplane, and the first helicopter is said to have been inspired...
BY: BRIAN THOMAS, PH.D.

A Four-Legged Snake?
In 2021, paleontologist Michael Caldwell of the University of Alberta in Canada stated, “There are many evolutionary questions that could be answered...
BY: FRANK SHERWIN, D.SC. (HON.)

Is Climate Change Activism a Religion?
Hawaiian Senator Mazie Hirono recently stated that people should “believe in climate change as though it’s a religion.” She then very...
BY: JAKE HEBERT, PH.D.
The Latest
NEWS   ACTS & FACTS   PODCASTS