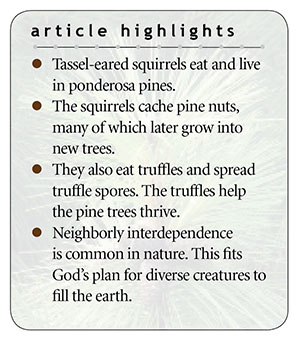 God’s creation is often misrepresented by evolutionists, so godly researchers and teachers are needed to clarify the real truth about God’s world. For example, God’s plan for interdependent biodiversity matches His mandate for living things to “be fruitful, multiply, and fill the earth.”1

Evolutionists fail to notice this caring design as they mischaracterize nature, misinterpreting creation as just a selfish mix of competitive “takers” who never “give back” to their local community. For generations, they’ve trumpeted death-driven cutthroat competition—survival of the fittest, natural selection, and selfish genes—as if death itself were the key to life on Earth. It is not.2,3 Death is not the “heartbeat” that regulates Earth’s human and animal inhabitants.

Nature is full of proofs that God has programmed His creation, even in its fallen state, to exhibit neighborly helpfulness.

Nature is full of proofs that God has programmed His creation, even in its fallen state, to exhibit neighborly helpfulness, enabling His creatures to “fill the earth.” In fact, Earth’s ecosystems exhibit a lot of care and collaboration. Even in this “groaning” world we witness helpful cooperation and resource sharing, also called mutualistic symbiosis or mutual aid. Sometimes natural neighborliness is simple, such as when two neighbors help each other.4 But more often such mutual aid interdependence is more complicated, such as in highly intricate and variable ecosystem food webs.5 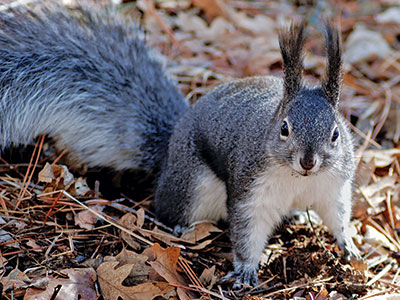 One quick illustration can be found in Grand Canyon. Its sedimentary layers commemorate God’s cataclysmic condemnation of Noah’s contemporaries, yet the canyon also displays God’s current and continuing care for His creation. This is illustrated by the relationship between a certain tree, a fungus, and a cute furry animal. Grand Canyon’s mutual aid triangle is interactively formed by the tassel-eared squirrel, the ponderosa pine, and mycorrhizal “truffles” fungus.

The tassel-eared squirrel lives mainly on ponderosa pines, using them for both food and nesting. Year-round, squirrels chew off the ends of pine branches, eating the inner bark. This “pruning” aids the pine by making it more drought tolerant [a valuable quality in the Grand Canyon]. As the squirrels harvest pine nuts, they bury some of them for later retrieval. If not recovered soon enough, these seeds sprout into new trees. The squirrels also eat truffles, a type of mycorrhizae fungus growing on pine roots. In exchange for living on the sugars in pine roots, the truffles greatly extend the pine’s ability to take up water and [soil] nutrients. The squirrels also spread truffle spores to other pine roots which benefit both the pines and the truffles, and, ultimately, the squirrels.6

The triangular “win-win-win” neighborliness of Grand Canyon’s tassel-eared squirrel, ponderosa pine, and mycorrhizal “truffles” fungus quietly carries on day after day, month after month, year after year—mostly unnoticed by human observers. The trio’s interdependence is but one example of the complex relationships we find in nature that are engineered by God Himself.

A deeper understanding of God’s world provides an effective counter to evolutionary mischaracterizations.

“The heavens declare the glory of God”7—and so does the natural neighborliness at Grand Canyon. It doesn’t showcase a death-driven ecosystem, even though it’s happening on a fallen planet. Rather, this neighborliness quietly parades God’s continuing care for His creation. A deeper understanding of God’s world provides an effective counter to evolutionary mischaracterizations.