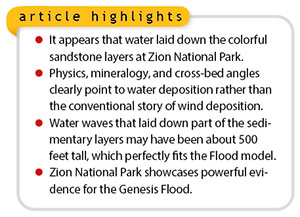 It was like driving into another world when we emerged from Zion-Mount Carmel Tunnel right at dawn. Zion National Park opened up to us in brilliant colors, and our jaws dropped at the splendor of sunlit sandstone cliffs. We joined the procession that picked its way down the switchbacks as passengers begged their vehicles’ drivers to slow down for photos of the spectacular valley walls.

How many of the millions of annual visitors wonder how and when these awesome rocks arrived? 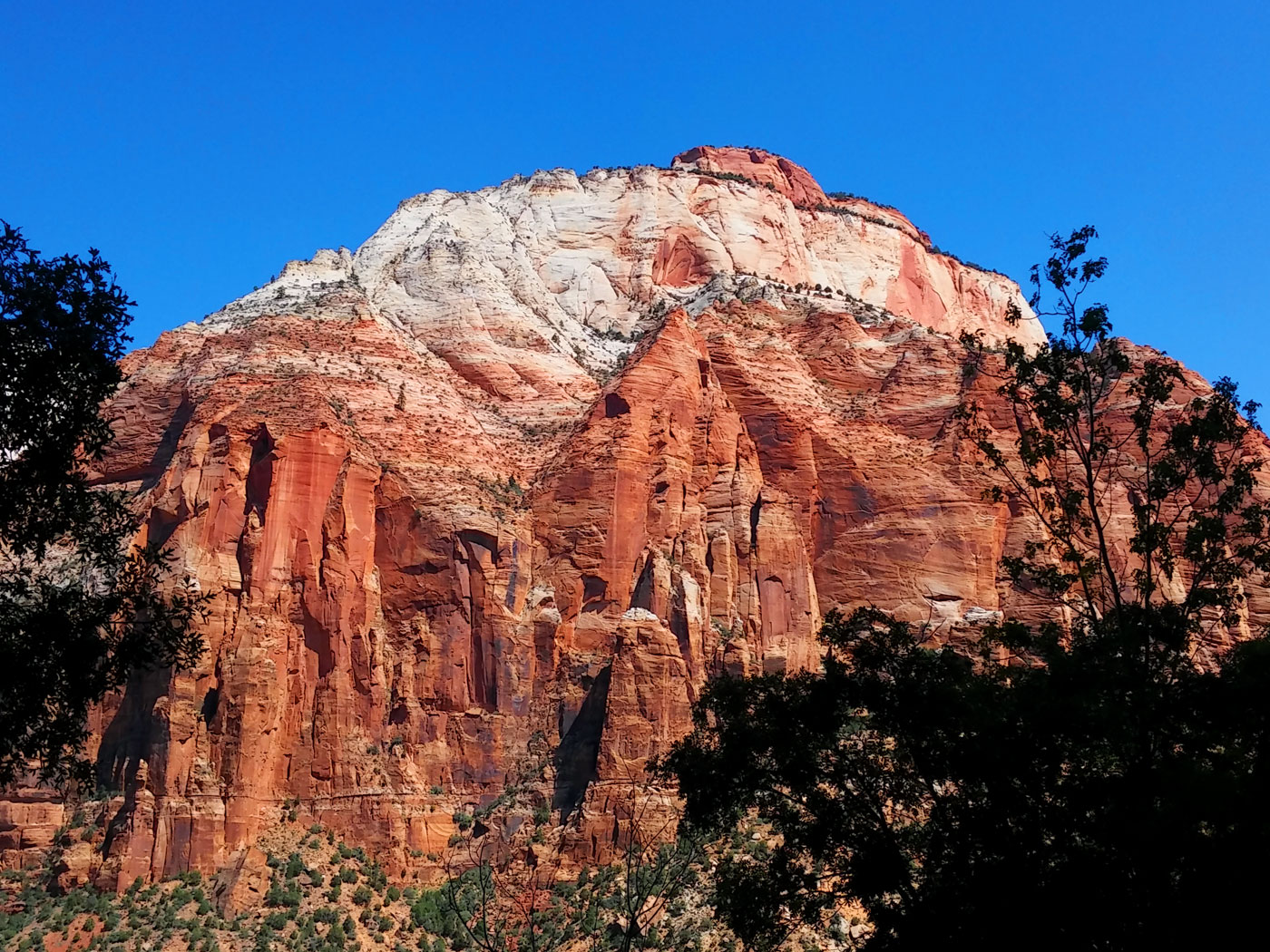 Zion National Park exposes some of the largest and clearest cross-bedded patterns among Earth’s immense and extensive sandstone layers. In the past, continuous flow piled sand dunes on top of one another, preserving the internal structures that cut at an angle across the flat bedding surfaces. Cross-bed is the technical term for this angle. The U.S. Geological Survey says about Zion’s dunes that “the cross-bedding found in the Navajo Sandstone is the result of sand being moved by wind.”1 This anticipates a vast desert. Of course, wind does build sand dunes on land, but few know that sand dunes also form underwater. Could the sandstone layers at Zion be from water? 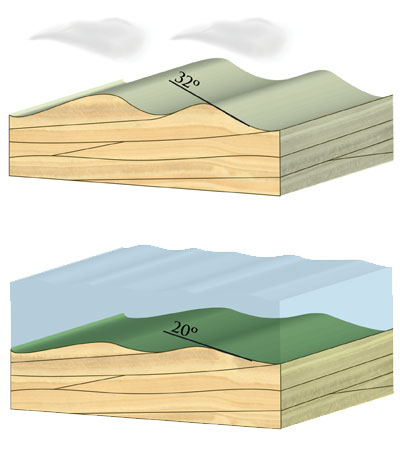 Scientists experiment with wind and water to make sand dunes in the lab. Their findings reveal a straightforward method to discern between dunes caused by wind and dunes caused by water. Figure 1 shows the key difference between these two sediment transport modes.

Generally, cross-beds form when wind or water transports sand up the gentle windward side of a dune. Sand drops as it reaches the slower flow on the leeward (downwind) side, creating a steeper slope in front. Even after the sand becomes sandstone, the sharp angles (cross-beds) against the flatter bedding below are preserved. Cross-beds formed by air are steeper than the ones formed by water.

Cross-beds from windblown sand form near the stable slope angle of dry sand at between 32° and 35° from horizontal. In contrast, angles not much greater than 20° indicate that fast-flowing water put the sand there. So, the angle measure of a cross-bed layer reveals whether wind or water formed the original dune. Figure 2 shows cross-beds from stacked dunes in a mesa at Zion. Figure 3 shows them in black and white for ease of analysis. 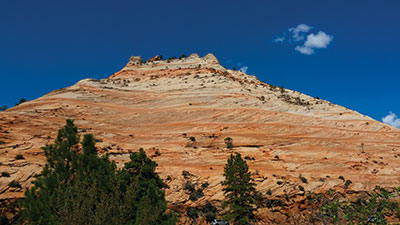 Measurements at Zion’s Checkerboard Mesa were between 17° and 16°—the angle water would have caused. The Navajo Sandstone even has limestone and dolomite mixed with some of the sandstone layers.2 These carbonate minerals form in water. The area was certainly covered in water. So much for dogmas about desert dunes in Zion. 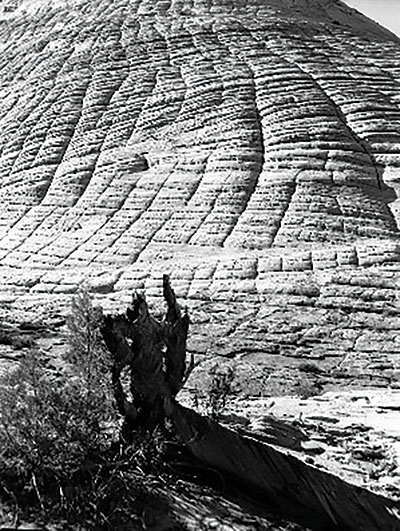 What Difference Does This Make?

If wind built these dunes long ago, then the narrative would have to change. The water-deposited rock formations found above and below them in adjacent regions suggest it took eons for deserts to replace oceans and that it took more eons for oceans to cover deserts. But empirical evidence of water-deposited rocks all the way up flushes the eons far away.

Experiments with dunes have taught us about more than just angle measurement. They’ve taught us that if the dune is bigger, the water must be deeper. Sand dune heights are equal to about one-fifth of the water depth that forms them.3 Some dunes in the Navajo Sandstone reach 95 feet high,4 meaning they formed beneath about 500 feet of fast-flowing water! The tsunamis that made these sand waves must have been gigantic—and larger than any observed in recent history. 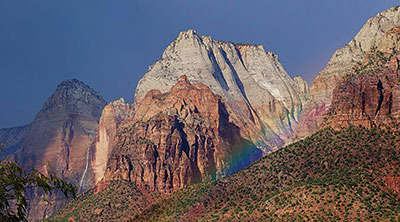 When we take the history of Scripture at face value, we can model some expectations of how Noah’s Flood transformed the landscape of the world. Then we can compare these expectations with what we find in the real world. When we see what destructive and devastating scars the Flood cut into the earth, we behold the judgment of God. As 2 Peter 3:6 says, “…by which the world that then existed perished, being flooded with water.” Here, Peter warns that since God has judged the whole world with water once already, we’d better prepare for the judgment to come. Massive, water-formed dunes bolster Peter’s warning. 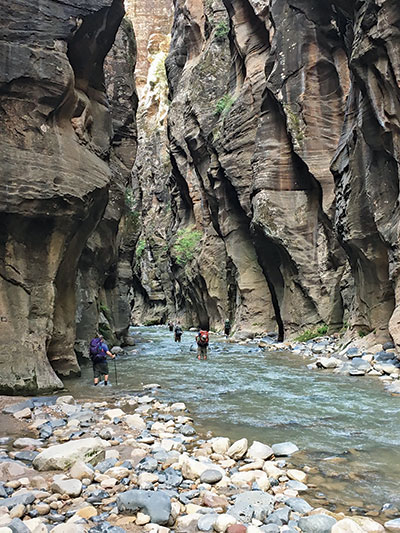 The Flood model uses data from the effects of tsunamis and amplifies the patterns of destruction. Models of waves larger than today’s tsunamis show them ripping up rocks and depositing layer upon layer of sediments for months during the Flood year.5 Water deposition in a rising flood would leave stacked sandstone layers that match the ones we observe in Zion—layers stacked flat with no erosional channels filled in.

Other stratigraphic data suggest the sandstones at Zion National Park were deposited while the floodwaters were approaching their zenith on a global scale.6 Ocean crust formed rapidly during the Flood to help push water higher and higher, generating larger and larger tsunami waves.6 This was the perfect recipe to stack thick cross-bedded sands on top of each other. The Flood model shows that the rock stack exposed at Zion formed in a few weeks during the Flood year, and experiments confirm that the model fits.

In this way, science increases confidence that the Bible’s history makes the clearest sense of our world. No wonder it also makes the most sense of spiritual realities like our need for rescue from our sins through the Lord Jesus Christ. He paid our penalty and offers everlasting life to all who repent of sin and trust in Him. Reading the clues from underwater dunes at Zion National Park increases the urgency of the message in 2 Peter 3.