Uniformitarian scientists, who ignore the Bible’s eyewitness accounts of recent creation and the Genesis Flood, claim that dozens of ice ages have occurred over the last few million years. The Milankovitch, or astronomical, theory is their main explanation for these purported ice ages. In this view, ice ages are triggered by subtle changes in the seasonal and latitudinal distribution of sunlight. These changes in turn are caused by slow changes in Earth’s orbital and rotational motions. The Milankovitch theory is today widely accepted largely because of an important paper titled “Variations in the Earth’s Orbit: Pacemaker of the Ice Ages” that was published 40 years ago last month.1

The Pacemaker paper presented an argument based on two Indian Ocean deep-sea cores that the climate was undergoing cycles of roughly 100, 42, and 23 thousand years in length. Because these are very close to the cycle lengths that Earth’s orbital and rotational motions would exhibit in an ancient solar system, the Pacemaker paper was seen as providing strong evidence for the astronomical theory.

In fact, the evidence for the role of astronomy [in climate variation] comes almost exclusively from spectral analysis. The seminal paper was published in 1976, titled, “Variations of [sic] the earth’s orbit: pacemaker of the ice ages” (Hays et al., 1976).2

Does other strong evidence for the theory exist? I suspect not, for reasons discussed below. But if evidence for the Milankovitch theory is weak, then the implications for uniformitarian dating methods are potentially devastating—and that’s no hype. 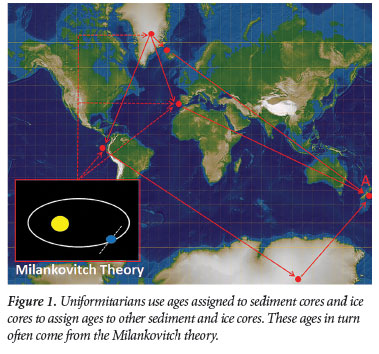 Uniformitarians generally assume the astronomical theory to be correct and use it to assign ages to seafloor sediment cores through a technique called orbital tuning.5 They then use the ages assigned to the seafloor sediments to date the deep ice cores of Greenland and Antarctica, as well as other sediment cores. For instance, uniformitarian scientists used multiple ice and deep-sea cores to assign ages to one particular deep-sea core near New Zealand (the A in Figure 1). But the dates for those other cores were ultimately tied back to the Milankovitch theory.6

Incredibly, uniformitarians even use the astronomical theory to calibrate the argon-argon radioisotope dating method!7

If the astronomical theory is wrong, then orbital tuning is nothing but circular reasoning, and all these age assignments are suspect—even for uniformitarians who believe in millions of years.

The astronomical theory is also contributing to climate change alarmism. Uniformitarian scientists believe the Milankovitch theory to be correct, but they also recognize that the subtle changes in sunlight caused by Earth’s orbital motions are too small, in and of themselves, to be the sole cause of an ice age. For this reason, many uniformitarian climate scientists have postulated “feedback mechanisms” to amplify these small variations in sunlight. For this reason, they have concluded that our climate is unstable. Creation researcher and atmospheric scientist Larry Vardiman noted:

A major result of this need for feedback mechanisms has been the development of a perspective that the earth’s climate system is extremely sensitive to minor disturbances. A relatively minor perturbation could initiate a non-linear response which might lead to another “Ice Age” or “Greenhouse.” Because of the fear that a small perturbation might lead to serious consequences, radical environmental policies on the release of smoke, chemicals, and other pollutants and the cutting of trees have been imposed by international agencies and some countries. If the basis for the Astronomical Theory is wrong, many of the more radical environmental efforts may be unjustified.8

Just when can we expect to see a rapid rise of sea level, ten times higher than the present values of a few millimeters per year? We do not know. All we can say, from experience with the many millennia of the ice-age records in the deep sea, is that once melting starts, it stimulates further melting for centuries. Deglaciation keeps going once begun in earnest: a great example of the dilemma of the sorcerer’s apprentice.9

What Berger is calling “experience” is really just a Milankovitch interpretation of the seafloor sediment data. But if the Milankovitch theory is wrong, then this argument for rapid sea level rise is invalid. This is a good example of how wrong ideas about our origins can have serious negative consequences in the present.

The Age Revision That Caused All the Trouble

The original Pacemaker paper used age estimates from a 1973 paper by Nicholas Shackleton and Neil Opdyke.10 This 1973 paper assumed that the Brunhes-Matuyama (B-M) magnetic reversal, the most recent reversal of Earth’s magnetic field, occurred 700,000 years (700 ka) ago. The date for the reversal was obtained from the potassium-argon (K-Ar) radioisotope dating method. However, in 1979, uniformitarians revised the age of the B-M reversal boundary upward to 730 ka, based on new data and revised values of the K-Ar dating constants.11

In 1990, Nicholas Shackleton and others, after orbitally tuning chemical wiggles within a Galápagos deep-sea core, recommended that the age of the B-M reversal be increased to 780,000 years.12 Another scientist, F. J. Hilgen, after attempting to orbitally tune features within a number of Mediterranean cores, made a similar recommendation.13 Therefore, the radioisotope dates were overruled and the age of the B-M reversal became 780 ka. Although this revised date was soon “confirmed” by radioisotope dating, there appears to have been little, if any, real justification for this higher age estimate at the time.14

The Dates Don’t All Agree

Uniformitarians were more than happy to use an age of 700 ka for the B-M reversal boundary, along with chemical wiggles from two Indian Ocean cores, to convince the world that the Milankovitch theory was correct. But they were unable to orbitally tune wiggles within other sediment cores unless they changed the age of the B-M reversal to 780 ka.

This is ridiculous. The B-M reversal boundary can only have one true age—not two! If uniformitarian scientists really believe that the correct age for the reversal is 780 ka, then logically they should have gone back and redone the Pacemaker analysis, as I did, taking this new age estimate into account.

Other Evidence for the Theory?

Milankovitch proponents might argue there is still strong evidence for the theory apart from the Pacemaker results. After all, many, many scientific papers dealing with the astronomical theory have been published. This is true, but most of these papers simply assume the theory is true and then attempt to draw conclusions from that assumption. There are at least four reasons to suspect that additional hard evidence for the theory is weak at best.

Second, Wolfgang Berger made an eye-opening observation regarding what he considers to be the “strongest argument yet” for the Milankovitch theory:

In the end, the correct timescale [for the marine sediment cores] was a matter of co-ordinating isotope stratigraphy with the results from palaeomagnetism, applying the date found in basalt layers for the Matuyama-Brunhes boundary to cores with known magnetic stratigraphy (as in Shackleton & Opdyke 1973). The agreement of dating by that method and by Milankovitch tuning (urged by Shackleton et al. 1990) is the strongest argument yet for the correctness of Milankovitch theory.15

As already noted, the Pacemaker authors used the results from the 1973 Shackleton and Opdyke paper to help construct the timescales for the two sediment cores in their analysis. But Shackleton and Opdyke assumed an age of 700 ka for the B-M reversal boundary. The 1990 paper by Shackleton et al. is the paper that recommended revising the age of the B-M reversal to 780 ka. Those two papers require two completely different ages for the B-M reversal boundary.16 If the “strongest argument yet” for the Milankovitch theory requires the most recent reversal of the Earth’s magnetic field to have two different ages, then it is safe to say that the theory is in serious trouble.

This is itself a third reason to suspect that evidence for the theory is weak. If one needs to arbitrarily use different ages for the same magnetic reversal to reconcile all the data with the theory (in other words, “fudging”), why should anyone take the theory seriously?

The “Pacemaker of the Ice Ages” paper has long been an iconic argument for the Milankovitch theory. Furthermore, because the astronomical theory assumes millions of years of Earth history, this well-known paper has also long been seen as supporting an old earth. However, it has been invalid for a quarter century, and other possible evidence for the astronomical theory seems weak at best. Therefore, Christians who believe the Bible’s depiction of a recent creation and a young earth should be encouraged by these results, as they are very damaging to uniformitarian dating methods. Likewise, the results give us yet another reason to question the current alarmism over the issue of climate change.