Creation scientists have long argued that the Genesis Flood is a vastly superior mechanism for explaining an Ice Age.

Secular scientists claim there have been many ice ages in Earth history, although the supposed evidence for these other ice ages is very weak. The popular secular theory for explaining these supposed ice ages is the Milankovitch, or astronomical, ice age theory. This theory claims that the timing of the ice ages is controlled by slow, gradual changes in Earth’s orbital motions.

Although the astronomical theory has serious problems, many secular scientists accept it because of a well-known 1976 paper titled “The Pacemaker of the Ice Ages.”2,3 The paper’s authors analyzed data from two Indian Ocean deep-sea cores, data which seemed to show that the climate was characterized by cycles that were about 100 thousand, 41 thousand, and 23 thousand years long. If one extrapolates Earth’s orbital motions into the distant past or distant future, these orbital motions would also exhibit cycles of these lengths. For this reason the paper was seen as providing strong evidence for the astronomical theory. This paper is so important that two prestigious scientific journals, Nature and Science, both published articles commemorating this paper’s 40th anniversary in December 2016.4,5 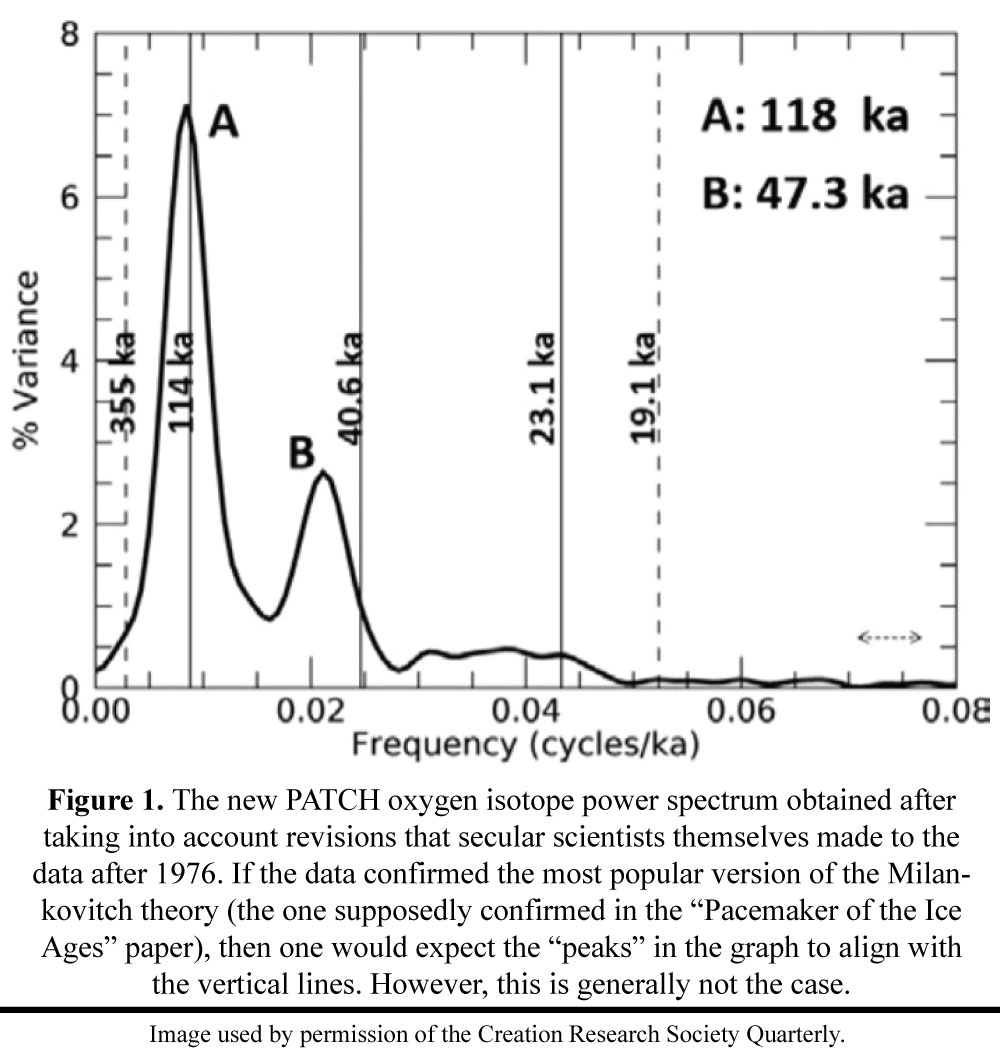 However, original ICR research revealed serious problems with this iconic paper, the most obvious of which is that the analysis depended upon an age assignment which even secular scientists no longer accept as valid!3,6 When one takes this age revision into account and re-works the calculations using the same methodology and assumptions used by the original authors, then the purported evidence for the astronomical theory is greatly weakened. This is true, even if one accepts, for the sake of argument, the vast ages that uniformitarian scientists assign to these deep-sea cores. This research may freely be read online, and it has been described in several popular-level articles in our Acts & Facts magazine.7-10

Moreover, there is a short-cut method which enables non-experts (even high school students) to verify that my most important published results are in the ballpark.11-13

However, secular scientists made more revisions to the data sets that were used in the analysis. For the sake of rigor, it seemed like a good idea for ICR to re-do the analysis taking those changes into account. These results have been recently published, and are now accessible online.14 Because these calculations took into account revisions that secular scientists have long ignored, this is arguably the most up-to-date test of the astronomical hypothesis, using these data sets, that has been performed so far. Again, it should be emphasized that these calculations were performed using the exact same methodology and assumptions made by the Pacemaker authors, but taking into account the after-the-fact revisions to the data made by secular scientists themselves.

Not surprisingly, these new results strongly disagree with the astronomical theory. The bottom line results are shown in the paper’s Figures 12 through 20. If the astronomical theory is correct, then one would expect the “peaks” and vertical lines in the graphs to align with each other. As is obvious from the accompanying figure, as well as the figures in the paper, this is almost never the case. Unfortunately, the short-cut method cannot be used to verify these particular results, due to the multiple changes made to the data sets, but it is hardly surprising that such changes would further weaken this supposed evidence for the astronomical theory.

Why is this research important? Because many secular scientists now assume the theory to be correct, the theory has become an essential dating method in their geochronology “toolkit.” Secular scientists frequently use it to assign ages to sediments and ice cores. Believe it or not, the theory is even used to calibrate dating standards that are used in one of the most popular radioisotope dating methods—argon-argon dating.15,16 Without a firm basis for the astronomical theory, hundreds, perhaps thousands, of secular age assignments are called into question, even by secular reckoning. In fact, not only are the age assignments themselves thrown into doubt, but any conclusion in any technical paper that depends on these age assignments is also called into question. This is a geochronological train wreck!

Christians today are under tremendous pressure to accept the doctrine of an old Earth. The apparent agreement between multiple, supposedly independent dating methods, is seen as powerful evidence for the secular old Earth story. But as this research demonstrates, this apparent agreement can be more superficial than real. When one looks deeper into the technical details, it becomes obvious that the methods don’t always agree.

Dr. Jake Hebert is Research Associate at the Institute for Creation Research and earned his Ph.D. in physics from the University of Texas at Dallas.