Scientists have concluded that our moon is probably still in the process of slightly shrinking as it cools.1,2

Photographs from the Lunar Reconnaissance Orbiter (LRO) showed embankments called scarps on the moon’s surface.3,4 These scarps are caused by a slight contraction of the moon’s crust as it cools. The moon’s cooling creates thrust faults which push up small sections of the surface, forming scarps.

Because these scarps sometimes distort small craters when they form, scientists inferred that the scarps formed in the relatively recent past. This is because larger meteorite impacts eventually deface or destroy smaller craters. Since these smaller craters had not yet been defaced by more recent large impacts, we know these small craters are quite young. And since the scarps distorted these young craters as the scarps formed, the scarps have to be even younger than the small craters. Secular scientists had already concluded that these scarps could be no more than a billion years old and could perhaps be less than 50 million years old.2 Such “recent” geological activity on the moon is expected if the moon is just thousands of years old, but quite surprising to secular scientists who think it’s around 4.5 billion years old.5

It now looks like the scarps are even younger than previously thought. Four seismometers left on the moon by the Apollo astronauts recorded 28 “moonquakes.” The origin of some of these quakes has long been a mystery.2 A team led by Dr. Thomas Watters of the Smithsonian Institution used an algorithm for analyzing sparse seismic data to show that eight of these lunar “moonquakes” originated within thirty kilometers of faults associated with the scarps. Moreover, six of the quakes occurred at times when peak stresses would have been likely to induce quakes.1 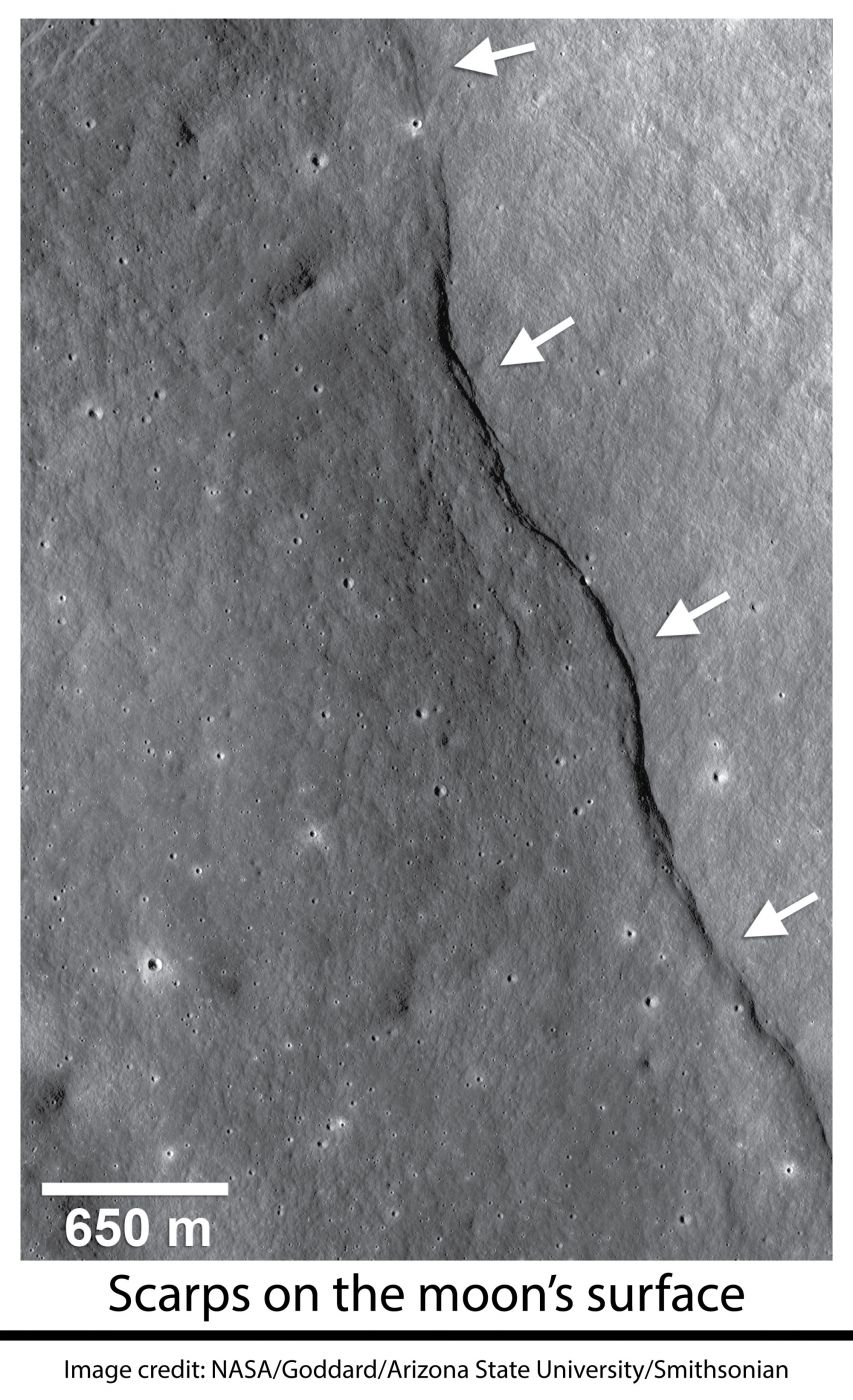 Since the Apollo missions were in the 1960s and 70s, this means that the moon has undergone true tectonic activity within the last fifty years. It also means that the moon is likely still cooling and shrinking, even today. As noted by Thomas Watters, “Our analysis gives the first evidence that these faults are still active and likely producing moonquakes today as the moon continues to gradually cool and shrink [emphases mine].”6

Why is this relevant to the origins debate? Small bodies cool off more quickly than larger bodies, and secular scientists were very much surprised that our small moon, supposedly 4.5 billion years old, could have somehow stayed “warm” for that long:

Fortunately for people planning human habitation on the moon, it’s long seemed that our tiny natural satellite is a geologically dead world. After all, you need internal heat for tectonic activity, and small rocky worlds like the moon are thought to cool much more rapidly than larger ones like Earth.2

The blurb to the above online article said, “A new look at Apollo-era seismic data revealed that the moon’s insides might be warmer than scientists thought possible.”2 Watters said, “The whole idea that a 4.6-billion-year-old rocky body like the moon has managed to stay hot enough in the interior and produce this network of faults just flies in the face of conventional wisdom.”2

Our moon is just the latest in a long list of solar system bodies that have surprised uniformitarian scientists by being warmer than expected. Mercury, Jupiter, Jupiter’s moons Ganymede and Io, Saturn’s moon Enceladus, Neptune, and Pluto head the list.7-11 Of course, if these small bodies are just thousands of years old, rather than billions, their warmth is not surprising. Moreover, there are numerous other indications of youth within our solar system, such as the “cleanness” and brightness of Saturn’s rings.12-13

Earth, our moon, and entire solar system are young, just as one would infer from a straightforward reading of Genesis.

Secular scientists had long assumed, based on their belief in billions of years, that the moon couldn’t possibly be geologically active today. Yet it apparently is. Whenever an observation contradicts the evolutionary story, secular scientists tend to put a “happy face” on the failed prediction, claiming that the result is somehow “exciting.” But they can make this claim only because being wrong has, so far, failed to have any serious consequences. NASA scientists, as well as private companies, are seriously talking about returning to the moon, and a failure to anticipate possible moonquakes would be a serious oversight if they did.

As observed by Watters, “If you’re interested in an outpost, and you expect to be there for some time, you need to be mindful that if you are too close to one of these faults, your structure is going to be shaking.”14 Fortunately, this study has alerted scientists to the possibility of significant moonquakes, one was equivalent to a 5 on the Richter scale, near these faults.1 But suppose this study had not been performed? What if a future lunar outpost, constructed near one of these faults, was damaged by an unanticipated moonquake? Would secular scientists still consider that “exciting”—especially if they lost their jobs for failing to anticipate that possibility—or, worse yet, if someone died?15

In the real world, there are consequences for being wrong over and over again. Ideas have consequences, including wrong ideas about our origins. Whether secular scientists want to admit it or not, Earth, our moon, and entire solar system are young, just as one would infer from a straightforward reading of Genesis.

Dr. Hebert is Research Associate at the Institute for Creation Research and earned his Ph.D. in physics from the University of Texas at Dallas.