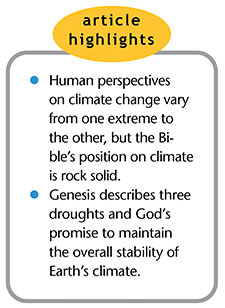 Climate change conversations squeeze their way into so many different topics, yet climate research is rife with confusion. Which scientists are right—those who say manmade pollution and greenhouse gases cause most global warming, or those who say these may only play a minor role? Even expert opinions vary to extremes. In contrast, Genesis makes confident statements about Earth’s climate.

The 2009 Climategate fiasco illustrates the confusion inside climate research.1 Extracted emails exposed how certain climate researchers suppressed the work of scientists who disagreed with them. An embarrassing placard at Glacier National Park in Montana also shows confusion. The old sign said human activity warms the world enough to melt glaciers. It stated, “Computer models indicate the glaciers will all be gone by the year 2020.” But the glaciers in the park remain today—so park officials changed the sign.2 Whether through scientific suppression or waffling words, climate science seems to shift like the daily weather forecast.

In contrast, the Word of God stands forever.3 For example, Genesis lists three big famines that fit Ice Age climate shifts. Noah’s Flood warmed oceans and powered volcanoes that caused Earth’s Ice Age.4 Centuries later, oceans cooled, volcanoes calmed, and ice sheets melted. As the Ice Age faded, the Middle East transitioned from lush to arid.5 Abram traveled across today’s Iraq to Egypt across a “well watered” land that stands dry today.6 After he arrived in Canaan, Genesis 12:10 says, “Abram went down to Egypt to dwell there, for the famine was severe in the land.” Crops won’t grow without rain. He headed to Egypt since ancient Egyptians relied more on the Nile River when rains failed to fall on their fields.

Scripture records the next major drought during Isaac’s time, saying, “There was a famine in the land, besides the first famine that was in the days of Abraham.”7 Later, the Lord used Joseph as top leader in Egypt to save many people through a third drought recorded in Genesis.8 Seven years without rain certainly counts as climate change! That extreme weather had nothing to do with industrial pollution. Scripture’s history and clues on the ground together show that today’s dry Middle East had a wet past.

While Christians should lead in protecting God’s creation, no Bible believer should buy into climate alarmism. This says that human activity can destroy the planet. What about God’s promise to Noah? After the Flood, He said, “While the earth remains, seedtime and harvest, cold and heat, winter and summer, and day and night shall not cease.”9 God promised farmable land, not a destroyed earth.

The Creator doesn’t make junk. He made Earth’s atmosphere strong enough to sustain the people He loves—even when some of those people fail to take care of His creation. Mankind makes mistakes. Our faults bleed into science and society. In contrast, three droughts and a Genesis promise show the certainty of our great Creator’s words.