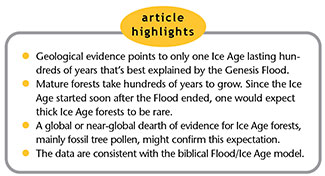 The best scientific explanation is that the Genesis Flood caused this one and only Ice Age.1 During the Flood, new seafloor formed very rapidly. Extruded magma heated the world’s oceans, greatly increasing evaporation from the sea surface. This resulted in more precipitation, including large amounts of snowfall at high latitudes and on mountaintops.

Residual volcanism continued for centuries after the Flood, and the aerosols from the explosive eruptions reflected sunlight back into space, resulting in cooler summer temperatures. The cooler summers prevented snow and ice from melting, allowing them to accumulate and form thick ice sheets. As the oceans cooled and volcanic activity decreased, the Ice Age slowly came to an end.1

Initially, the post-Flood ground would have been barren, since the world’s vegetation was destroyed by the Flood. Although grasses sprouted up fairly quickly, thick forests took much longer to grow back. One expert estimated that a self-seeded forest needs 600 to 1,000 years to take over a tract of land.2

Creationists estimate the post-Flood Ice Age lasted about 700 years. If a mature forest requires at least 600 years to grow, we might expect thick, mature forests to be rare during the Ice Age. This would be true not only in glaciated areas but also in areas not covered by ice, since insufficient time had elapsed after the Flood for forests to mature.

As we cannot directly observe the forests of the past, to answer these questions [about locations and sizes of past forests] we need to reconstruct past forests indirectly using the fossil record. This involves the study of seeds, fruits, leaves, wood, and charcoal (macrofossils) and of microscopic pollen grains, spores, cells (e.g. stomata), and charred particles (microfossils) preserved in lake, bog, alluvial, and other sediments where organic material can be preserved.3

There are uncertainties in this method. A low amount of fossil pollen is difficult to interpret, since it could indicate a small, scattered population of plants or pollen that was transported by wind from other locations. Likewise, cold temperatures and other factors cause some trees to reduce pollen production.3

We don’t know exactly how long the Ice Age lasted; the 700-year figure is an estimate. It’s possible that abundant Ice Age precipitation may have allowed some forests to grow more quickly than normal. There is also evidence that small refugia (isolated pockets) of trees existed during the Ice Age in some locations.

According to ICR’s Flood model, we expect the transition between Flood and post-Flood rocks to generally be at what secular scientists call the Pliocene/Pleistocene boundary.4 However, there will be exceptions in which this boundary is a little higher or lower in the rocks.

Keeping these caveats in mind, we ask: Is the fossil Ice Age tree pollen data broadly consistent with the biblical model?

Many Ice Age Forests Are Missing

Secular scientists have long noted that forests were rare during the Ice Age.5

Accompanying the general cooling trend of the Pliocene [the epoch just before the Pleistocene] was, as already mentioned, an increased aridity. This led to a number of noteworthy changes in the environment. The Mediterranean Sea dried up completely and remained plains and grasslands for the next several million years. Another environmental change was the replacement of many forests by grasslands.6,7

These scientists claim that the reduction of forests was due to drier and colder conditions, apparently because they don’t know how else to explain it. There doesn’t seem to be clear evidence that trees were lacking in Antarctica at the start of the Ice Age, although this is hardly surprising since any such evidence would have to be found under the thick ice sheets. But in other places, this deforestation seems to have been widespread.

Uniformitarians think Australian forests were rare during the Ice Age.

The northern ice cap formed about 2.4 Ma, resulting in a very arid phase in Australia. At this time Australia had only remnants of the closed canopy rainforests it had at the time it separated from Gondwana [the southern portion of the original supercontinent]….Overall, Australian forests and woodlands became much more restricted during glacial times, grasslands replacing many of them.8 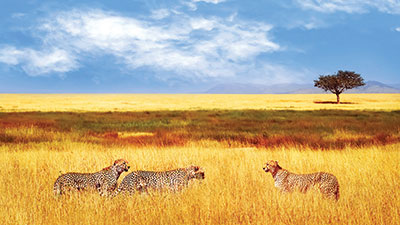 Trees are scarce on the African savannah today, and forests seem to have been rare even in tropical Africa during the Ice Age.

In tropical Africa, the Ice Ages were dominated by dry and cold conditions, especially from 1.05 Myr BP. During these dry periods, the fossil pollen record exhibits a sharp reduction in tree species in favour of grass species, suggesting that the savannah expanded and the rainforests withdrew to isolated refugia.11

One Ph.D. student described the Ice Age African rainforest as “an archipelago of trees in a sea of grass.”12

Evidence for missing Ice Age forests is strong in northern Asia and Europe.

A popular-level article describing the above research said, “Previous computer simulations of vegetation during the last ice age had suggested that trees may have persisted in ice-free areas of Europe and northern Asia. But, curiously, there has never been any sign of trees in fossils from the region.”14

In other words, secular Ice Age models expected widespread trees in ice-free areas during an Ice Age, but this was contradicted by the geological evidence. Secular scientists suggested, perhaps in desperation, that forest fires caused by careless early humans burned down these Ice Age forests!15 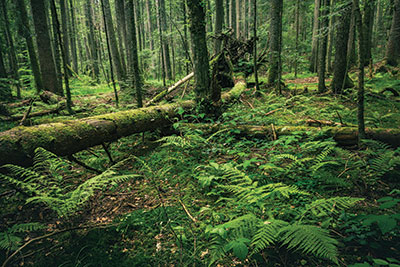 There is also strong evidence that Ice Age forests in North America were scarcer than today.

By comparing modern forests and the pollen records they leave behind to pollen records from thousands of years ago, [University of Minnesota ecologist Margaret] Davis has created a picture of ancient forests. Her meticulous studies of North America’s fossil pollen record show that although trees associated with modern forests existed many thousands of years ago, forests as we know them today—dense, continuous stands of trees whose branches form a closed canopy overhead—were likely very rare at the last glacial maximum.16

Stephen Jackson, a University of Wyoming botanist, concurs with Davis:

It appears that in upland regions, woody vegetation was indeed sparse, and canopies were relatively open. Whether this was savanna-like, with clumps of trees separated by open, non-woody vegetation, or parkland, with low tree density, remains unresolved. But I suspect, based on the pollen data, that “forests” as we think of them today were restricted [in North America during the Last Glacial Maximum] to riparian areas along rivers and other sources of water.16

Other researchers agree that “[North American] tree-cover densities during the last glacial maximum were low relative to present, and have increased since.”17 And “forest vegetation of N America and Europe has no history longer than 10 k yr [10,000 years] (at best).”18

The second statement is especially intriguing. By secular reckoning, the last Ice Age ended about 12,000 years ago. But these age scales are greatly inflated. This scientist is acknowledging that North American and European forests were generally absent until around the end of the Ice Age! By creationist reckoning, this would have been roughly 3,800 rather than 12,000 years ago—a good fit for the Bible’s timeline.

These data will come as quite a shock to many paleoclimatologists….They contradict the widespread belief that a drier climate during the last Ice Age turned the Amazon lowlands into a savannah with isolated pockets of rainforests.19 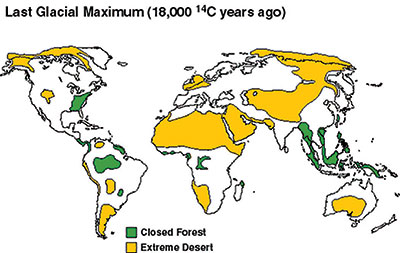 Other researchers who think there were significant Ice Age rainforests in tropical South America nevertheless acknowledge that there were “biome shifts largely associated with ecotonal areas [transitional areas between two different biomes]—downslope expansion of montane [mountain] grasslands in the Andes at the expense of montane forest, and savanna expansion at the expense of rainforest and gallery forest at the Amazon basin margins.”20

In other words, in both the Andes and Amazon regions of South America, grasslands were more widespread and forests smaller than today. It’s possible that varying amounts of Ice Age rainfall in different locations may have caused these forests to grow faster than in other locations, but it’s also possible that secular researchers are misinterpreting the small amount of data available. Researchers have described an “extreme paucity”20 of “meagre”21 South American Last Glacial Maximum22 pollen data, particularly in the Amazon. So, South America may have been an exception to the rule, but even this exception is uncertain. 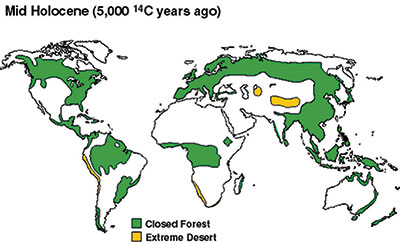 Figures 1 and 2 show secular estimates for the locations of thick forests both at the peak of the Ice Age (Last Glacial Maximum) and after the Ice Age. Since all the trees on Earth were uprooted during the Flood, and since mature forests take hundreds of years to grow back, thick Ice Age forests should have been rare. Although this is an ongoing area of research, preliminary results seem to broadly support this conclusion and match the biblical Flood/Ice Age model.