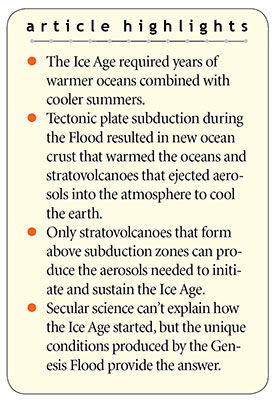 Creation meteorologist Michael Oard has written extensively about what it takes to make an ice age. The first requirement is much warmer oceans than we have today, which would provide the extra evaporation needed for heavy winter snowfall. The second requirement is cooler summers that allow snow to build up from year to year and eventually transform into thick ice sheets.1

But what would warm the oceans? And what could cause cooler summers for many years in a row? Catastrophic plate tectonics provides the answer for both warmer oceans and cooler summers. Such tectonic activity was apparently the mechanism God used to implement the global Flood.2,3 During the Flood, plates rapidly subducted into Earth’s mantle and formed hot new seafloor at the ocean ridges. The result was a peak in ocean heating and volcanism at the same time.

If an explosive volcanic eruption is large enough, it can cool Earth by blocking out sunlight. For example, the 1815 eruption of Mount Tambora in Indonesia caused the “year without a summer” across Europe in 1816. Michael Oard refers to this temporary cooling of Earth as the “anti-greenhouse” effect.4 However, that particular cooling resulted from a single large explosive eruption. An ice age needs sustained eruptions of that kind over many decades or even centuries.

Not just any volcanism would accomplish this. Volcanoes are not all the same. The most common types of volcanoes across most of the ocean basins have basalt-rich magmas and are less capable of producing the explosions necessary to generate sun-blocking ash and aerosols (tiny particles or droplets).5 That kind of explosion needs the specific, volatile, silica-rich magmas generated by partial melts at subduction zones. So, what could cause enough of this kind of volcanic activity to produce an ice age?

The answer is the rapid subduction involved in catastrophic plate tectonics. Stratovolcanoes form above subduction zones as ocean lithosphere is pulled down into Earth’s mantle. The heat of the mantle causes a partial melting of the crust. The first minerals to melt are those with the lowest melting points, such as quartz, feldspar, and biotite—the main components of granite—resulting in a granitic (silica-enriched) magma.

Stratovolcano eruptions often emit large amounts of sulfur dioxide gas. Chemical reactions in the atmosphere form sulfuric acid droplets, which can remain in the stratosphere for two to three years. Subduction also introduces a lot of water into the melt, increasing the volatility of the magma. Granitic melt then rises and erupts catastrophically, sending ash and aerosols high into the atmosphere. The explosive volcanoes that accompanied subduction during the Flood, as well as their continued eruptions through the early post-Flood period, provided the aerosols needed for many years of summer cooling.

The two conditions that result in an ice age must be met simultaneously—centuries’ worth of silica-rich volcanism to produce aerosols to cool Earth, and heating of the ocean to cause higher evaporation rates and the snowfall necessary to make the massive continental ice sheets. Together, these factors created the perfect conditions for the Ice Age. Then, as the ocean crust and the water above slowly cooled and volcanic activity diminished during the centuries after the Flood, the Ice Age ended.4

The Flood described in Genesis provides the framework we need to decipher Earth’s past.

The subduction process and its results were no coincidence or accident. Secular science struggles to explain the Ice Age. But for those who affirm the historicity of God’s Word, it’s no mystery. The Flood described in Genesis provides the framework we need to decipher Earth’s past.