The Natural Direction of Life Is Degeneration, Not Evolution | The Institute for Creation Research
Skip to main content

The Natural Direction of Life Is Degeneration, Not Evolution

Mutations lead to the loss of genetic information and consequently the loss of genetic potential. This results in what is termed “genetic load” for a population of organisms. Genetic load is the amount of mutation in a kind of organism that affects its fitness for a particular environment. As genetic load increases, the fitness decreases and the organism progresses towards extinction as it is unable to compete with other organisms for resources such as food and living space. 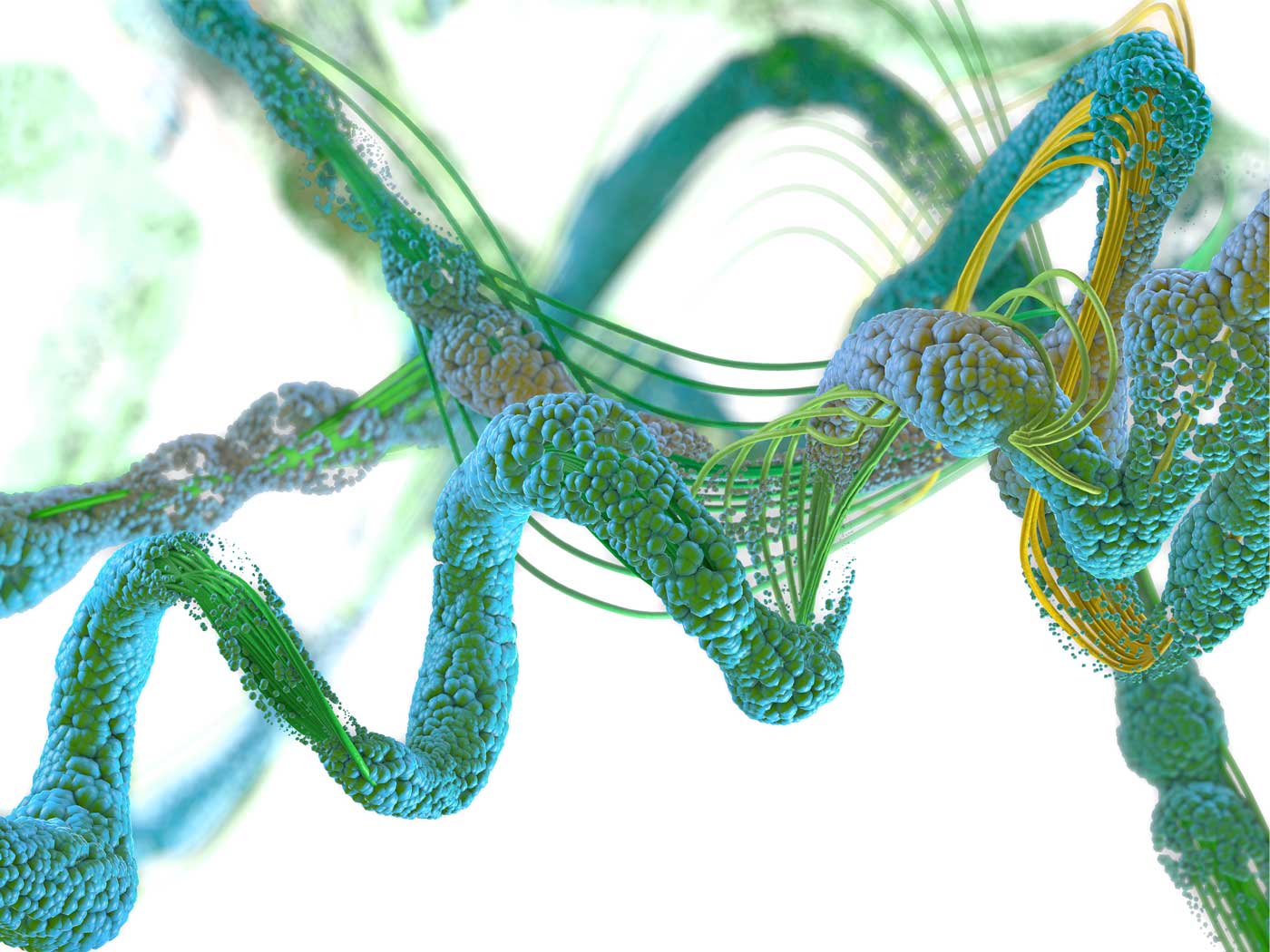 Life Is More Than Biomolecules
In order to have evolution, you must first have life. Both sides of the evolution-creation debate agree that the chance of all the correct biomolecules coming together by chance to form even the simplest...
BY: EDWARD SIEBERT, PH.D.

Mutation, Design & Randomness
Article highlights: • A genetic mutation is a change—most are bad and some are good. • Evolutionists claim that good mutations come from random processes. • Genetic mutations...
BY: MICHAEL STAMP

Mammoth Extinction and Extinct Peoples
Wooly mammoths once roamed North America, northern Europe, and Siberia. Possibly the last of their kind perished as a dwindling population on Wrangel Island, northeast of Siberia. Who wouldn’t...
BY: BRIAN THOMAS, PH.D.

Unlocking the Origins of Snake Venom
The origin of snake venom has been a long-time mystery to both creationists and evolutionists. Interestingly, new research confirms that the same genes that encode snake venom proteins are active in...
BY: JEFFREY P. TOMKINS, PH.D.

Did God Make the Ebola Virus?
When this article was written, the number of West Africans who contract the deadly Ebola virus was doubling about every three and a half weeks, making it the worst outbreak of the disease since the...
BY: BRIAN THOMAS, PH.D.

Are We Evolving Stupidity?
Are we dumber than our grandparents? Social psychologists are tracking IQ scores and noticed a decline in the last decade after a steady rise since the 1950s. Some wonder if the recent downturn...
BY: BRIAN THOMAS, PH.D.

Fungal Parasitism Marked by Gene Loss, Not Gain
Certain types of fungi can be parasitic to both plants and animals. Two new studies show that this has developed, in part, by a loss of genetic information—not a gain as predicted by evolution.1,2 In...
BY: JEFFREY P. TOMKINS, PH.D.

Decoding Snake-Venom Origins
The origin of snake venom has long been a mystery to both creationists and evolutionists. However, by stepping outside the standard research paradigm, scientists recently showed that snake venom proteins...
BY: JEFFREY P. TOMKINS, PH.D.

People Not Quite as Clever Anymore
Wouldn't it be interesting to compare our cleverness to that of our ancestors? It would only be possible if today's researchers could use the same measuring tool in the same way that previous...
BY: BRIAN THOMAS, PH.D.

Evolution Made Cavefish Go Blind?
Evolution maintains that as more time passes, living things evolve to acquire better and more useful traits. As such, shouldn't the loss of a useful trait, such as eyesight, be regarded as the opposite...
BY: BRIAN THOMAS, PH.D.

Study Finds Molecules Evolving in Wrong Direction
Which is more complex—a typical man walking across a street, or a blind man carrying a legless man across the street? The blind and legless partners are more complex simply because they have...
BY: BRIAN THOMAS, PH.D.

Why Would Parasitic Worms Help Bowel Disease?
According to a recent report, one biotech company has plans to test and market a rather unusual treatment for certain autoimmune intestinal ailments like Crohn's disease—a concoction containing the eggs...
BY: BRIAN THOMAS, PH.D.

Mutation Study Contradicts Evolution
Biology textbooks teach that mutations added the high-quality genetic information needed to transmutate a fish into a monkey—even though experiments have shown that mutations merely corrupt the information...
BY: BRIAN THOMAS, PH.D.

Butterfly Evolution in Action? Not Likely.
One hundred and fifty years ago, Charles Darwin published his proposal that all creatures on earth emerged naturally from a common ancestor through a process of gradual change. Although this hypothesis...
BY: BRIAN THOMAS, PH.D.

Did God Create Aggressive Behavior?
At the close of the creation week, the first chapter of Genesis records that “God saw every thing that he had made, and, behold, it was very good.”1 But some aspects of today’s...
BY: BRIAN THOMAS, PH.D.

Is the H1N1 Flu Evolving?
Flu is in the news, with some people fearing a possible pandemic from the latest strain. The most recent threat, initially labeled “swine flu,” comes from an H1N1 influenza virus, the same...
BY: BRIAN THOMAS, PH.D.

Mimicking Molecules Manifest a Maker
A recent study discovered that certain molecules mimic the exact shapes of other molecules, allowing them to interact in a way that protects the genetic integrity of their host organism. Researchers discovered...
BY: BRIAN THOMAS, PH.D.

Fish Studies Answer Flood Question
According to the Bible, the world before Noah’s Flood, including the oceans, must have been idyllic. That was destroyed by the year-long global deluge, during which the earth’s land mass broke...
BY: BRIAN THOMAS, PH.D.

The Confusing Origin of Locust Swarms
Certain grasshoppers are generally mild-mannered and solitary creatures.1 However, when their population becomes dense enough, their bodies physically change and they clump together, sometimes...
BY: BRIAN THOMAS, PH.D.

Where Did Flesh-eating Bacteria Come From?
Flesh-eating zombies may be the work of science fiction horror, but necrotizing soft tissue infection—a severe type of infection that destroys tissue—is a real condition that can kill about...
BY: BRIAN THOMAS, PH.D.

Corrupted Chemical Communication Causes Disease
By Brian Thomas, M. S. and Christine Dao* Broken communication seems to be the cause of many diseases, not bad bacteria, according to research from the University of Wisconsin. Microbiologist Margaret...
BY:  VARIOUS AUTHORS

What If Evolution Were True?
What if all life evolved from a common ancestor by means of gradual changes as Darwin suggested? What evidence would we expect to find? Certainly we would expect to find the fossilized remains of the...
BY: JOHN D. MORRIS, PH.D.

Those Amazing G Protein Receptors
Using freeze-fracturing and an electron microscope, researchers can indirectly view the plasma membrane of a human cell. What is revealed are large, globular protein molecules that stud the bi-lipid...
BY: FRANK SHERWIN, D.SC. (HON.)

How Old Is Life?
According to evolution, life has been on Earth for billions of years. It is common to claim that life originated some three to four billion years ago. Even though spontaneous generation of life has been...
BY: JOHN D. MORRIS, PH.D.
Creation, Corruption, and Cholera
The creation model continues to take shape as contributions from various scientific fields are analyzed from a more rewarding non-Darwinian perspective. Creation scientists suggest the pathogenic bacteria...
BY: FRANK SHERWIN, D.SC. (HON.)

Irrational Naturalism
One of the most disturbing attitudes of most evolutionists is their insistence on naturalism as the premise for explaining everything from the origin of the cosmos to the origin of the human soul. The...
BY: HENRY M. MORRIS, PH.D.

The Scientific Case against Evolution: A Summary* Part 2
We have noted from the statements of leading evolutionary scientists that no true vertical evolution from one kind of organism to a more complex kind has ever been observed in all human history. Similar...
BY: HENRY M. MORRIS, PH.D.
Cancer and the Curse
"And lest I should be exalted above measure through the abundance of the revelations, there was given to me a thorn in the flesh, the messenger of Satan to buffet me, lest I should be exalted above...
BY: DAVID DEMICK, M.D.

The Scientific Case Against Evolution: A Summary* Part 1
Belief in evolution is a remarkable phenomenon. It is a belief passionately defended by the scientific establishment, despite the lack of any observable scientific evidence for macroevolution (that...
BY: HENRY M. MORRIS, PH.D.

What Can Be Done To Help Endangered Species?
It seems like every time we turn around these days, we're bombarded with the news of another endangered species. From the tiny snail darter to the beautiful spotted owl, the "rights" of...
BY: JOHN D. MORRIS, PH.D.

Are Things Getting Better or Are They Running Down?
One of the very strongest arguments against evolution has always been the tendency for every system, living or dead, individual or societal, moral or mundane, to wear out, deteriorate, or die. As is...
BY: JOHN D. MORRIS, PH.D.

Creation, Selection, and Variation
Horses only 15 inches high, 141 tree species in a single acre of tropical rain forest—what spectacular variety we see among living things, both variation within kind and the stupendous number of...
BY: GARY PARKER, ED.D.