Did God Make the Ebola Virus? | The Institute for Creation Research
Skip to main content

When this article was written, the number of West Africans who contract the deadly Ebola virus was doubling about every three and a half weeks, making it the worst outbreak of the disease since the first recorded occurrence in 1976.1 Several new cases in Dallas, including two nurses who treated the late Thomas Duncan, fuel public anxiety as well as curiosity over Ebola. Where did this virus come from?

Oddly enough it may have been transferred to humans from bats. Three species of West African fruit bats showed no symptoms when researchers infected them with Ebola virus. Out of 1,030 animals—including birds, small mammals, and 679 bats—members of three bat species showed signs that they are the "reservoirs of Ebola virus."2

Like bird or swine flu viruses, which cause no symptoms in the chickens or pigs from which they emerge, Ebola viruses appear to have become harmful when transferred to other animals and man. Prior outbreaks in equatorial Africa saw Ebola wreaking havoc in animals or people who may have come into contact with fruit bats or perhaps partly eaten fruit the bats dropped to the forest floor. 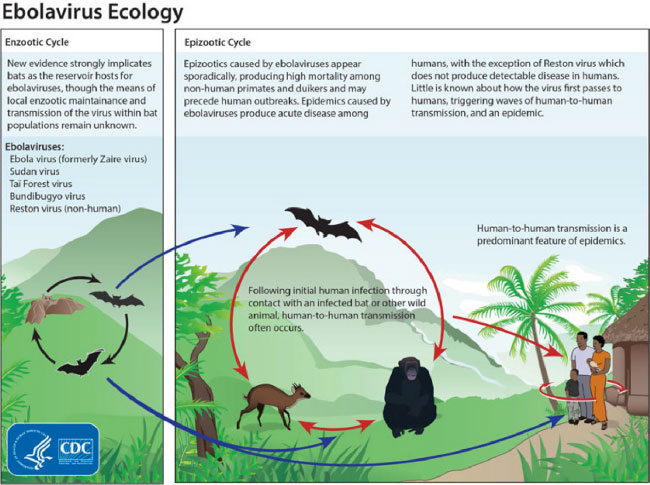 How does the existence of Ebola square with the originally "very good" creation? In other words, why would Ebola exist in bats in the first place if our good God made bats? Like many currently pathogenic microbes and viruses, the original Ebola may have possessed a function that was actually helpful. But now, in the post-Fall world, it has become pathogenic. It's rather like Swedish industrialist Alfred Nobel's invention of dynamite, which he intended for mining and construction, but that others readily repurposed for war. Further research may reveal what Ebola's created purpose might have been.3

Alternatively, Ebola may represent a degraded version of a virus that has no pathogenicity. Or Ebola may have been designed to exist in bats and not in humans, but a barrier to transmission between hosts in the pre-Fall world has since been lost due to Adam and Eve's sin. These hypotheses and others are still under investigation, and genetic research might bring the most likely explanation to light.