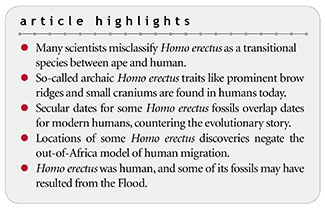 The archaic human species Homo erectus has been portrayed as an important ape-to-man transitional link. However, these fossils don’t provide any real evidence of evolution. Many paleontologists and a majority of creationists think their unusual features are nothing more than variants of human traits and not transitional at all. Even more, some of them have been found in remote isolated island locations far from Africa and dated by secular calculations at up to 1.9 million years old. This completely derails the evolutionary story that humans migrated out of Africa just a few hundred thousand years ago. A biblical model of human origins provides a much better fit for the data.

How Homo erectus  Got Going 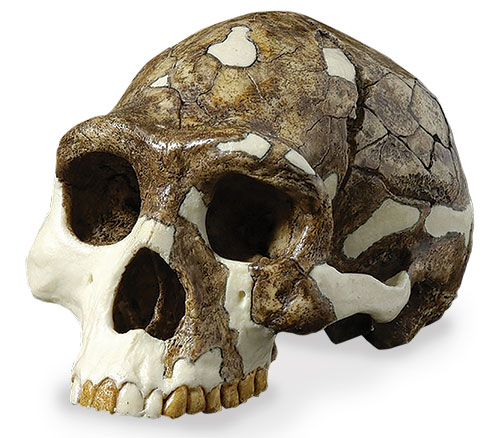 The first Homo erectus finds were given the names Java Man and Peking Man.1,2 Eugène Dubois, a Dutch medical doctor and anatomist, made his famous discovery in 1891 on the island of Java and originally called it Pithecanthropus erectus. His Java Man consisted of just a skullcap, a thigh bone, and a molar tooth found separately in the same layer of volcanic ash. In fact, the skull and thigh bone were about 50 feet apart, but Dubois concluded they belonged to the same individual. An ardent evolutionist and Darwin fan, he immediately claimed he’d found a transitional form. His argument was based primarily on the skullcap’s pronounced brow ridge and size. It was smaller than the average modern human but still well within the known variation for humans. The thigh bone was identical to modern humans.

Specimens of Peking Man, also known as Homo erectus pekinensis (formerly Sinanthropus pekinensis), were discovered between 1923 and 1937 during excavations near Beijing.1,2 These fossils have been given evolutionary dates ranging from 680,000 to 780,000 years old.3,4 The sum fossil total from this work includes six nearly complete crania, 15 partial crania, 11 mandibles (jaws), many teeth, some skeletal bones, and a large number of stone tools.1,2 Modern human fossils were also found in an upper cave at the same site in 1933.

After these initial discoveries in Asia, similar fossil skulls were found throughout eastern Africa. First promoted under the name Homo ergaster, it’s now widely accepted that H. ergaster is the African form of H. erectus. The most complete H. erectus fossil was discovered in 1984 near Lake Turkana in Kenya.5 Known as Turkana Boy, this fossil’s skull features were similar to H. erectus, but its body was essentially identical to modern humans. Most researchers now agree the skeleton was from a juvenile of about 10 to 12 years of age who would have achieved a normal human height of close to six feet at maturity. The generally accepted evolutionary age of this fossil is about 1.6 million years—slightly younger than the Java Man fossils.

The other major group of H. erectus fossils was discovered between 1991 and 2005 in archaeological excavations near the city of Dmanisi, Georgia, northwest of Turkey and situated between the Black and Caspian Seas. According to evolutionary dating, the five crania and four mandibles are about 1.8 million years old.2,6 Although the fossils have been placed in the H. erectus category, the extreme size and shape variation of the skulls has caused controversy. In fact, evolutionists note that due to this variability, if the skulls hadn’t been found close to one another and in the same rock layer, they would have been placed in different species categories. Several of the skulls look as though there may have been some sort of disease pathology at work.

The entire story of H. erectus is essentially built on about 300 very fragmentary fossils. The majority of these are nothing more than partial skulls, teeth, and broken bones. The only nearly complete H. erectus fossil is Turkana Boy, whose post-cranial skeleton was found to be nearly identical to modern humans.

Based on the diverse skull fragments and a few nearly complete crania, the defining features of H. erectus are a prominent brow ridge, a sloping forehead, reduced chin, more constricted temples than typical humans, larger teeth, forward-projecting jaw (prognathism), and cranial capacities on the lower end of the normal human-size spectrum.2 In fact, one could say that H. erectus skulls are shaped similarly to Neanderthal craniums except that instead of being larger compared to modern humans, their heads were on average generally smaller. However, H. erectus cranial volume is still within the same range as modern humans. Research has shown that, in general, human or animal intelligence is not based on brain size but on creature-specific organizational properties.2 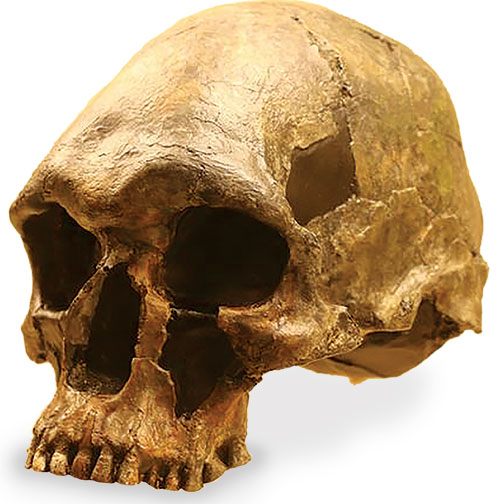 In 1972, the fossil remains of about 50 Aboriginal humans were discovered at a burial site in the Kow Swamp region of Northern Victoria, Australia.2,7 The researchers who reported the discovery described a distinct set of so-called archaic human traits “not seen in recent Aboriginal crania” that closely paralleled the traits of classic H. erectus. These included prominent brow ridges, sloping foreheads, prognathism, large teeth, and a minimal chin. But most importantly, along with the reported “archaic” features, the researchers claimed a very recent date by evolutionary standards for these fossils. The scientists in the report stated, “Analysis of the cranial morphology of more than thirty individuals reveals the survival of Homo erectus  features in Australia until as recently as 10,000 years ago.”7

In a 2006 finding in Mongolia, researchers reported a skullcap whose “analysis shows similarities with Neanderthals, Chinese Homo erectus, and West/Far East archaic Homo sapiens.”8 Just like the Kow Swamp fossils, the evolutionary dates don’t fall within the range of typical H. erectus. The most recent study of the Mongolian fossil now lists it at about 34,000 years old—a time considered very recent in the human evolutionary spectrum and on par with the Kow Swamp fossils.

The problem with both of these fossil discoveries is that evolutionarily speaking they have been put in the same age range as very recent anatomically modern humans. Had they been dated at one to two million years, they would have been considered bona fide H. erectus because they would then fit the evolutionary narrative. As things stand, they are considered mere anomalies to be swept under the rug to maintain the evolutionary myth that so-called archaic human traits disappeared long ago.

Secular scientists have discovered a human skull from Jebel Irhoud, Morocco, defined as having “anatomically modern” features and dated at over 300,000 years old.9 This, combined with the fact of very “recent” humans with archaic features (the Kow Swamp and Mongolian fossils), highlights severe inconsistencies in the human evolution story.

If one wants to accept the evolutionary timeline, then H. erectus-like humans with archaic features and humans with anatomically modern features have hung out together on Earth for a long time, even up to the very recent past. But it gets even worse for the evolutionary picture because so-called archaic traits like prominent brow ridges, sloping foreheads, prognathism, and small craniums can still be found in living humans.10

Not only is there strong anatomical evidence that H. erectus fossils are just a variant of the human kind, there is also copious archaeological evidence that they were highly intelligent and exhibited a broad range of human behaviors. The condensed list below is based on an extensive scientific literature survey published in 2017.2

The H. erectus fossil presence in China and southeast Asia, particularly on remote islands like Java, causes major problems for the reigning human evolutionary migration paradigm. First of all, it’s obvious that intelligent seafaring humans made the journey over long stretches of open ocean to reach these islands. And if we accept the deep-time dating of H. erectus at up to two million years in remote places like this, then there are severe evolutionary time frame discrepancies.

For one thing, the supposed initial phase of human evolution is represented by the ape-like Australopithecus, which overlaps significantly in time with H. erectus. If they coexisted, how could one have been the evolutionary predecessor of the other? Even worse is the problem it presents for the current out-of-Africa model. This model proposes that humans migrated from Africa only about 100,000 to 200,000 years ago. But if that is the case, then how could they have existed on remote southeast Asian islands two million years before that?

Homo erectus Was Human After All

Not only is the H. erectus fossil record fragmentary and incomplete, but the bulk of the data indicates this category is simply a variant of the human kind. As mentioned above, so-called archaic H. erectus traits can still be found in humans today. Even many evolutionists recognize this. A recent article stated, “If you bumped into a Homo erectus in the street you might not recognise [sic] them as being very different from you.”11

So, if H. erectus was fully human and the evolutionary narratives and timelines don’t make sense even within a secular worldview, how does this fit with the Bible? First of all, the Scriptures are quite clear that God created an ancestral human couple uniquely in His image on the sixth day of the creation week. We also know that death, sin, and corruption entered the picture when Adam and Eve rebelled (Genesis 3). As the human population grew, people became so wicked that God destroyed the world in a global flood. It’s possible that some of the H. erectus fossils may have been humans buried in the highest sedimentary layers of Flood rock, exactly where we would expect them.

Alternatively, some H. erectus fossils may have been from specific people groups that dispersed from the Tower of Babel after the Flood. The Kow Swamp burial site would be a good example. When human languages were confused at Babel, the resulting isolated groups would have led to a large number of genetic bottlenecks and lineages of humans with unique suites of trait variations such as skin color, skeletal sizes, and skull shape variations. Some creation scientists also speculate that genetic abnormalities would have surfaced more rapidly in small, isolated, inbred populations, which may explain some of the unusual variations seen in H. erectus skulls.2

Clearly, the biblical account of human creation and Earth history offers a much more satisfying framework in which to place human fossil discoveries than the scientifically flawed evolutionary narrative.