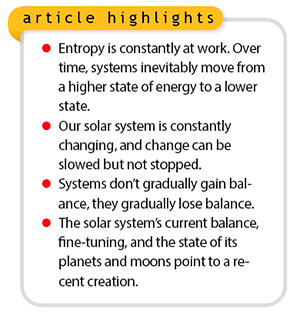 Imagine opening a door to a room and seeing a plate spinning on a stick with a spin rate that makes it wobble. Then imagine you shut the door and go back in time three minutes. What would you expect to see when you open the door the second time? The plate’s wobble would be less pronounced, perhaps even unnoticeable. Why? Because going back in time would allow you to see the plate spinning faster. In other words, back then it had more energy that would’ve added stability to the spin.

Now apply this scenario to our solar system. If we were able to go back in time a billion hypothetical years, would we see the solar system in a better balance—a more perfect state of balance—than it is today? The issue that makes this question perplexing is this: Our solar system is currently in a relatively perfect state of balance. The system is finely tuned now. Wouldn’t even a small amount of time have disrupted this perfection?

Even though fine-tuned processes keep the overall balance intact, our universe quietly transforms over time. The orbits of Earth, our moon, the solar system planets and their moons, and even the burn of the sun and other stars are constantly changing.1 The magnetic fields possessed by many planets and moons measurably change over time.2 With each passing year, our moon slides slightly farther away from Earth.3 There aren’t enough supernova remnants from the billions of supposed stars that would’ve died out if the universe were billions of years old—and blue stars can only last a couple million years.4 Most of these changes are quite slow and virtually imperceptible from day to day, but the bodies in the heavens continually change. 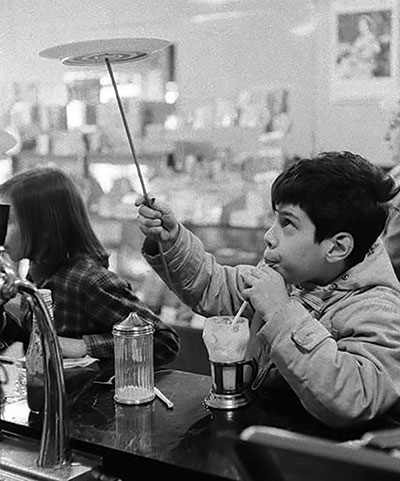 Systems don’t gain balance over time, they lose it. Disruptions on average overwhelmingly destabilize systems. Like the twirling plate, things are slowly but surely going out of balance. Entropy, erosion, and decay slide incessantly down the slope toward chaos, and these rates are largely estimable. Change can be slowed but not stopped. There is no such thing as suspended animation in our universe—that’s the stuff of science fiction.

What does the spinning plate scenario point to? If our solar system is in perfect balance now, any change in one direction or the other is almost certainly a movement toward less balance. A thousand elapsed years equals a thousand years of constant change. A billion years would mean that much more change, and Earth and our solar system simply do not reflect that amount of change. Incessant change points to recent creation. Our solar system is in perfect balance now because it was set up in that state a short time ago.

What would we see if we shut the door on the twirling plate again and traveled back in time three more minutes? We might very well see the plate twirler setting the plate in motion atop the stick. What would we see if we were able to travel back in time about 6,000 years? We would see the Plate Twirler creating and setting the solar system in motion.

Our universe is the way it is because the Creator made it so. “He stretches out the north over empty space; He hangs the earth on nothing” (Job 26:7).