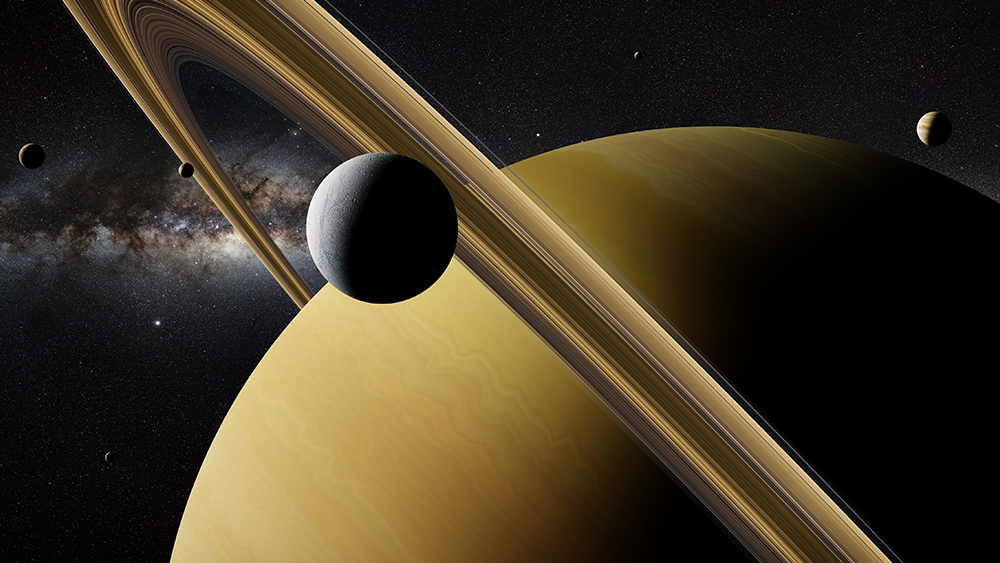 NEWS     CREATION SCIENCE UPDATE     EVIDENCE FOR CREATION     THE SOLAR SYSTEM MUST HAVE BEEN CREATED     ASTRONOMY     SCIENCE
Saturn’s Moons Continue to Challenge Secular Theorists
BY JAKE HEBERT, PH.D. *  |
MONDAY, SEPTEMBER 27, 2021
A recent article in Sky & Telescope magazine explains why secular theorists have difficulty agreeing on the ages of Saturn’s moons.1 In the process, the article provides a reminder that Saturn’s rings are young. It also presents possible evidence that some of Saturn’s moons are also young. Most important, it highlights the fact that (incorrect) secular origins stories spanning alleged histories of billions of years are almost certain to contradict themselves.

The article begins by briefly describing two main arguments for Saturn’s rings being young: the cleanness and brightness of the rings, as well as the fact that the rings are being destroyed fairly quickly.1 Both of these arguments for a young ring system have been discussed in previous Creation Science Updates.2,3 Some secular scientists are insisting that the maximum possible age for Saturn’s rings is about 100 million years. Of course, the rings could be younger than this, even as young as 6,000 years, in agreement with the testimony of Scripture.

However, as noted by David Coppedge, a former systems administrator at the Jet Propulsion Laboratory (JPL) and a team leader on the Cassini spacecraft mission to Saturn, secular scientists are generally uncomfortable with young rings for Saturn, as young rings are apparently harder for them to explain.4 This “general sense of discomfort” is acknowledged in the Sky & Telescope article.1 If the rings are indeed young, theorists would likely try to explain it as the result of a collision, despite this being an unlikely event:


Yet the precipitating event [for the recent formation of Saturn’s rings]—a moon-sized collision—would have been so rare that many scientists remain uneasy with the idea of young rings. Even those in favor of a past collision acknowledge this, such as [astrophysicist] John Dubinsky (then at University of Toronto), who qualified such an event in a 2019 study as “perhaps unlikely, but not wildly so.”1

Because secular theorists link the formation of Saturn’s rings to the formation or destruction of its moons, questions about the age of the rings tie in to questions about the ages of the moons. The article notes that one of Saturn’s mid-sized moons, Rhea, is receding away from Saturn ten times faster than previously thought.1 Likewise, Titan was found to have been receding from Saturn a hundred times faster than previously thought.1,5 This is a potential problem for secular origin stories, as it is conceivable that running the calculations backwards might place the moons close enough to Saturn to have resulted in their destruction billions of years ago. However, these calculations are very complicated, and it is quite possible that the recession rates might have been lower in the past.

However, even if these moons would not have been destroyed, high recession rates still pose potential problems to secular theorists. For instance, secular attempts to explain Titan’s origin have traditionally placed the primordial moon very close to its current location. A high recession rate for Titan calls such origin stories into question:


Most prior work had predicted that moons like Titan, or Jupiter’s moon Callisto, were formed at an orbital distance similar to where we see them now [emphasis mine]… This implies that the Saturnian moon system, and potentially its rings, have formed and evolved much more dynamically than previously believed.5

Moreover, effects called tidal interactions should theoretically have caused the moons Tethys and Dione to have entered a state called “stable resonance” about 100 million years ago, in which Dione orbits Saturn three times for every two orbits of Tethys. This would have also caused greater tilts in their rotation axes. Yet these effects have not been observed.1

Tidal effects should theoretically make noticeable changes in planet-moon systems over very long timescales. For instance, the fact that our moon experiences ‘synchronous rotation,’ with one side always facing the Earth, can be seen as a problem for recent creation, if one assumes that the moon did not start out in such a state.6 However, in this case, tidal interactions among Saturn and its moons are causing problems for the old-universe view!

If the 4.6-billion-year-long secular history for the solar system is fictitious, as creationists argue, then one would expect, as our knowledge of the solar system increases, more and more internal contradictions in the secular story to come to light. This is especially true for dynamic, moving systems,7 like Saturn and its more than fifty moons. Astronomer Matija Ćuk, who favors relatively young ages for Saturn’s moons, made an excellent point when he said, “Every time you add motion to the system, it makes old moons harder to have.”1 That Saturn’s moving moons present difficulties for the secular “billions of years” story should not surprise anyone, since the Lord Jesus actually made Saturn and its moons just a few thousand years ago.

*Dr. Hebert is Research Scientist at the Institute for Creation Research and earned his Ph.D. in physics from the University of Texas at Dallas.
More Back to Genesis
The Latest
NEWS   ACTS & FACTS   PODCASTS