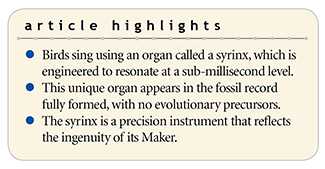 The rippling murmur of a mountain brook, the intertwining notes of a Chopin nocturne, and the melodious sounds of most birds are a tonic to soothe the soul.

What makes the unique sounds of birds is a structure called the syrinx, found at a point where the trachea, or windpipe, splits into the bronchi, the passageways to the lungs. The syrinx is typically designed with a resonating chamber and elastic vibrating connective tissues called tympaniform membranes. Sound is produced when the membranes are pushed inward via muscular contraction and partially block the bronchi.

It’s been known for centuries that some songbirds can make more than one sound at a time, but how? Through painstaking research (such as endoscopic techniques and high-resolution 3-D images), ornithologists were able to determine some birds have the ability to control the lateral and medial labia of the syrinx and produce an amazing effect called lateralization. “Each side of the syrinx receives its own motor program that, together with that sent to respiratory muscles, determines the acoustic properties of the ipsilaterally produced sound.”1

Did such sub-millisecond precision come about by time and chance or by plan and purpose? Indeed, “scientists aren’t sure how or why birds evolved these unique voiceboxes,”2 and “why only birds evolved a novel sound source at this location remains unknown, and hypotheses about its origin are largely untested.”3

Even with 21st-century technology, “the anatomy of the complex physical structures that generate [a bird’s] sound have been less well understood.”4 In addition, there appears to be no syrinx evolution. The first time a syrinx is found in the fossil record, it’s a 100% syrinx.5

Recent secular explanations for syrinx evolution are anemic. “The longer trachea of birds compared to other tetrapods made them likely predisposed for the evolution of a syrinx.”3 The phrase “likely predisposed” isn’t a scientific explanation. The same publication appeals to “strong selective pressures,” which again is hardly scientific.

Evolutionist Chad Eliason of Chicago’s Field Museum, committed to the strange idea that heavy-tailed theropod dinosaurs somehow became hummingbirds, stated, “If we found fossil evidence of a syrinx in dinosaurs, that would be a smoking gun, but we haven’t yet. In the meantime, we have to look at other animals for clues.”2

Researchers did look at other animals, but to no avail.

In a new study in the Proceedings of the Natural Academy of Science, an interdisciplinary team of developmental biologists, evolutionary morphologists, and physiologists examined the windpipes of birds, crocodiles, salamanders, mice, and cats to learn more about how syrinxes evolved. Their findings seem to confirm: the syrinx is an evolutionary odd duck.2

Why did God place the syrinx where He did in birds? A team of evolutionists explain why without giving Him the credit: “By sitting so low in the airway, the syrinx can produce sound with very high efficiency.”6

The syrinx is a uniquely designed and incredibly complex organ the first time it’s found in the fossil record. It has no evolutionary history. It’s designed to work at superfast speeds to produce some of the most beautiful music in God’s creation. Secular scientists might consider it an odd duck, but creationists know it is a marvelous manifestation of its Maker’s ingenuity.

* Mr. Sherwin is Research Associate at the Institute for Creation Research. He has a master’s in zoology from the University of Northern Colorado.