The message that permeates the Bible is that all humans are sinful by their nature and conscious action, and are under the judgment of a holy and righteous Creator-God, who has willing offered His own Son as the substitutionary sacrifice for humanity’s sentence of eternal death. That salvation transforms! The “new birth” is a “new creation.” Such a supernatural event must transform a life, if it is real. Both the Bible and history are replete with such evidence.

Every book of the Bible contains records of such transformations, as does every era of history. From the coliseum in Rome and the persecutions during the Middle Ages to the wonderful conversions of the addicts and outcasts of society, as well as the quiet and simple response of the child who seeks to return the love of Jesus, all testify to the transforming power of the Gospel.

Thanks for Everything
“Giving thanks always for all things unto God and the Father in the name of our Lord Jesus Christ.” (Ephesians 5:20) Being thankful for everything that happens in his or her life to a Christian...
BY: HENRY M. MORRIS, PH.D.

Liberty and the Word of God
“And I will walk at liberty: for I seek thy precepts” (Psalm 119:45). July 4th is called Independence Day here in our country because on that date 244 years ago our Declaration of Independence...
BY: HENRY M. MORRIS, PH.D.

Looking for Provision
Lawmakers are at it again as they vote on the latest stimulus bill. This potential “relief” might bring you some much-needed peace, or perhaps you think another bailout is far from what the...
BY: CORY EDWARDS

COVID-19 and International Missions
COVID-19 containment strategies are changing the dynamics of world missions. According to Christianity Today, many missionaries are stranded in temporary locations or unable to return to the missionary...
BY: STAFF WRITER 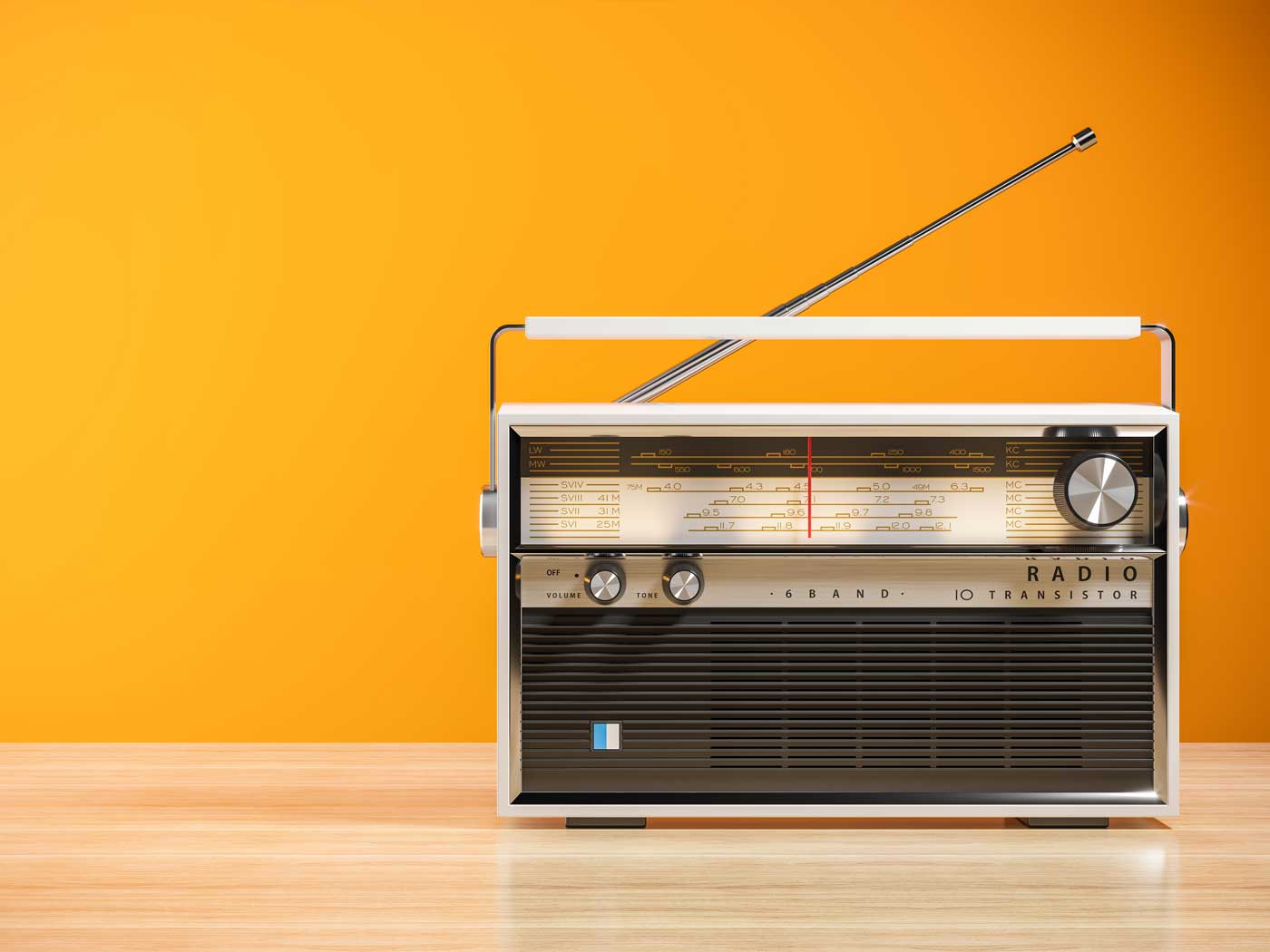 Providential Programming for Christian Radio Broadcasting
Sometimes providential programming includes a disastrous interruption with our plans which God directs toward His plan. Many Christian ministries, including ICR, are now challenged and stretched to...
BY: JAMES J. S. JOHNSON, J.D., TH.D.

Beating the Coronavirus Odds at Age 113!
The world has been reminded, once again, that God—not healthcare statistics nor global pandemics—determines when and where one’s earthly pilgrimage ends. BBC News, in Spain, reports the...
BY: JAMES J. S. JOHNSON, J.D., TH.D.

Prayers for America and Our Divine Editor
Today is America’s National Day of Prayer. How should we pray for America? Some might feel led to apply 2 Chronicles 7:14, where God says, “If My people who are called by My name will...
BY: JAMES J. S. JOHNSON, J.D., TH.D.

Why ‘Giving Tuesday Now’ Is Important to ICR’s Mission
We’re all walking through a revolutionary and uncertain time. For us here at ICR, the COVID-19 pandemic has caused swift changes to our daily operations and ability to serve our staff, volunteers,...
BY: MICHAEL HANSEN

A Truer Comfort
Stress levels have been rising for people all over the globe these last few weeks. News about the rapidly-spreading coronavirus, shelter-in-place orders, social restrictions, economic tailspins, and more...
BY: LAUREN PENNINGTON

Chaplains and COVID-19
With social distancing measures in place, it may be tempting to think that the work of Christian missions has ceased. After all, most people are limited to their own homes and essential activities. Yet,...
BY: STAFF WRITER 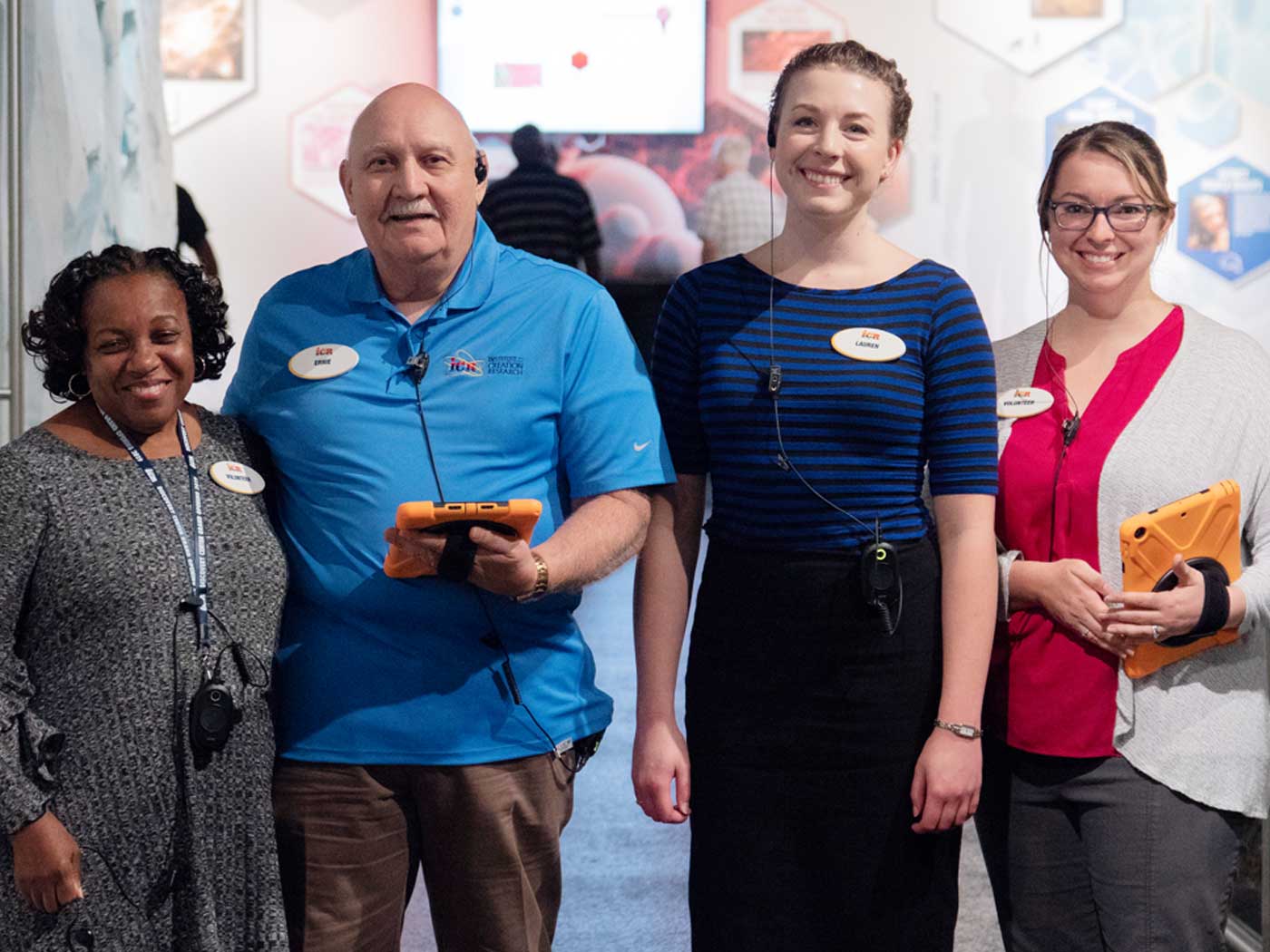 Today’s Choice: Worship or Whine?
Every day is a precious gift. We hear that statement so often. But do we really believe it? Each new morning we rise to a new day with God-given time to bless our Creator and be a blessing to His creation....
BY: PATTI MORSE 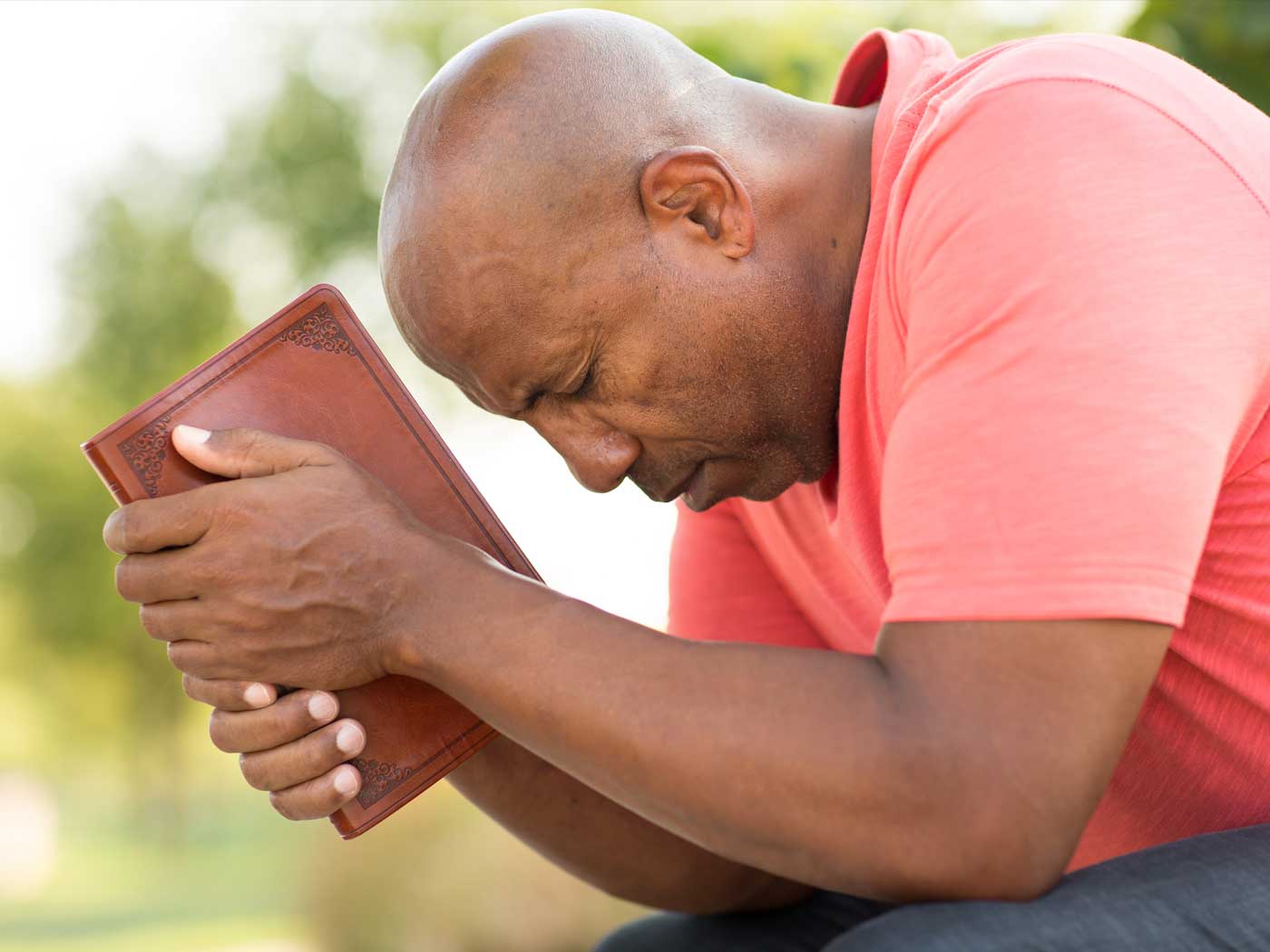 Take it to the Lord in Prayer
In a recent ICR Facebook post,1 friends shared how they structured their prayers, especially during the COVID-19 pandemic. Several offered various models (e.g., A.C.T.S., P.R.A.Y., The Lord’s...
BY: MICHAEL HANSEN

Childlike Trust: God’s Antidote for a Troubled Mind
Think back to your childhood summers. For me and my sisters, those days were filled with lazy mornings, sun-kissed noses after hours in the sunshine, pretending to be mermaids in the pool before toweling...
BY: LAUREN PENNINGTON

My Creation Journey
Dr. Hebert’s pursuit of creation research ministry started early in life. Learn about his early interest in science, middle school doubts about Christianity, and the book that changed the...
BY: JAKE HEBERT, PH.D.

Creation Conversion: From Atheist to Creationist
I have always loved science, partly due to the influence of my engineer father, who was heavily involved in research and development. While growing up, my free-time diet consisted of Mr. Wizard, Disney...
BY: JERRY BERGMAN, PH.D.

Creation Conversion: The Turning Point
God essentially gives us the ability to see the true nature of the world as His creation. He graces us with new perspectives and renewed thoughts.1 Seeing creation as God’s handiwork...
BY: STAFF WRITER

Conversion of a Rocket Man: Charles P. Morse
God providentially used several key events to draw my father, Charles Phillips Morse, to salvation and into the ministry as a creation pioneer in the late 1960s, when a six-day biblical creation was...
BY: CHARLES C. "CHAS" MORSE, M.C.ED.

Creation Conversion: The Turning Point
Last month in our second Creation Conversion article, Dr. Vernon Cupps described how he came to a young-earth view of creation after he took the time to investigate the actual scriptural, observational,...
BY: STAFF WRITER

Creation Conversion: The Turning Point
Last month we ran our first Creation Conversion article, in which ICR zoologist Frank Sherwin described his shift from adhering to a billions-of-years evolutionary model to believing in biblical...
BY: STAFF WRITER

Creation Conversion: The Turning Point
Many people believe that creationists are “brainwashed from birth” and adhere to a recent biblical creation simply because it has been drilled into their heads since they were toddlers—a...
BY: STAFF WRITER

Baptism in the Holy Spirit
"For by one Spirit are we all baptized into one body, whether we be Jews or Gentiles, whether we be bond or free; and have been all made to drink into one Spirit." (1 Corinthians 12:13) This...
BY: HENRY M. MORRIS, PH.D.

Confession and Forgiveness
"He that covereth his sins shall not prosper: but whoso confesseth and forsaketh them shall have mercy." (Proverbs 28:13) Every person, even the most godly Christian believer, at least occasionally...
BY: HENRY M. MORRIS, PH.D.

Christ Our Intercessor
"Who is he that condemneth? It is Christ that died, yea rather, that is risen again, who is even at the right hand of God, who also maketh intercession for us." (Romans 8:34) One of the most...
BY: HENRY M. MORRIS, PH.D.

Christians in Space
Many alive today have witnessed the entire history of space flight. Anyone who looked up to see Sputnik cross the sky on October 4, 1957, remembers the panic that set in across the country. The thought...
BY: DAVID F. COPPEDGE

Did Darwin Renounce Evolution on His Deathbed?
The story has circulated for decades. Charles Darwin, after a career of promoting evolution and naturalism, returned to the Christianity of his youth, renouncing on his deathbed the theory of evolution....
BY: JOHN D. MORRIS, PH.D.

Witnessing to Evolutionary Philosophers
"And when they heard of the resurrection of the dead, some mocked: and others said, We will hear thee again of this matter. . . . Howbeit certain men clave unto him, and believed: among the which...
BY: HENRY M. MORRIS, PH.D.

Intelligent Design and/or Scientific Creationism
Although we have published a number of articles dealing with the "Intelligent Design" movement, we at ICR continue to get numerous inquiries—both from Christians and from the secular...
BY: HENRY M. MORRIS, PH.D.
The Light of the World
One of the most amazing statements ever made was the assertion of Jesus Christ in the temple in Jerusalem one early morning long ago, speaking to a group of bigoted religionists who were seeking an excuse...
BY: HENRY M. MORRIS, PH.D.

Jesus And The Scientific Method
“. . . and tell John what things ye have seen and heard; how that the blind see, the lame walk, the lepers are cleansed, the deaf hear, the dead are raised, to the poor the gospel is preached”...
BY: PAUL G. HUMBER, M.S.
The Tree Of Life
The wonderful Tree of Life, discussed in the two "book ends" of the Bible, Genesis and Revelation, is one of the most fascinating (yet enigmatic) subjects in all the inspired word of God. It...
BY: HENRY M. MORRIS, PH.D.

Wise and Learned Men Who Believed in a Creator
What did the wise and learned men who founded the greatest republic in the world (the U.S.A.--the most free and prosperous for over 200 years), believe about the beginning of this universe? Were they...
BY: DOROTHY E. KREISS ROBBINS

Testimony of a Former Skeptic
Editor's Introduction Before his recent death, Dr. Walter Martin, author of Kingdom of the Cults and founder of the Christian Research Institute (CRI),* handpicked Hendrick...
BY: HENDRIK HANEGRAAFF

From Evolution to Creation: A Personal Testimony
Moderator: "Dr. Parker, I understand that when you started teaching college biology you were an enthusiastic evolutionist." Yes, indeed. The idea of evolution was very satisfying to me. It gave...
BY: GARY PARKER, ED.D.