Many people believe that creationists are “brainwashed from birth” and adhere to a recent biblical creation simply because it has been drilled into their heads since they were toddlers—a form of partisan indoctrination. But there are scientists who became creationists only after careful study and serious deliberation. They believed in a billions-of-years-old universe for many years before coming to a crossroads in their lives.

When these scientists reached a turning point—from belief in countless years of evolution to belief in a recent creation that took place just thousands of years ago—their lives completely changed course. This “creation conversion” couldn’t be more radical. It’s a complete revision in worldview that forever alters an individual’s understanding of the age and origin of the reality around him.

Numerous Christians who’ve diligently studied both Scripture and the scientific case for recent creation have experienced this convergence of life, education, and discovery as they journey toward God—this pivotal moment. Others are traveling down a similar road but still want more answers. Perhaps looking at the creation conversion of a scientist who has been on that same path can shed some light. Here is Frank Sherwin’s story:

ICR zoologist Frank Sherwin came to Christ as a young adult in the 1970s but refused to believe the early chapters of Genesis were historically accurate.

“This changed while I was in the Navy working onboard an aircraft carrier. In the jet-engine shop was the booklet Have You Been…Brainwashed? by Dr. Duane Gish.1 I was amazed that there were clear scientific evidences against Darwinism and in favor of the biblical account of creation. Living things—with all their intricate cellular detail—were created and did not come from red-hot, sterile stone as Darwinists teach. Thus began my interest in science and the Bible.

“Months later, I signed up for a community college class in environmental science while stationed in California. After that course, I knew God was leading me into science. My next night class was a human biology course. I became hooked on reading and studying biology from a creation science perspective. I pursued other classes with renewed vision—I now saw creation everywhere.

“After discharge from the Navy in December 1974, I attended college in Colorado and earned my degree in biology. Later, I was accepted as a zoology graduate student, studying under one of the foremost parasitologists in America. I collected helminths from tree swallows obtained in the Colorado mountains and named a new species of nematode (worm). The results were published in the peer-reviewed Journal of Parasitology. During this time, one of my graduate classes was titled ‘Evolution.’ However, after an entire semester, not a single fact of real, vertical evolution was presented. The course was more properly an advanced genetics class where the origin of any species was never discussed.

“Many examples of mutations in biology were given in our text and lectures but none proved beneficial for the organism. I learned that people are carrying a deleterious genetic burden, passing these mutations from one generation to the next. I saw that there were natural limits to biological change in animals—Darwin’s finches and fruit flies, bacteria, and plants—both in the laboratory and in the wild. I saw no documentation of upward, onward evolution but instead realized that every facet of nature confirmed creation.” 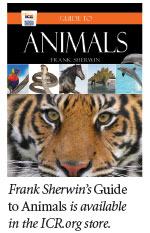 Brainwashed since birth? No. The radical transformation of a creation conversion births a fresh and new understanding of the universe, life, and mankind that simply can’t be explained away.

It is our prayer that God uses biblical creation ministries to open the world’s eyes to the truth of the Bible and the reality of creation. We want all generations to have a “creation conversion.” Look for more accounts of scientists whose lives were changed in future issues of Acts & Facts.