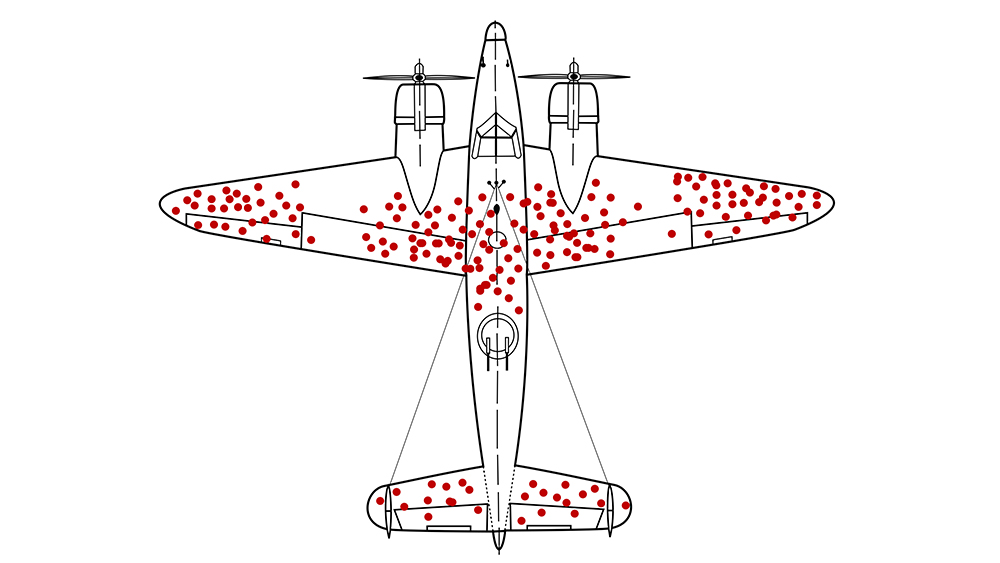 During World War II, fighter planes often returned from battle riddled with bullet holes. The Allies analyzed the litany of data and mapped the areas that were most commonly struck by enemy fire. In an effort to bolster resiliency for flying combat missions, engineers sought to reinforce the most commonly damaged areas of the planes to reduce the number that were shot down.

Dr. Abraham Wald (1902–1950)—a mathematician whose work contributed to the disciplines of decision theory, geometry, and econometrics, as well as to the foundation of the field of statistical sequential analysis1—noted that an alternate perspective could perhaps make more sense of the data. Contrary to prior opinion, he recognized that the reason certain areas of the planes weren’t damaged was that the planes that were damaged in those areas didn’t return. This insight led to the armor being reinforced on the areas of the plane with no bullet holes.2

Unfortunately, in modern times, whether intentionally or innocently done, it’s become increasingly common for biblical data to become skewed; the associated meaning then doesn’t match what God intended. God emphasizes the proper interpretation of His Word, and this includes placing every word in its correct context. Accordingly, several Bible passages warn against distorting the gospel (Galatians 1:8-9); going beyond what is written (2 John 1:9); twisting the Scriptures (2 Peter 3:16); and adding or subtracting from the Word of God (Revelation 22:18-19).

Despite these warnings, some derive meaning out of context that’s misrepresented or not even present, thus preventing proper application. The dangers of taking the Bible’s statements out of context are that we 1) most obviously end up with the wrong message; 2) oftentimes remove “we” and insert “me,” making verses about ourselves when the Bible was written for us but not to us; and 3) miss the original meaning, thus reading the Bible for what we can get out of it and not what God wants for us.

In the Bible, we have “the prophetic word confirmed, which you do well to heed as a light that shines in a dark place, until the day dawns and the morning star rises in your hearts; knowing this first, that no prophecy of Scripture is of any private interpretation” (2 Peter 1:19-20). We cannot have a “confirmed” meaning of Scripture unless it’s interpreted correctly. Proper, contextualized interpretation of the Bible is of the utmost importance to prevent the misuse and misapplication of its truths.

Interpretation in context seeks to allow the Bible to speak for itself within its original setting before drawing conclusions about how it applies to our modern setting.3 In tandem with the aid of the Holy Spirit—who will guide Christians toward a thorough biblical interpretation (John 14:26)—these tenets point Christians toward the truth of Scripture and dissuades them from misunderstanding and misapplication.4

Furthering this point, the Lord Jesus didn’t say, “The truths will make you free.” He said, “The truth will make you free” (John 8:32). Like Dr. Wald’s within-context analysis of fighter aircraft damage data and its proper application toward aircraft survivability, an accurate, within-context biblical interpretation ensures that truth is conveyed correctly and, therefore, that proper application can be made. When this is done, concepts such as ex nihilo creation make sense and can be applied to the larger context of the Bible’s message.

This larger context is conveyed in 2 Corinthians 4:6: “For it is the God who commanded light to shine out of darkness, who has shone in our hearts to give the light of the knowledge of the glory of God in the face of Jesus Christ.” Thus, God’s creative power and His redemptive power are inseparable. The God who creates is also the God who redeems, and He does both with the same power.


*Dr. Corrado earned a Ph.D. in Systems Engineering from Colorado State University and a Th.M. from Liberty University. He is a freelance contributor to ICR’s Creation Science Update, works in the nuclear industry, and is a senior officer in the U.S. Naval Reserve.