Does Ganymede Look Young? | The Institute for Creation Research
Skip to main content 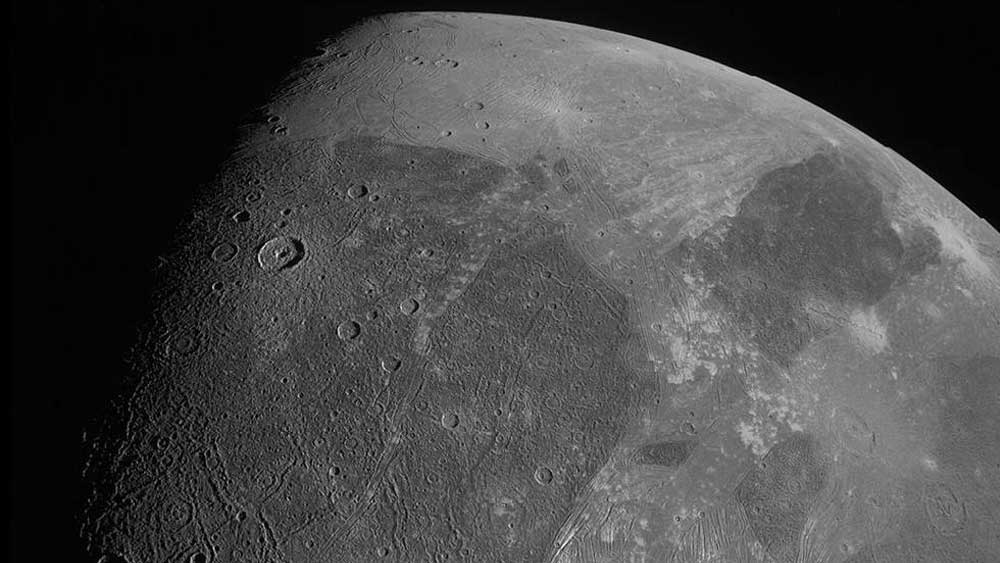 NEWS     CREATION SCIENCE UPDATE     THE SOLAR SYSTEM MUST HAVE BEEN CREATED
Does Ganymede Look Young?
BY BRIAN THOMAS, PH.D. *  |
MONDAY, AUGUST 23, 2021
On June 7, 2021, NASA’s Juno spacecraft flew closer to Jupiter’s moon Ganymede than any spacecraft had ever before. Ganymede is the largest moon in the Solar System—a body larger than the planet Mercury. Its frozen surface holds interest as a distant water source. Analysts still ponder three unique features of Ganymede, one of which they’re now seeing for the first time. If reactions to youthful features on other bodies out there offer any lesson, then long-age believers will end up once again wrestling with why this moon also looks young.

Juno’s newly released image records only the green part of the spectrum, which NASA rendered in grayscale. Red and blue are on the way and, after processing, should result in a full-color image of Ganymede’s surface. But this green channel is enough to reveal what look like fissures.

A NASA web post that accompanied Juno’s new image noted “long structural features possibly linked to tectonic faults.”1 And faults imply geologic activity, which of course requires energy. If these faults turn out to look like recently formed features, will uniformitarian thinkers craft tales to keep this moon’s geology energized over billions of years? That’s what happened with Earth’s Moon2 and with Pluto.3 If over 4 billion years old, then shouldn’t these bodies all be geologically dead many times over?

NASA scientists have also trained the Hubble telescope onto Ganymede. A newer analysis of 1998 observations revealed water vapor in its atmosphere. Their 2021 report in the journal Nature Astronomy described a process where just enough sunlight hits the equator to vaporize surface ice.4 Lead author Lorenz Roth told NASA, “The water vapor that we measured now originates from ice sublimation caused by the thermal escape of water vapor from warm icy regions.”5 Can ice keep getting sublimated off the moon’s surface for billions of years? Other Solar System bodies are also losing water into space at rates that make them look young.6,7

And like so many unexpected discoveries of still-active magnetic fields in Solar System planets and moons, those 1998 spectra revealed electrified gas bands that “provided further evidence that Ganymede has a weak magnetic field.”3 But it shouldn’t have any magnetic field at all!

A 2015 summary noted Ganymede’s magnetic field strength as higher than Mercury’s and as “a bit of a mystery” because “it should have cooled sufficiently that fluid motions are no longer possible.”8 A century ago, uniformitarian scientists proposed a dynamo theory to explain how the magnetic fields of moons and planets could persist for billions of years.9 This theory requires such bodies to have molten cores. But such cores should have cooled and frozen eons ago, so that bodies like Mercury and Ganymede should no longer have magnetic fields. Yet they do!

Magnetism, sublimation, and possible tectonic faulting give Ganymede hallmarks of youth. These three features promise to pose a glitch for old-age thinking but fit recent creation without a hitch.


Dr. Brian Thomas is Research Scientist at the Institute for Creation Research and earned his Ph.D. in paleobiochemistry from the University of Liverpool.
The Latest
NEWS   ACTS & FACTS   PODCASTS