A team of scientists led by Erik Gulbranson recently discovered a forest of fossil trees in Antarctica.1 Gulbranson, a paleoecologist at the University of Wisconsin-Milwaukee, claims this is the “oldest polar forest on record from the southern polar region.”1 The trees were found in Antarctica’s Transantarctic Mountains and include a mix of evergreens, deciduous trees, and gingkoes.

This discovery should be no surprise to those who take Genesis as literal history. The Bible clearly describes a global Flood that affected all land masses—why should Antarctica be an exception?

This discovery should be no surprise to those who take Genesis as literal history.

Dinosaur and mosasaur (massive swimming reptiles) fossils occur on every continent including Antarctica.2 These discoveries demonstrate that a much warmer global climate existed in the pre-Flood world.2 Warm-weather plants like Glossopteris have been found in Permian rocks on Antarctica for decades and are often used to make plate tectonic reconstructions. 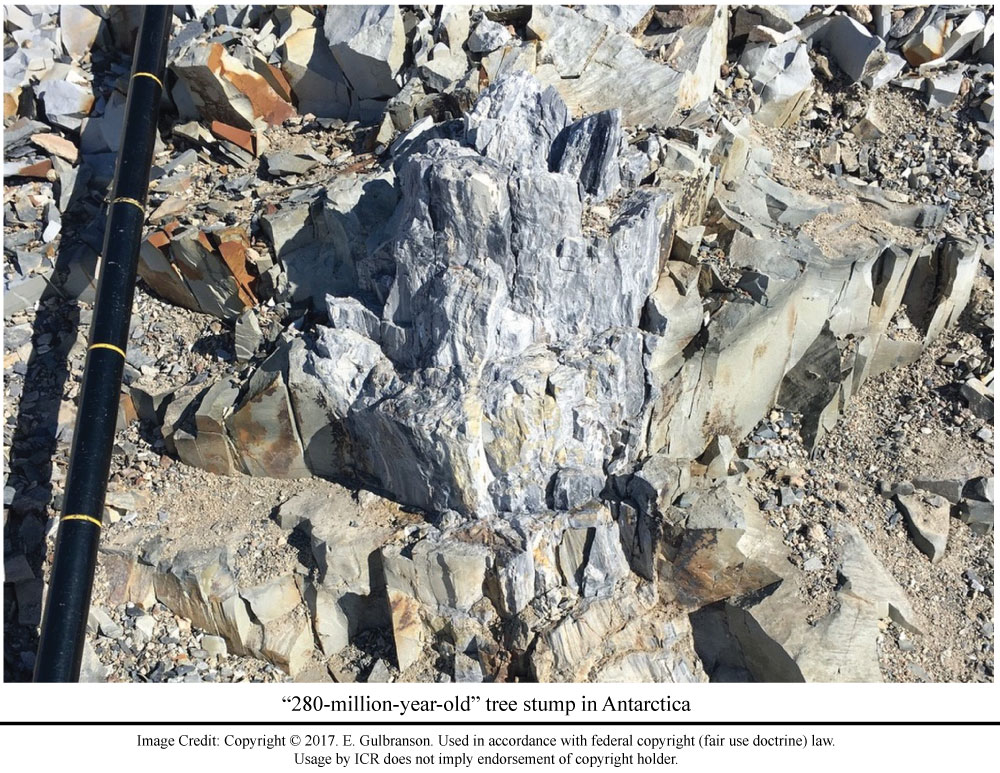 Secular science even admits Antarctica was not always cold in the past. LiveScience’s Stephanie Pappas wrote,

Antarctica wasn’t always a land of ice. Millions of years ago,3 when the continent was still part of a huge Southern Hemisphere landmass called Gondwana, trees flourished near the South Pole.1

Some creation authors have tried to explain the presence of temperate climate fossils like trees, dinosaurs, and coal beds in Antarctica by making claims that Earth somehow “rolled” on its axis during the Flood, resulting in the North Pole shifting from central Asia to its present position, but this explanation appears to cause more problems than it solves.4

First, temperate and tropical-type flora and fauna fossils, like dinosaurs, are found buried in Flood rocks even in central China—which would have been the north pole if the earth rolled on its axis—and everywhere else on Earth. Thus, the entire globe was warmer in the pre-Flood world. Second, the extreme forces required to explain such a radical shift in the Earth’s axis have never been adequately resolved—it remains a speculation.

Gulbranson and his team think the fossil trees they found are about 280 million years old,3 which places them in Permian System strata.1 The discovering scientists found the trees were so rapidly buried in volcanic ash that they contained fossilized plant cells that are virtually mummified, “preserved down to the cellular level.”1 They reported,

The plants are so well-preserved in rock that some of the amino acid building blocks that made up the trees’ proteins can still be extracted, said Gulbranson, who specializes in geochemistry techniques.1

How could proteins and original amino acids survive for millions of years? The secular science community has no viable answers to explain remarkable finds like these.5

Scientists found the trees were so rapidly buried in volcanic ash that they contained fossilized plant cells that are virtually mummified, “preserved down to the cellular level.”

So, the fossil trees themselves tell a different and a far more recent story—one that fits the biblical account of a global Flood just thousands of years ago. These trees were buried rapidly1 during the global Flood described in Genesis. Temperate and tropical plants and animals were caught up and quickly buried in the ash, mud, and sand that engulfed them in this cataclysmic event. These fossils remind us that God’s Word is true.

*Timothy Clarey is Research Assocaite at the Institute for Creation Research and earned his Ph.D. in geology from Western Michigan University.