When you think of getting your blood pressure taken, you no doubt think of the tight pressure on your arm and the loud ripping noise of the Velcro cuff. Indeed, we've all experienced the benefits of that amazing fabric, Velcro (brand name since 1959). The name comes from the French word velours meaning loop ("vel") and the French word for crochet meaning hook ("cro"). Many wonder just how man was able to progress through the centuries without it. As well as the blood pressure cuff, the more common application of this artificial fabric is in tennis shoes and cloth wallets.

The story of Velcro's discovery is straightforward but is nonetheless a testimony to how God designed His creation—and what we can learn from it. In 1941, Swiss engineer and mountaineer George de Mestral returned from an afternoon of hunting. He found it difficult to remove cockleburs and thistles from both his clothing and his dog and decided to investigate why this was so. Under the microscope Mestral discovered hundreds of exquisitely designed hooks on these seeds. Upon examination of his pants he found the fabric formed loops perfect for catching the pesky cockleburs. He had his answer, and an idea. 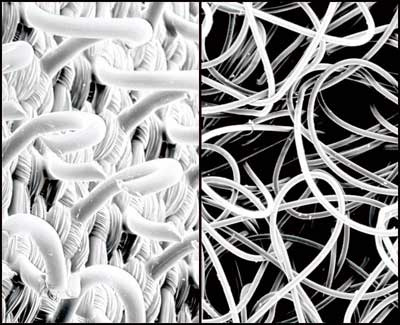 In 1948, Mestral began work on a special locking tape with the help of a local weaver. He discovered that nylon hooks formed under ultraviolet light would latch into tiny nylon loops. With more work Mestral finally sold the rights to his invention and became a millionaire.

There are many examples of how man has looked to the creation for technological inspiration. This has spawned an emerging science called biomimicry—the idea that nature has perfected millions of manufacturing and design processes that man can imitate.

And imitate he has, from the construction of solar cells based on leaf design to Velcro. In an ironic and sad twist, secular engineers, architects, and designers produce detailed products and inventions they freely admit they copied from nature (biomimicry), yet they insist both these objects and intelligent copiers are the result of millions of years of time, chance, and random mutations requiring no higher Architect!

Natural man gives credit only to the creation ("3.5 billion years of evolution"), rather than the Creator (Romans 1:20).

*Frank Sherwin is a zoologist and seminar speaker for ICR.