Already in 2017, secular scientists have described some stunning original biochemicals in fossil bones. Two new finds reignite vigorous debate over the nature of the protein remnants—are they true organic remains, some form of contamination, the result of a strange preservation process, or what? As in the past, researchers totally leapfrog a neat, tidy, Bible-friendly conclusion. 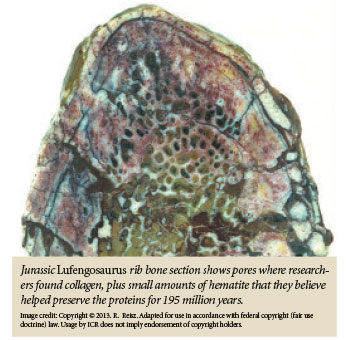 One find reported in Nature Communications included signatures of Type I collagen in a Lufengosaurus sauropod fossil supposedly 190-197 million years old.1 Researchers applied new technology to pinpoint precise locations of protein signature within the still-porous rib fragment. They also found hematite near the protein. In an interview with senior author Robert Reisz, the University of Toronto News said, “Reisz and his colleagues believe that these hematite particles were derived from the original blood of the dinosaur, and that they acted as the catalyst for preserving the protein in the vascular canals of the bone.”2 However, Reisz noted no hematite particles in his 2013 report of protein in a Lufengosaur with essentially the same age assignment.3

Another find recently published in the Journal of Proteome Research verified and extended protein identification in a duck-bill dinosaur that Mary Schweitzer’s team had described in 2009.4 Her group’s excellent earlier paper identified the sequence of amino acids in dinosaur collagen.5 Her new team’s 2017 report included even more dinosaur protein sequence.

These two new finds join dozens of others published over the last half-century,6 but evolutionary scientists still have a hard time accepting that these fossils retain original biochemicals. Robert Service wrote in Science:

The [soft tissue fossil] claims were met with howls of skepticism from biochemists and paleontologists who saw no way that fragile organic molecules could survive for tens of millions of years, and wondered whether her samples were contaminated with modern proteins.7

So, the argument centers on time. How could organic material last for so long? What about hematite particles preserving the proteins? Ancient protein specialist Michael Collins noted, “Proteins decay in an orderly fashion. We can slow it down, but not by a lot.” He also “doesn’t think the [hematite] process could arrest protein degradation for tens of millions of years.”7

Since nobody has figured out how modern collagen could stuff itself into the deep recesses of dinosaur bone, claims of contamination ring hollow. And the standard age-determining logic is circular: Since these dinosaurs come from millions-of-years-old rock layers, and since protein does not last even a million years (assuming the best preservation conditions), then these dinosaur proteins must not be possible. Such a conclusion ignores the fossil data. It uncritically assumes an old earth right up front. Short-lived fossil proteins, tightly folded rock strata,8 contradictory radioisotope “ages,”9 and flat strata boundaries independently refute millions of years.10

The protein discoveries come from fossil science, and the protein decay rates come from experimental science, but where do we get the millions of years? If that merely comes from evolutionary speculation, then the tension dissolves. From a biblical perspective, the Flood deposited most fossil-bearing rock layers recently, one right after the other, in a single year. This opens the possibility of discovering original biochemicals in all the Flood rocks. No wonder scientists keep discovering original proteins in deeply buried fossils.