Recently, the Institute for Creation Research acquired some property in Alaska that will enable its scientists to study the unique mechanisms in plants that allow them to live in extreme climates. The selection of available tree species (white spruce, alder, cottonwood, birch, and willow) provides a variety of unique cold tolerance systems in plants for studies in "extreme" intelligent design. Because extreme cold can be detrimental to living organisms, divine programming is required to equip plant life to survive (and even thrive) in Alaskan winters.

While much is known about the cold acclimation and tolerance process in plants, a majority of studies performed in this research field have only been done with plants adapted to moderate climates, such as the model species thale cress (Arabidopsis thaliana), a small weedy plant in the mustard family. These basic studies have provided an excellent cache of genetic and physiological data that forms a foundation to build upon and to refer back to.

However, there are other mechanisms in plants for cold tolerance that are not represented in the thale cress species, particularly those found in the various species that live in very extreme cold temperatures, like those found on ICR's new Alaska property. This particular tract of land is located in the "Southcentral Alaska" region (not far from Anchorage) and within range of what is called a subarctic or boreal climate. This area is ideal for the study of cold-tolerant plant species because it is generally characterized by long (nine months), cold winters where temperatures often drop down to -40°F. The summers are short and mild, and temperatures can climb above 80°F, but also on occasion drop to below freezing at night.1 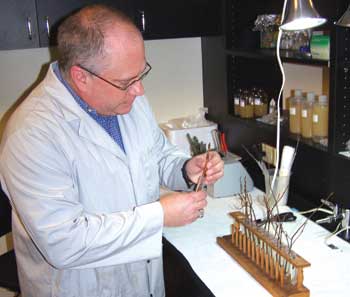 In order for plants to survive the cold winter temperatures, they first go through what is called an acclimation process.2 It is this acclimation period in which most of the activity in the cell occurs in relation to increasing the plant's cold tolerance. Acclimation is initiated by gradually cooling temperatures in autumn as winter approaches.

Modern genomics-based research technologies now allow scientists to study thousands of genes and their activity in a single experiment, usually in response to some environmental cue, such as cold temperatures. Such studies have shown that the overall response to cold stress in plants involves the activity of hundreds of genes that contain sub-groupings. These sub-groupings are turned off and on in modules or blocks at different times during the exposure to cold, which is perceived by the plant as a temperature-based stress. In addition, smaller subsets of genes are also turned off or down-regulated in response to cold stress. When all of these genes are classified as to the function of the proteins that they code for, a very interesting, highly engineered, and elaborate picture develops.

Survival of the Fitted: Prepackaged Antifreeze for Plants

The functional groupings of the genes that were turned on "fit" well with observed and known cellular responses that are advantageous to the plants' survival in extremely cold weather. For example, a lot of changes occur in the spaces between cells, such as an increase in fluids pumped out of the cells. This combines with an increase in proteins and molecules that not only provide antifreeze properties, but also cause ice crystals to form in the spaces between cells rather than inside the cells. If ice crystals formed within the cells, they would cause the cells to rupture as the ice crystals grew and expanded--thus killing the plant.

In addition, a wide variety of stress-related proteins begin to accumulate inside the cells in response to cold temperatures. These stress response proteins help stabilize the cell, with some types attaching to DNA, others to various cell proteins, and others helping to maintain and protect the cell membrane, which is made out of lipids. Other types of proteins that are produced represent the enzymes that form various biochemical pathways that ultimately produce the different antifreeze compounds (primarily sugars) which help to keep the liquid in the plant from freezing. These antifreeze compounds work in the same way that antifreeze works in a car engine. (When humans invent and install an antifreeze system for cars, they are admired for their genius. So why are humans slow to admire God's much more complicated invention and installation of antifreeze systems in plants?)

One thing that is quite interesting is the efficiency observed in the acclimation process, with many of the proteins produced by the same genes that are turned on during drought stress or low water conditions. This is because cold-acclimated cells have a reduced water content, since much of their cellular liquid is pumped out of the cell into the spaces between cells. While this helps protect the cells from forming ice crystals, the reduced water content puts the same stress on a cell as drought conditions do. Of course, a drought-stressed cell also has a reduced water content because of a lack of available soil moisture. Thus, many of the same stress-related genes are utilized in both cell processes.

Not only are diverse categories of proteins produced during the acclimation process, but the different groupings of proteins are also made in a time-responsive fashion. The first group that is produced is called the quick-response or transient class of proteins. These genes are turned on immediately in response to cold temperatures and make proteins that apply first aid to the cell just like a paramedic team on an ambulance would do in case of an accident or health emergency.

These genes are not only turned on in a first-response wave to the slightest sign of cold-temperature stress, but they also stay active as long as the stress is present. If the cold-temperature stress persists over several days, then other groups of genes are turned on to make long-term cellular changes and preparations for extended cold tolerance over the winter months. Continuing the accident/emergency analogy, these genes would represent the types of things that would happen after a patient got to the hospital, where he would see a crew of doctors, perhaps have some type of corrective surgery, and be surrounded and treated with equipment and resources to ensure good health over the long term.

The little research that has been done on plants in subarctic regions (such as the larch tree, which belongs to the family of trees that include aspen, birch, and poplar) has revealed some exciting initial results.4 These plants not only have the basic responses mentioned above, but they also have extra features that enable them to cope with extreme temperatures as low as -60°F. Stop for a second and consider this extreme range of temperature adaptation--from 70 to 80°F in the summer to 0 to -40°F in the winter with no available external protection.

When You Can't Dress for Success

Of course, humans can put on extra clothing and cold-weather gear in response to a cold environment, but a plant doesn't have that option. These highly cold-tolerant plant systems exhibit extreme engineering and involve a complex cascade of hundreds of genes that have to work together within specific regulatory blocks and timeframes. As with all of the other physiological processes observed in biology, the supposed development of such a dynamic and complex system through the random processes of evolution--especially under such severe temperature extremes and fluctuations--is completely impossible.5