Trees: An Engineering Wonder | The Institute for Creation Research
Skip to main content

There are few things more beautiful and soothing than walking through a forest or grove of trees.1 Scripture has much to say about these majestic woody perennials, from the “fruit tree that yields fruit according to its kind” (Genesis 1:11) to “the tree of life” that will be freely accessible to all believers (Revelation 22:2). A number of tree varieties are cited in the Bible, including cedar, oak, olive, and fig. Creationists maintain that trees have always been trees in all of their majestic beauty and design.

Evolutionists reject the biblical account of origins and must posit a strictly naturalistic origin of everything, from people to plants. Botanists estimate there are at least 60,000 identified tree species in the world, but what was their origin? In tracing the evolution of forest trees, evolutionist Elizabeth Stacy of the University of Hawaii Hilo says, “We know next to nothing about how they got here.”2

Secular scientists believe man’s unknown primal ancestors came down from the trees sometime in the distant past. However, “this story starts with a bang, if for no better reason than there are no fossils that document humankind’s initial and presumably painful descent from the trees.”3

Concerning the pre-Flood world of about 4,500–6,000 years ago, we have clear fossil evidence that dinosaurs wandered among some very familiar trees, including oak, willow, and magnolia. In fact, one evolutionary report says:

If you were to travel back in time 100 million years to look for your Christmas tree, you would find firs nearly identical to the ones sold today. New research shows that the genome of conifers—a division that includes spruces, pines and firs—has hardly changed since the days of the dinosaurs.4 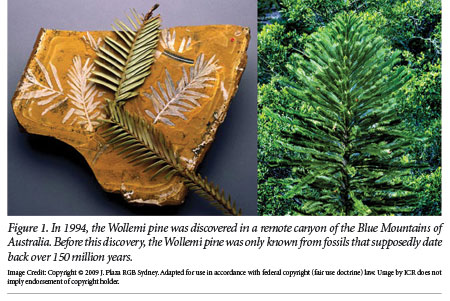 Non-evolutionists agree, conifers have always been conifers. This is also true for a “dinosaur age” tree called the Wollemi pine (Figure 1) discovered alive and well in Australia in 1994.5 This tree displayed no evolution for 200 million years, according to evolutionists.

The design of trees is a clear indication of their having been created (Romans 1:20). Who hasn’t enjoyed throwing winged seeds (samaras) into the air and watching them twirl in their one-winged flight (Figure 2)? Sadly, evolutionists say any apparent design originated not from the Creator but in this case somehow from the tree itself.

The whirling, winged seeds of today’s conifers are an engineering wonder and, as UC Berkeley, scientists show, a result of about 270 million years of evolution by trees experimenting with the best way to disperse their seeds.6 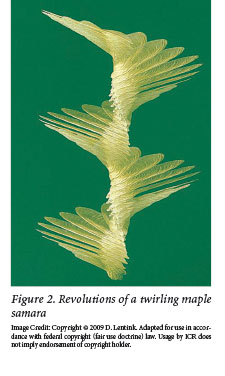 Trees experimenting—do trees possess intelligence and volition? That is not a logical or a scientific explanation. Doesn’t an “engineering wonder” require a brilliant engineer?

Not only are the varieties of seed dispersal evidence of design, but the construction of basic tree structure that enables them to reach hundreds of feet into the air reflects God’s creative hand. Trees are without an internal or external skeleton to provide their rigidity and support. However, each plant cell has a robust cell wall composed of cellulose (the most abundant biomolecule on Earth) that we appreciate every time we bite into a celery stalk. Together, these trillions of cell walls make up the wood (secondary xylem) of the tree. Where did wood come from? Evidently evolutionists don’t know, as one study stated, “The first steps of wood evolution are unknown.”7

Enzymes are proteins that are intimately involved in virtually all biochemical reactions. Researchers discovered an amazing molecule called cellulose synthase (CESA) bound to the plant cell plasma membrane. It’s a complex enzyme—or more properly, a ring-shaped molecular machine that aids in putting together stacks of tiny units called microfibrils (sheaths of glycoprotein complexes) by literally braiding them!8 By removing sugar molecules as it climbs microtubules (tiny hollow protein tubes), CESA contributes at the molecular level to the sturdy structure of wood. To say this enzyme is intricate is an understatement. Four decades of experimental effort have gone into trying to put together the 3-dimensional atomistic model of this enzyme’s 506 amino acids without success.9

Most of us remember being taught the amazing process of photosynthesis that takes light energy and makes life energy for people and animals. In the 21st century, what do we know about this amazing biochemical process of oxygen production by trees and other plants? As one recent report admitted, “We know little about the mechanics of how plants create oxygen during photosynthesis.”10 If the brightest scientific minds today know so little regarding this critical segment of photosynthesis, how can evolutionists be so sure it arose spontaneously many millions of years ago? 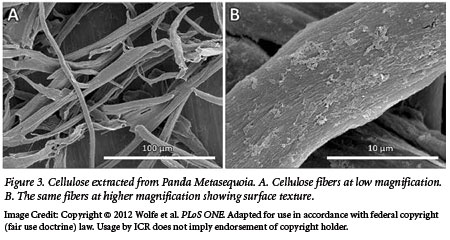 In recent years, scientists have found unfossilized wood deep in sedimentary layers that defy evolution’s long ages (Figure 3). Although a kimberlite crater in Canada is said to be “53 million years old,” it yielded exquisitely preserved unfossilized wood. The study reporting it stated, “The wood yields genuine cellulose” and “wood from the Panda kimberlite has pristine preservation.”11 Like soft dinosaur tissue,12 this discovery is hardly surprising considering their common catastrophic burial just thousands of years ago.

Some evolutionists will look to the science of dendrochronology—dating by tree rings—to cast  doubt on traditional biblical ages. Up in the mountains of Nevada and California grows the hearty and strange bristlecone pine tree (Pinus longaeva). Said to be the oldest living thing on Earth, some specimens in the White Mountains in California are estimated to be about 5,000 years old. Scientists expand this tree-ring chronology further back by cross-dating core samples, one to another, to give a supposed “master chronology” of over 8,000 years. How reliable is this tree-ring dating? In 2009, creation scientist John Woodmorappe wrote an article addressing this issue and stated, “The Bristlecone Pine long chronology, comprised of hundreds of live and dead trees, is claimed to be over 8,000 years long. But is there more to the story?” He goes on to say, “Much more must be learned about this phenomenon before this hypothesis can be developed further.”13

Trees producing fruit, and the wood of which they are composed, are a testament to God’s creation: “Out of the ground the Lord God made every tree grow that is pleasant to the sight and good for food” (Genesis 2:9).