What if meteorologists only got paid if their weather predictions proved to be correct? If so, predicting the weather would be a risky business, like gambling at a casino table. In ancient Israel, however, the stakes of making incorrect prophetic predictions were higher than forecasting weather.

“‘But the prophet who presumes to speak a word in My name, which I have not commanded him to speak, or who speaks in the name of other gods, that prophet shall die.’ And if you say in your heart, ‘How shall we know the word which the LORD has not spoken?’—when a prophet speaks in the name of the LORD, if the thing does not happen or come to pass, that is the thing which the LORD has not spoken; the prophet has spoken it presumptuously; you shall not be afraid of him.” (Deuteronomy 18:20-22)

A prophet whose prediction failed could be executed. Thankfully, modern-day meteorologists aren’t stoned for incorrect forecasts. Likewise, neither are modern-day alarmist climatologists who predicted a manmade global warming crisis punished for being wrong.

However, if you’re an expert, being disproven is embarrassing. This is exhibited by changing “climate change” signage in Glacier National Park, Montana, near the triple watershed divide of North America, a unique area that drains precipitated waters toward the Pacific, Atlantic, and Arctic Oceans.

During September 2017, not that long ago, the National Park Service featured a sign inside Glacier National Park lamenting the results of global warming. 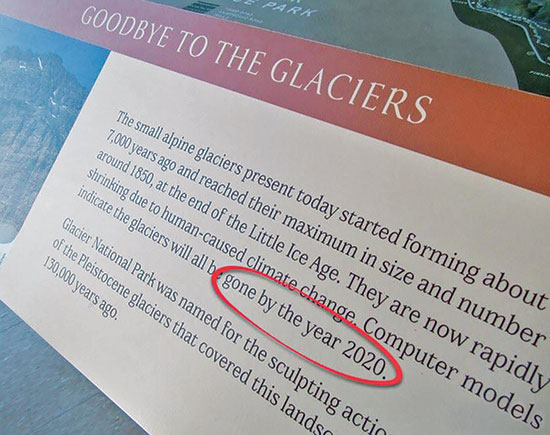 The small alpine glaciers present today started forming about 7,000 years ago and reached their maximum in size and number around 1850, at the end of the Little Ice Age. They are now rapidly shrinking due to human-caused climate change. Computer models indicate the glaciers will all be gone by the year 2020. [emphasis added]

But there is a reality problem with that dire prediction: 2020 is now here, yet Glacier National Park still has magnificent glaciers. Some are shrinking, while others are growing.

Realizing their prediction would be disproven, the National Park Service quietly changed the sign.1 By summer 2019, the revised sign dialed back that glacier-meltdown alarmism, yet the Park Service never admitted the previous prediction was wrong.

The small alpine glaciers present today started forming about 7,000 years ago and reached their maximum size and number around 1850, at the end of the Little Ice Age. Currently, they are rapidly shrinking due to human-accelerated climate change. When they will completely disappear, however, depends on how and when we act.” [emphasis added]

Meanwhile, evolutionists teach uniformitarian geology nonstop, an ongoing fulfillment of Peter’s prophecy of Bible-ignoring scoffers who pretend Earth’s geologic history has been uniform from its beginning (2 Peter 3:3-6). Worldwide geological and paleontological proofs that show God once judged Earth with a global flood remain unrefuted. That Flood was unique, and God promised there will never be another one like it.

“Thus I establish My covenant with you: Never again shall all flesh be cut off by the waters of the flood; never again shall there be a flood to destroy the earth.” (Genesis 9:11)

So, unlike the changing signage in Glacier National Park, God’s prophetic promises in His unchanging Word need no changing. The Flood once covered the entire globe, but it will not be repeated. Thankfully, God governs all climate and weather cycles with reliable regularity, permitting vacillating variety within predictable limits.2