In last month’s edition of Acts & Facts, I mentioned studies that Dr. Steve Austin and I presented in a technical paper demonstrating that the deformations in sedimentary strata at two sites better fit with the biblical Flood than with evolution’s long ages of deposition.1 We featured the first project site, the Split Mountain Formation in southern California, in that issue. Now we will examine geological evidence from the second site, the Ute Pass Fault in Colorado.

The Rocky Mountains of Colorado were formed by “large reverse” faults, with some having over 20,000 feet of vertical slip. A reverse fault generally places older rocks on top of or adjacent to younger rocks. The very abrupt Front Range is caused by the Ute Pass Fault, a prominent north-trending reverse fault more than 40 miles in length.2 On the western side of the fault are the upthrown Pikes Peak granite and associated Precambrian metamorphic rocks (pre-Flood rocks), showing all sedimentary strata (Flood rocks) removed by erosion. On the eastern side of the Ute Pass Fault are flat-lying strata thousands of feet thick that are typical of the plains in eastern Colorado.

A generalized cross-section of the Ute Pass Fault is shown in Figure 1. According to a 1965 field study conducted by Geologist J. C. Harms, the Ute Pass Fault dips steeply westward near the surface then becomes nearly vertical with increasing depth.3 About 12,000 feet of Phanerozoic strata (Flood rocks) underlie Colorado Springs, with Precambrian basement rocks (pre-Flood) occurring at an elevation of about 6,000 feet below sea level. Because the adjacent Precambrian basement rocks on the western side of the Ute Pass Fault occur up to 14,000 feet above sea level (i.e., Pike’s Peak), over 20,000 feet of vertical displacement occurred southwest of Colorado Springs!

Stratigraphy and Age of Faulting 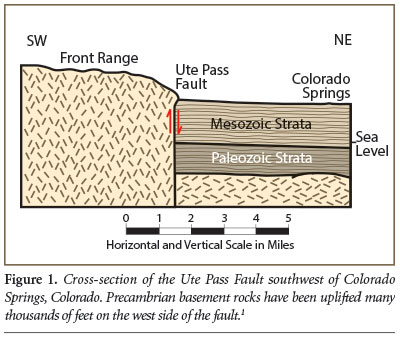 The lowermost strata in the Colorado Springs area are in the Sawatch Sandstone (dated as Cambrian, or earliest Flood), which directly overlies the Precambrian basement. Also of importance in relation to the Ute Pass Fault is the thick, arkosic (composed of weathered granite and sand) Fountain Formation (dated as Pennsylvanian and Permian, or mid-Flood) overlying the Sawatch Sandstone.

One of the most interesting characteristics of the Ute Pass Fault is the intensity of folding in the strata on the eastern side of the fault. As the strata approach the flank of the Front Range, 12,000 feet of once-horizontal strata are dramatically flexed into a nearly vertical orientation, as is visible in the Garden of the Gods. The strata bent excessively yet did not break! It appears that at the time of uplift the sedimentary deposits adjacent to the Ute Pass Fault were not yet solidified—they were still soft.

Evidence of soft-sediment deformation can also be seen in tight-drag folds very close to the Ute Pass Fault. Figure 2 shows how the red, arkosic sandstone of the Fountain Formation is strongly folded in contact with the fault near Manitou Springs, Colorado. This folding was caused by drag of the strata against the upthrown western side of the fault, consistent with the notion that the strata were ductile (soft) and not solidly cemented when deformed. The problem is that the strata involved are assigned an age of 300 million years while the folding event, the Laramide Orogeny, is regarded as taking place less than 70 million years ago. How could the material remain moldable for 230 million years? 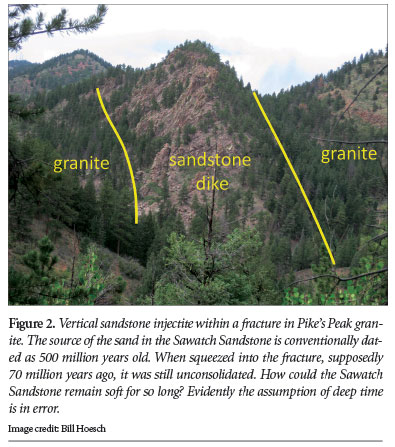 Among the most remarkable soft-sediment deformation features along the Ute Pass Fault are the sand injectites or clastic dikes of quartz sandstone associated with this fault and many other reverse faults of the Front Range.2,3,4 Over 200 of these sandstone injectites were mapped by Harms. The injectites vary in length up to several miles, in width from a fraction of an inch to 300 feet, and penetrate downward 1,000 feet or more through the bedrock, which is almost always the Precambrian basement (Pikes Peak granite or associated metamorphic rocks). Harms interprets the sandstone injectites to have been inserted from sandstone overlying the Precambrian basement along extension fractures in the upthrown block of the convex-upward reverse fault. Virtually all the injectites mapped have strikes parallel to the main reverse fault, and, because of their coincidence with the Laramide structures, are interpreted as having been emplaced during the Laramide Orogeny.

Although the sand injectites are variable in thickness, they are remarkably uniform in composition. Hematite cement is abundant and imparts a red or purple coloration to the injectites. Among investigators of these sand injectites there is agreement that the Sawatch Sandstone (the Cambrian strata just above the basement) is the original source. Not only is the Sawatch the closest sandstone to the injectites, but there is also nearly identical compositional and textural similarity between them.

Many researchers have noted that the sand of the injectites was unconsolidated when forced downward into the open cracks.1,2,3 There is little evidence of breakage of sand grains, as if they were not cemented before injection, and there is a lack of fine matrix that would form from disaggregation of rock.

The actual field data strongly support the Laramide intrusion of the injectites. The Laramide event was of sufficient magnitude to open up the large extension fractures. Consequently, the coincidence of the injectites along the Ute Pass Fault, a proven Laramide structure, cannot be accidental, as Harms correctly claims.3 Geologists G.R. Scott and R. A. Wobus have mapped a quartz sandstone body one mile west of Manitou Springs on the east side of the Ute Pass Fault that penetrates Fountain arkosic sandstone (assigned to Pennsylvanian and Permian systems).4 In this case, the injectite cannot be Cambrian or Ordovician and would be naturally assigned to the time of the Laramide event.

A sequence of 12,000 feet of strata along the Ute Pass Fault was studied. The thick sequence of strata was still unconsolidated at the time of deformation, folding, or injection. The total time required for deposition of a sequence of strata, for regional flexing, for faulting, and for development of local deformational features must be less than the time it takes soft sediment—complete with necessary water and mineral cement—to harden into rock. The data support the creationist view that the deposition of strata and the actions of its folding/faulting/injections are concurrent, not consecutive. The violent continental plate movement and the vast amounts of sediment deposited during the Flood, as well as the deformation, happened during the same single-year event—just as described in Genesis!