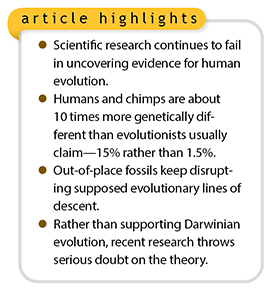 In 1997, the Institute for Creation Research ran an Acts & Facts article on the lack of compelling evidence regarding our supposed evolution from ape-like ancestors.1 Years have passed, and it’s time to see how the case for human evolution has fared since then.

It turns out, not so well. To begin with, secular publications are refreshingly blunt: “The past 15 years have called into question every assumption about who we are and where we came from. Turns out, our evolution is more baffling than we thought.”2 Another article admitted, “Because fossils are so scarce, researchers do not know what the last common ancestors of living apes and humans looked like or where they originated.”3

The work of ICR geneticist Dr. Jeff Tomkins shows that chimpanzee and human genomes are not nearly as close as the 98%+ traditionally touted by Darwinists.4 The most recent data show that the human and chimpanzee genomes are no more than about 85% similar.

Even studies comparing the saliva of man and ape fail to make an evolutionary connection. According to a secular publication, “We discovered unique protein profiles in saliva of humans that were distinct from those of non-human primates.”5

Anagenesis is an evolutionary term meaning “speciation,” a process in which numerous species originate along a single line of descent. Since 1996 (and well before), the “ancestor-descendant sequence” (anagenesis) of human evolution has been plagued with the problem of the child being born before the parent—or grandparent. Satisfying progressions from ape-like creatures to more human-like beings were—and are—constantly challenged by serious out-of-place fossil discoveries. Examples abound, such as two species of Australopithecus.

We further demonstrate that A. anamensis and Australopithecus afarensis differ more than previously recognized and that these two species overlapped for at least 100,000 years—contradicting the widely accepted hypothesis of anagenesis.…Most importantly, MRD [a newly discovered cranium] shows that despite the widely accepted hypothesis of anagenesis A. afarensis did not appear as a result of phyletic [evolutionary] transformation.6

In 2015, evolutionists introduced a fossil named Homo naledi that was immediately embraced as a human ancestor. Being comfortable with a date of three million years, “Prof [Lee] Berger [said] naledi could be thought of as a ‘bridge’ between more primitive bipedal primates and humans.”7 But alas, it has now been shown to be much younger than previously thought, overlapping with anatomically modern humans.8

And there’s more bad news. In 2002 Sahelanthropus tchadensis was discovered and declared an early human relative, but it “may not have been a hominin at all, but rather was more closely related to other apes like chimps.”9

When we turn to more recent human ancestors, we see they are 100% people. Secular scientist Michael Denton stated:

Neanderthals and Denisovans must be classed as subspecies or races of Homo sapiens, and this would suggest that they may also have had language and relatively high intelligence.10

Language and relatively high intelligence? Most of your neighbors would fit that description.

Vain efforts by evolutionary naturalists continue as they attempt to connect people with chimpanzees and shattered hominid fossils. Regardless, the message of the Bible is clear—man has been created in God’s image since the beginning.