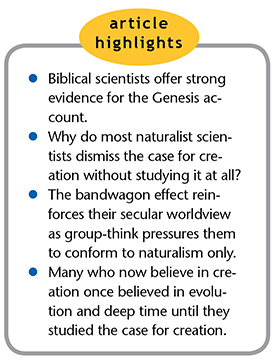 After an ICR scientist presents convincing evidence for biblical creation, listeners often ask, “If all you just said is true, then why don’t most scientists believe it?”

We may discuss Y chromosomes that contain only a few thousand years’ worth of mutations, as expected from Noah.1 We may talk about a sedimentary rock layer deposited by a mud pulse that blanketed a whole continent at once, as expected from Noah’s Flood.2 Hundreds of similar superb science examples support Scripture. How do nature-only scientists treat these observations?

For the most part, they won’t even look at them.

A human behavioral trend called the bandwagon effect might play a role in this avoidance. The American Psychological Association’s online dictionary defines it as:

The tendency for people in social and sometimes political situations to align themselves with the majority opinion and do or believe things because many other people appear to be doing or believing the same.3

When we ask “why don’t they believe in creation?” we assume that secular scientists use more pure logic than people typically do. Perhaps some robot mind would unerringly follow every data trend to its logical conclusion regardless of consequence, but not scientists. Humans may well refuse to see a conclusion that contradicts what everyone around them believes about origins.

In other words, one reason why they don’t believe in creation is that if they did, they would have to admit that almost everyone they respect is wrong about nature making us without one miracle. They would have to jump off the world-size bandwagon that refuses the divine.

A prior commitment to naturalism—the philosophy that nature is all—trumps evidence that points to the miracles of creation and the Flood.4 Can any evidence weaken their confidence in nature as the substitute creator? I suspect that depends on various factors, alongside the Holy Spirit’s work in a person’s heart.

Naturalists who bail from their bandwagon face ostracism. Do they have the emotional strength to stand against their peers? If “they loved the praise of men more than the praise of God” (John 12:43), then they let peer pressure trump good science.

Then there are spiritual implications. If a committed naturalist examines, say, the Y chromosome mutation rate or global sedimentary rock coverages that lead straight to Noah and his Flood, then where else does that lead? It would mean that the Bible has correct history and thus a correct assessment of personal sin. “The heart is deceitful above all things, and desperately wicked; Who can know it?” (Jeremiah 17:9). Many who refuse to admit to sin likewise refuse to hear evidence that implies it.

That’s what happened with the Pharisees in the New Testament. The Lord Jesus made the lame walk, the blind see, and raised people from the dead right in front of them. Talk about convincing evidence! He proved to be the One to “bear our iniquities and…the sin of many” (Isaiah 53:11-12). Those religionists rode a bandwagon of belief in Christ as a king and not an offering.

But some of them believed when they saw the evidence in Jesus Himself. Even some naturalists overcome peer pressure and begin to track with truth. I was one of them! I needed to see lives of peace renewed in Christ, and I needed to see that the Bible aligns with reality. God was kind enough to oblige.

We can cast seeds of truth with words of grace. The people we encounter might believe after all.