Subatomic Particles, Part 4: Gauge Bosons, the Glue That Holds the Universe Together | The Institute for Creation Research
Skip to main content


Have you ever wondered how a magnet “knows” to stick to a refrigerator? If you hold a magnet sufficiently close, it will actually jump out of your hand and attach itself to the metal surface. But how does it know that it is close to a refrigerator or which way to jump? It is not as if the magnet has eyes to see which direction to go. Somehow, it can sense the metal even though there is some distance between the two. How is this action at a distance possible? Physicists believe the answer involves subatomic particles called gauge bosons. 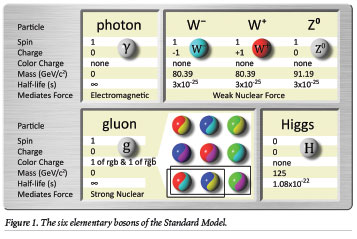 Most physicists believe that leptons and quarks interact by producing and absorbing gauge bosons and that this is how particles are able to project a force over a distance. Think of gauge bosons as subatomic messengers. They communicate information about the four fundamental forces between particles (gravity, electromagnetism, weak nuclear force, and strong nuclear force). Therefore, each type of force is associated with one or more gauge bosons. Let’s start by examining the electromagnetic force and its gauge boson, the photon.

Most physicists believe that the process works essentially as follows. A charged particle emits a low-energy photon toward another charged particle with the message “come a bit closer” or “move farther away from here” depending on the relative charges. When the other particle receives the photon, it responds by moving closer or moving away. Charged particles therefore “know” the location of other charged particles due to the exchange of virtual photons that tell them how to move. The term “virtual” means that we cannot directly observe the photon exchange; it is inferred based on our observations of how particles move. But the model does make correct predictions.

The photon itself is a massless, uncharged boson with spin 1. Recall that bosons are integer-spin particles that do not obey the Pauli Exclusion Principle. Photons are stable and are their own antiparticle.

Just as photons are the messengers of the electromagnetic force, so gluons (g) are the messengers of the strong nuclear force. Recall that the strong force has six types of charge, which we call red, green, blue, antired, antigreen, and antiblue. (These terms are unrelated to literal color.) Since there are six charges rather than two, gluon behavior is a bit more complicated than photon behavior. But the same basic principle applies: a quark will emit a gluon that is absorbed by another quark, telling it how to move. Gluons possess a color charge and simultaneously an anticolor charge (Figure 2).

Here is how it works. Recall that the three quarks of a baryon have color charge. One will be red, one green, and one blue (Figure 2A). The red quark emits a gluon. This gluon has color and anticolor. Let’s suppose the gluon is red and antiblue (Figure 2B). Since the baryon’s color charge is conserved, the red quark must change to a blue quark, with the gluon carrying away its redness and antiblue to cancel out the blue. This red-antiblue gluon is then absorbed by the blue quark, which turns it red (Figure 2C). The reaction causes the red and blue quarks to attract a bit, but it also swaps their colors. The same kind of process happens between the red and green quarks, and between green and blue quarks; they are constantly swapping colors by gluon exchange. At any given moment, the total color charge of the baryon is always white, because this is the sum of all the quark and gluon colors.

Like photons, gluons are massless, uncharged, spin 1 bosons. But unlike photons, gluons have not been directly observed. However, they do account nicely for the properties of the strong nuclear force. Furthermore, since gluons themselves possess color charge, they can interact with other gluons.3 Since gluons possess any one of three colors and any one of three anticolors, there are actually eight unique color combinations of gluons.4 Antigluons are also gluons because reversing all colors simply results in another gluon.

The weak nuclear force is able to change one type of particle into another at short distances. It is responsible for phenomena such as the radioactive decay in unstable atoms. The weak force is mediated by three different bosons: the W+, the W-, and the Z0 (see Figure 1). All three are spin 1 bosons. Unlike all other gauge bosons, these have mass and are unstable, which limits the range of the weak force.5,6 Since the W bosons have electrical charge (+1 or -1), a weak force interaction can change not only the type of particle but also the charge by ±1. For example, a down quark can decay into an up quark by emitting a W- or by absorbing a W+. Weak decays that do not alter the charge of the particle involve the Z0. The W- is the antiparticle of the W+ and vice versa. The Z0 is its own antiparticle.

The recently discovered Higgs boson is rather unique. It is an elementary boson but not a gauge boson (it does not mediate any of the fundamental forces). Rather, the Higgs boson is associated with the Higgs field, an invisible uniform “cloud” that permeates all of space and that is thought to set the mass of all particles. Most physicists believe that particles that strongly “feel” the Higgs field have more mass than those that feel it weakly. Massless particles, like photons and gluons, don’t interact with the Higgs field at all. The Higgs boson has a spin of zero, a charge of zero, and is extremely massive, more than a hundred times heavier than a proton. Some people have referred to the Higgs boson as the God particle because it supposedly “rules” over all other particles by setting their mass. However, most physicists do not use this nickname.

We have seen that the electromagnetic force, the strong force, and the weak force are mediated by gauge bosons. Some readers may be wondering about the gravitational force. Is it also mediated by the exchange of bosons? The gravitational force is not part of the Standard Model of particle physics because it is so much weaker than the other forces that it can be neglected at quantum scales. Nonetheless, most physicists believe that gravity is also mediated by a gauge boson that they call the graviton. This undiscovered particle is predicted to have a mass of zero, a charge of zero, and a spin of 2.7

Another particle predicted by the Standard Model but undiscovered is the glueball, a composite particle made of interacting gluons but with no quarks. Combinations of four or five quarks/antiquarks have been reported but not yet experimentally confirmed.8

Some models of physics go beyond the Standard Model and predict, or at least allow, the existence of particles that have not yet been experimentally observed. Tachyons are a class of hypothetical particles that move faster than the speed of light.9 However, most physicists believe that they do not exist.10

Supersymmetry models predict the existence of an extremely massive elementary boson “partner” for each type of elementary fermion. Thus, quarks would have boson partners called squarks, and electrons would have corresponding selectrons. None of these have been observed.

Having explored the 18 known elementary particles and their properties, we are struck by the orderly way in which they may be classified (see Figure 3). Why such logical organization? What worldview can make sense of this?

In the biological sciences, living organisms can be classified into a logical hierarchy (order, family, genus, species). Creationists expect this because God is logical and has imposed order on His creation. Despite substantial evidence to the contrary, secularists still tell us that evolution is the way to account for such a hierarchy, that all organisms have similarities because they share a common ancestor, and differences are due to the cumulative effect of tiny changes over billions of years.

However, evolution cannot account for the hierarchy of particles because particles do not gradually evolve. Even when particles decay, the transition is essentially instantaneous and always results in one of the 18 known elementary particles. It is not as though the electron somehow gradually gained mass over millions of years until it became a muon. Elementary particles cannot gradually change, and so we cannot appeal to evolution or any chance process as the explanation for their hierarchical classification. Only if the universe is upheld by the mind of God can we account for such order.

The way in which God controls the universe is so logical and mathematical that we can assign equations to it and even predict the statistical outcome of many particle interactions. We can compute the electromagnetic force accurately over great distances because of God’s order. The four fundamental forces are not a replacement for God’s power but an example of God’s power. They merely describe the ordinary way God upholds creation, and we could not make sense of them apart from biblical revelation.

We have seen the delicate balance between the four forces; each is perfectly designed to make life possible. We have explored the fleeting nature of so many subatomic particles. Yet the ones needed for atomic chemistry and life are stable. The masses and forces are precisely tuned. If the up quark were just slightly heavier than the down quark, all matter would decay into neutrons. Slightly change the charge of an electron or a quark and atoms could never form larger structures due to electric repulsion. It’s clear the universe is perfectly designed for life.

Furthermore, aside from the photon, subatomic particles are not things we can see with our eyes. Most of the gauge bosons cannot be directly observed by any modern apparatus. Gluons are apparently confined within the nucleus of an atom and are far smaller than we can observe. W± and Z0 bosons decay so quickly that they cannot be directly observed. Rather, we infer the existence of these particles due to the effects they produce on things we can see. Therefore, we have a well-justified faith (evidence of things not seen)11 in these particles and their properties. Similarly, we cannot normally see God with our eyes, but the evidence of His upholding power is displayed throughout the cosmos—from the smallest bosons and quarks to the largest galaxies.12