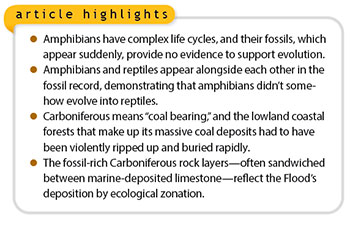 Many creationists and evolutionists alike are familiar with the initial huge explosion of complex marine life buried in the Cambrian rock layers at the beginning of the fossiliferous strata,1 but few people know about the explosion of land-based life in the Carboniferous and Early Permian. While evolutionists have engendered a great deal of speculation about amphibians somehow morphing into reptiles as a central part of the grand evolutionary story and the early colonization of land, the supporting fossil evidence for this conjecture is lacking. Instead, we see a massive explosion of diverse amphibia and reptile-like creatures alongside a huge diversity of plant life and arthropods representing lowland coastal ecosystems.2-6

When we consider these fossils in the Carboniferous and Early Permian rock layers, we have a direct witness to the enormous destruction and burial of lowland coastal ecosystems during the first phase of global land inundation in the Genesis Flood.7

Modern ecology of amphibia and reptile-like creatures is diverse. Most types live on land, underground, in trees, or in freshwater aquatic environments such as streams, lakes, and rivers. They are categorized as ectotherms (cold-blooded) because their body temperature is heavily influenced by external sources such as sunlight or warm surfaces. Many amphibians will start their lives in water, but some types have specific mechanisms to bypass this. They generally have complex life cycles, undergoing metamorphosis from a larva with gills to an adult with lungs that breathe air. One of the most amazing features of some amphibians is the ability to use their skin with their lungs to breathe. In fact, there are even a few small terrestrial frogs and salamanders that have no lungs and breathe completely through their skin. 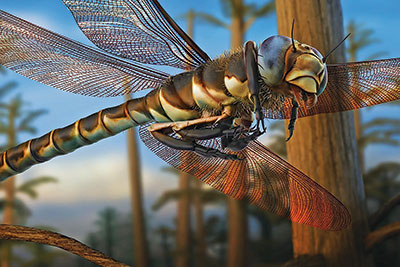 The three main groups or orders of living amphibians are Anura (frogs and toads), Urodela (salamanders), and Apoda (the serpentine caecilians). Among secular scientists, the origins and evolutionary relationships between the three main groups of amphibians are hotly debated.6 About 90% of the approximately 8,000 known amphibia are frogs, including a tiny frog that is the smallest known vertebrate, having a length of only 0.30 inches. Frogs and salamanders have no evolutionary history and show up suddenly in Jurassic strata looking similar to their living counterparts. Caecilians are a group of limbless amphibians shaped like earthworms. They are one of the least familiar amphibians because they live hidden in the ground and in stream beds. Their evolutionary origins are a complete mystery, with one alleged legged variant showing up in the Jurassic.

As far as the big picture of biological evolution goes, the idea of an amphibian as a transitional form plays an important role. Based solely on the premise of evolution (rather than fossil evidence), it is believed that the earliest amphibians evolved in the Devonian system (the so-called Age of Fishes) from lobe-finned fish with lungs (e.g., lungfish) and bony-limbed fins to somehow leave a watery life and live on dry land. As I showed in several previous articles, this whole claimed fish-to-tetrapod transition is absent in the fossil record.6,8 Nevertheless, it is taught that after arriving on land, these ancient hypothetical amphibians diversified and became the dominant land creatures during the Carboniferous and Permian periods but were later displaced by reptiles and other vertebrates. Then, as the story goes, over millions of years amphibians became smaller and decreased in their diversity.

The problem with this amphibian evolutionary story is that extinct amphibian-like creatures appear suddenly and already diversified in the Carboniferous layers, while the three major groups of living amphibians appear suddenly without prior ancestors in the Jurassic. In previous articles, I showed how the Devonian strata contained only diverse types of fish and fish-like creatures, and how complex terrestrial life emerged suddenly afterward with no window for evolution.6,8,9 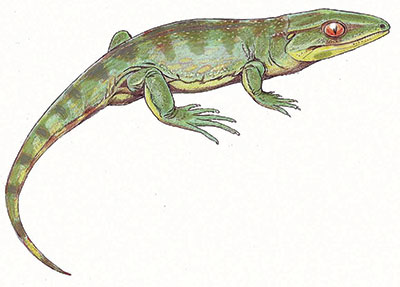 Temnospondyli are a diverse group of small to giant amphibian-like creatures whose fossils have been found in the Carboniferous, Permian, and in the layers above on every continent. Their systems enable them to fill a wide range of habitats, including fresh water, terrestrial, and possibly coastal marine environments. They are considered amphibian-like based on a range of fossils representing a complex amphibian lifestyle (larval stage, metamorphosis, and maturity). Their bodily traits indicated they were semi-aquatic, although some were thought to be almost fully terrestrial—possibly returning to water to breed. In fact, it’s possible that some temnospondyls were not amphibians at all since they had scales, claws, and armor-like bony plates.

Reptiliomorphs (or Anthracosauria) are a group of reptile-like tetrapods that appear suddenly and unexpectantly in the fossil record alongside the Temnospondyli, leaving virtually no room for amphibian-to-reptile evolution to occur. For example, Westlothiana (nicknamed “Lizzie”) was discovered in early Carboniferous rocks, and although it clearly looked like a terrestrial lizard, it was not considered a true lizard largely because it was out of place in the tetrapod evolution story. In addition, many other lizard-like reptile creatures have been found in Carboniferous rock layers, such as Gephyrostegus and Limnoscelis. The main evolutionary problem is that terrestrial amphibian-like and reptile-like creatures appear in the same strata with no room for evolution to take place from one to the other. 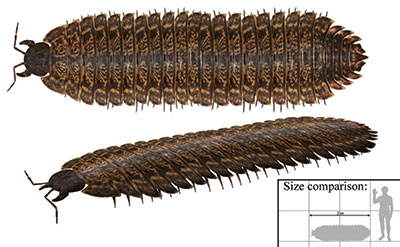 In my previous article I mentioned the sudden appearance of land life in the early Carboniferous, which also included arthropods such as giant scorpions.6 The appearance of monster arthropods throughout the Carboniferous included huge dragonflies (Meganeura) with two-foot wingspans and a type of millipede called Arthropleura that was up to six feet long. While most believe that Meganeura preyed upon smaller arthropods and freshwater creatures, Arthropleura was actually a plant eater. We know this because the remnants of a lowland coastal tree called a lycopod have been found in its gut and coprolites (fossil feces). The presence of extremely sophisticated creatures like a dragonfly early in the rock record of land creatures does little to help the evolutionary story. Adult dragonflies have a complex life cycle. Their larvae live underwater as a vicious predator and then eventually metamorphosize into an adult dragonfly, one of the most complexly engineered insects known.

Another interesting aspect of the Carboniferous and Early Permian rock layers is the sudden appearance of true ferns and seed plants representing coastal lowland forests. Some of these plants like the Lepidodendron grew as tall as 100 feet. Not only does this sudden appearance of diverse plant life without any evolutionary ancestors to indicate a transition from growing in water to living on land present a problem, but so does the nature of the extensive mass burial of this plant matter. This huge mass of ripped-up plant debris had to have been buried rapidly to form the massive coal seams that are observed in various parts of the world. In fact, this is where we get the name Carboniferous, which means “coal bearing.”

Even more interesting is that these Carboniferous coal layers are buried with marine sediments. Marine limestone layers are common right above and below many of these coal beds. This has completely perplexed evolutionists who have for decades erroneously claimed that coals form slowly over deep time in freshwater environments. The late paleontologist Jennifer Clack noted that these massive Carboniferous coal seams indicate an “extensive, large-scale event” and “the coal forest sediments are covered by marine deposits.” When trying to surmise the sort of ecosystem that they might have represented, she said, “The lowlands and marshy regions can support such extensive plant growth.”4

Putting It All Together with the Global Flood

How is it that we find entire coastal lowland ecosystems catastrophically buried and preserved as fossils and coal—a fossil fuel—along with sediments of marine origin in these Carboniferous rock layers? The answer is simple. If one abandons the false paradigm of evolution, which has little to offer in explaining the trends and complexities found in the fossil record, one finds a loving Creator specializing His creatures for their environments. As noted in this article, immediately above the Devonian strata (which is full of fish and other marine life) comes the Carboniferous layer where land arthropods, lizard and amphibian-like creatures, and coastal forest plants all suddenly appear together. In the global Flood model, we can easily explain this as the progressive destruction caused by the tsunami-like global floodwaters. A sweep of massive waves violently inundated the major landmasses in their lowland coastal regions. Because these coastal low-lying areas had very tropical climates and likely contained a lot of marsh-like forest habitats, we see in these layers both plants and animals that were specially adapted to these conditions.

According to the global mapping of Flood layers known as megasequences, the deposition of the Late and Early Carboniferous (and Permian) corresponds to the end of the Kaskaskia Megasequence and the beginning of the Absaroka. These two megasequences were part of the continual advance of the floodwaters across higher and higher elevations described in Genesis 7. These rock layers perfectly represent the global destruction of lowland ecological systems and reinforce a creationist model of paleontology based on global Flood burial by ecological zonation.