One of the greatest unsolved mysteries in the grand scheme of evolution is the transition between jawless and jawed vertebrates. In a previous article, I documented how jawless vertebrate fish appeared along with a host of creatures with diverse body plans in the Cambrian Explosion at the beginning of the sedimentary fossiliferous rock record.1 Despite many fossil discoveries of numerous vertebrate fish over the past several hundred years, not a single transitional form has been found showing how jawed fish could have developed from jawless ancestors. In fact, numerous types of jawed fish appear suddenly in the rock record alongside new types of jawless fish.

Jawed vertebrates are known as gnathostomes and make up more than 99% of all known living vertebrate species, including humans. This incredible diversity is based on key defining categorical features: jaws, teeth, paired appendages, and specialized skeletal tissues. Evolutionists have struggled for over a century to explain the origins of these major anatomical features that appear suddenly in the fossil record with no ancestral precursors. Regarding the origin of jaws, the evolutionary problem was aptly stated in a recent edition of a book on vertebrate evolution: “How did the great transformation from ‘jawless suckers’ to the ‘predatory monsters’ of the oceans occur, involving the evolution of organized dentitions and jaws?”2 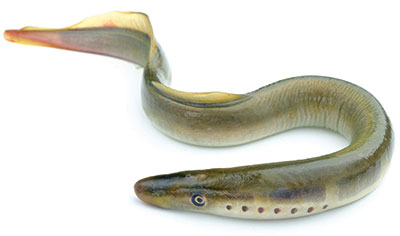 Where Did Jaws Come From?

The classic idea among evolutionists is that jaws somehow morphed from gill arches at the front end of a so-called primitive fish. In jawless fish (Agnatha) such as lampreys (Figure 1) and hagfish (Figure 2), gill slits directly behind the mouth are separated from each other internally by cartilaginous arches, uniquely hinged and engineered skeletal features that allow the gills to function. Amazingly designed gills enable fish to breathe underwater by pulling in oxygen-rich water through their mouths and pumping it across the gills.

According to evolutionary theory, a hypothetical vertebrate ancestor with nine gills and eight gill arches had the three gill arches closest to the mouth morph into the three essential components of a primitive jaw—an obviously huge anatomical change or evolutionary jump.2-3 In the simplest imaginary scenario, these three arches would have somehow evolved to form the main part of an upper jaw, the core part of a lower jaw (mandible), and a new skull bone with a specialized hinge joint to interface with the mandible. 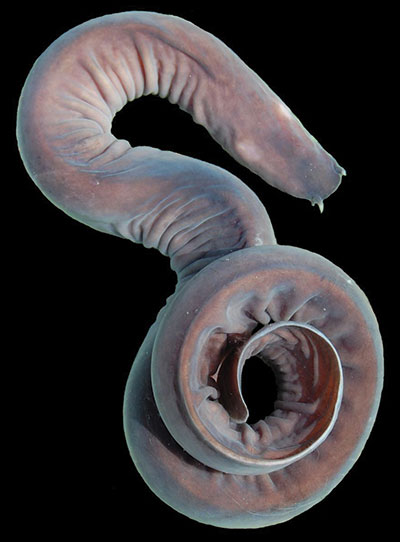 Significant modifications to the skull needed for jaw function make the evolutionary conundrum even greater, as noted in a recent paper: “The evolution of the upper jaw also requires more study, as its modification appears to be more complex than the lower jaw.”4 And this says nothing of the highly specialized muscles and neurological features and connections needed to make it all work.

Not surprisingly, speculation among secular academics has been contentious as to the immense complexity of this system somehow arising by random evolutionary processes. A recent textbook on vertebrate evolution noted, “The evolution of developmental processes that gave rise to articulating jaws are [sic] very controversial.”2

Secular scientists have speculated that the next step up the evolutionary ladder from lampreys and hagfish is the ostracoderms (shell-skinned), an extinct group known as armored jawless fish. Ostracoderms’ heads were covered with a bony shield, and they existed in three major groups. One group known as heterostracans, believed to be the more primitive of the three, had two armored plates that formed large shields over their upper and lower bodies. They also had a series of unique and unusual scales arranged in various patterns on the sides of their bodies, with the exact patterns differing from one heterostracan kind to another.

The other two groups of extinct jawless armored fish are called galeaspids and osteostracans. Evolutionists claim osteostracans were more advanced than heterostracans because they had lateral stabilizers used for swimming control. Osteostracans ranged from bottom-dwelling to open-water swimmers. In a recent article, ICR zoologist Frank Sherwin showed how research has revealed the unique hydrodynamic properties of the various osteostracan kinds that fitted them to inhabit different oceanic ecosystem levels.5

At this point in our progress up the mythical vertebrate evolutionary tree, we see no sign of jaws and are still in the superclass Agnatha. However, the presence of extremely sophisticated armored fish that had amazing traits that aren’t even found among living fish today utterly confounds evolutionists because they suddenly appear in the fossil record fully formed and uniquely complex.

Sudden Appearance of Jaws in Placoderms

Next up on the evolutionary tree is a group of armored fish called placoderms that show up in the Late Silurian system about 440 million years ago according to secular dating (Figure 3). What makes the placoderms so interesting is that they have fully developed jaws. Evolutionists are befuddled as to where these placoderm jaws came from. And to make matters worse, the jawless armored fish ostracoderms—the alleged ancestors of these jawed fish—lived alongside placoderms without any noticeable decline for about 30 million years. And during this period, absolutely no evidence of a transitional semi-jawed fish leading from jawless to jawed has ever been found. 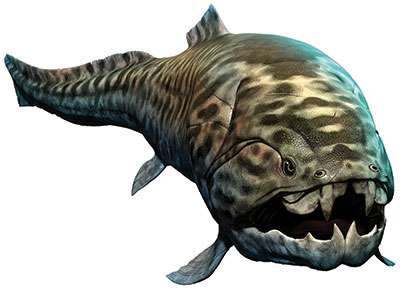 Placoderms were fascinating creatures and have left behind some spectacularly well-preserved fossils. Their head and thorax were covered by articulated armored plates, and the rest of their bodies was covered with either scales or skin, depending on the kind. Their jaws often consisted of a single bone and were quite elaborate, with some seemingly as sharp as scissors. Some even had true teeth. Placoderms were also unique in that they had pelvic fins. The various kinds of placoderms were very diverse and abundant during the Devonian system but disappeared at the end of the Devonian in a huge extinction event 359 million years ago in the evolutionary timeline.

But the placoderm evolutionary story gets even more convoluted because according to the fossil record they also coexisted with so-called more modern bony fishes. One evolutionary paper stated that “a wide diversity of placoderms coexisted with lungfishes and primitive ray-finned fishes.”6

An important issue directly related to the origin of jaws in vertebrates further compounds the evolutionary conundrum. The so-called deepest split among vertebrates, and one of the more glaring anomalies in the hypothetical gnathostome evolutionary tree, occurs between the cartilaginous fish called chondrichthyans (sharks, rays, and chimaeras) and osteichthyans (bony fishes). This mythical transition between cartilaginous and bony fish took place suddenly at the end of the Silurian.

Evolutionists lament the fact that this abrupt appearance of both cartilaginous and bony fish at the same time with no evolutionary precursors left a “vast temporal and evolutionary gulf between modern lineages.”7 Many of the first attempts at claiming transitional forms for such jawed fish creatures as placoderms ended up showing that their unique traits were not transitional at all but “specialized rather than primitive upon phylogenetic investigation.”7 This issue is also very troublesome for the gill-arch-to-jaw evolutionary story because some fish, like sharks and lampreys, possess multiple gill openings, while bony fish have a single gill opening on each side.

The hard facts of the fossil record lend absolutely no support to the evolutionary transition from jawless to jawed vertebrates. The major groups of fish—jawless fish, placoderms, cartilaginous fishes, spiny sharks (acanthodii), ray-finned fishes, and lobe-finned fish—all coexisted during the so-called Age of the Fishes known as the Devonian system with no transitional forms connecting any of the groups.

More specifically, there is no evidence of jaw evolution occurring. Jawed fish appear suddenly in the fossil record. Evolutionists have admitted to this current paleontological crisis, stating, “Ideas about the origin of gnathostomes are currently in a state of flux,” and “the tangled skein of jawed-vertebrate origins continues to challenge researchers.”6

So, how do we explain five different groups of jawed fishes along with new kinds of armored jawless fishes showing up suddenly in the fossil record within the same narrow evolutionary window near the start of the Devonian period? And if evolution can’t explain this massive fish fossil conundrum, what does creation science have to offer?

The answer is that creation science provides a compelling explanation. ICR geologist Dr. Tim Clarey has demonstrated in his global geologic column research that the beginning of the Devonian corresponds with the initial sedimentary deposition of the Kaskaskia Megasequence.8 The Kaskaskia is the third megasequence and follows the Sauk and the Tippecanoe. ICR’s Column Project research team has demonstrated that each megasequence exhibits progressively more surface coverage of the continents. This indicates that the tsunami-like waves that produced them were becoming higher and higher and probably sourcing deeper and deeper water.8

For this reason, the Kaskaskia likely transported animals that lived in deeper water compared to the two earlier megasequences, and hence the sudden appearance of so many types of fish. Ocean creatures living in offshore coastal ecosystems would have been catastrophically transported and buried in these sediments during this depositional episode of the global Flood. And this is exactly what we see.

When we consider that every sort of complex creature, including fish, was created after its kind and that a huge diversity of marine life was killed and buried catastrophically in the global Flood—largely by ecological zonation—the fossil record fits into place perfectly. The solution to the mystery of jawed fish is found in Genesis.