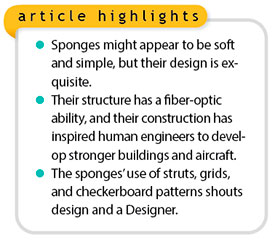 The oceans are alive with God’s diverse and amazing creatures. Scripture tells us “God created great whales, and every living creature that moveth, which the waters brought forth abundantly, after their kind.”1 Both vertebrates (e.g., sharks and whales) and invertebrates (e.g., clams and crabs) were created just thousands of years ago, including the allegedly “simple” sponge.2

Zoologists see “the exterior simplicity of a sponge mask[ing] chemical and functional sophistication.”3 For example, the spicules of a certain sponge (class Hexactinellida) are composed of calcareous or siliceous material designed by the Creator to transmit light via fiber optics deep into the sponge’s photosynthetic tissue.

The fiber optics of siliceous spicules have now been confirmed. This has sparked interest among materials scientists and engineers in the enzymatic machinery needed to form silica nanoparticles and to fuse these particles into spicules inside and outside the sponge cells.3

Did this sponge achieve such sophistication by just chance and many millions of years? What was the origin of sponges—did they evolve from a non-sponge ancestor? Evolutionists can only say sponges have existed as sponges for nearly a half-billion years (the early Cambrian period) and, “according to some claims, the Precambrian.”3

Regardless, sponge construction continues to amaze. Recently, it was reported that scientists “are using the glassy skeletons of marine sponges as inspiration for the next generation of stronger and taller buildings, longer bridges, and lighter spacecraft.”4 Why? It’s because in one case,

a deep-water marine sponge [Euplectella aspergillum, common name Venus’ flower basket], has a higher strength-to-weight ratio than the traditional lattice designs that have been used for centuries in the construction of buildings and bridges. “We found that the sponge’s diagonal reinforcement strategy achieves the highest buckling resistance for a given amount of material, which means that we can build stronger and more resilient structures by intelligently rearranging existing material within the structure,” said Matheus Fernandes, a graduate student at SEAS [Harvard John A. Paulson School of Engineering and Applied Sciences] and first author of [a related paper published in Nature Materials].4

Science writer Bruce Fellman states, “Biomechanics studies how the design and construction of plants and animals obey and even capitalize on the laws of physics.”5 Such overt biomechanical design, as seen in the Venus’ flower basket, has been discussed by the Institute for Creation Research in the past.6 The more one studies Euplectella (not to mention other creatures), the more one logically comes to a design inference. “To support its tubular body, Euplectella aspergillum employs two sets of parallel diagonal skeletal struts, which intersect over and are fused to an underlying square grid, to form a robust checkerboard-like pattern.”4

This is creation morphology, the bringing together of structural information as we observe, measure, and research God’s creatures using the perspectives of  function, form, ecology, and design. It is perfectly natural to ascribe this living architecture to the just, loving, universal Architect of the Bible.