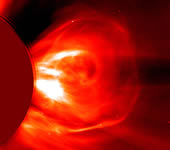 Saturn, Enceladus, and Blue Stars
Saturn is too hot for its evolutionary age. It should’ve cooled off if it were 4.5 billion years old. What can we learn about the age of...
BY: BRIAN THOMAS, PH.D.

Big Bang Fizzles under Lithium Test
Secular astrophysicists often talk about “primordial nucleosynthesis” as though it were a historical event like Washington crossing the...
BY: BRIAN THOMAS, PH.D.
More Creation Q&A