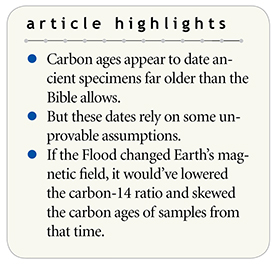 Many reporters and scientists treat carbon dates like facts. Of course, the more recent dates work well enough. But news reports, textbooks, and even movies present enormous ages like “47,000 BCE” all the time.

Yet, the Bible records only about 6,000 years from creation until today. Does the science of carbon dating disprove the Bible’s reckoning? To find out, we need to peek into the carbon dating process that specialists use to arrive at tens of thousands of years.

Carbon-14 is an isotope of the element carbon. It forms from nitrogen high in the sky at a certain rate on today’s Earth. It turns back into nitrogen usually long after it filters back down to Earth and enters plant and animal tissues. A sensitive instrument measures the ratio of carbon-14 in organic remains to the more common and stable carbon-13 and carbon-12 isotopes. No scientist can measure the actual age of any artifact. We can measure amounts of things, like grains of sand in the two chambers of an hourglass, but not ages. Carbon dating is no exception. It begins with isotope ratio measurements. Scientists must use math formulas to convert isotope ratios into age estimates. 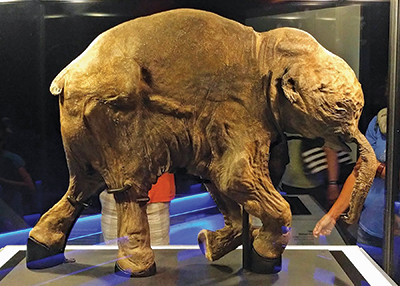 The formulas they use have unknowns—numbers that cannot be measured. Workers make four key assumptions for these unknowns:

Even when a radiocarbon laboratory measures very precise isotope ratios in a sample, any age estimate from the formula will only be as good as the four assumptions that went into it. Let’s accept the first three assumptions for the sake of argument. How can anyone cross-check the fourth one?

Here’s the catch. If Noah’s Flood actually happened about 4,500 years ago, as the Scriptures record, then it would have affected, and possibly steamrolled, carbon-14 ratios in very old samples.1 In particular, Earth’s magnetic field strength has weakened since the Flood. Almost two centuries of measurements show that Earth’s magnetic field still decays. Back when it was much stronger, it would have stymied carbon-14 production in the sky. Fewer carbon-14 atoms in plant and animal specimens (a lower carbon-14 ratio) would give them far more carbon years than they deserve.2,3

When it comes to artifacts from the last 2,000–3,000 years, carbon dates generally match historical ages. But the magnetic field strength has been pretty constant across that timespan. What about the vast ages assigned to older Ice Age material like mammoth bones? Those who treat very old carbon years as if they were actual years must assume that the Flood and its drop in magnetic field strength never happened.

In the end, whoever insists that carbon dates of tens of thousands of years refute the Bible’s 4,500-year-old Flood merely reasons in a circle. Of course, the Bible’s Flood never happened in the minds of those who already assume it never happened! On the other hand, placing the Flood back into world history reveals a bad assumption beneath higher carbon ages. The Bible, not carbon “ages,” gives us reliable history.