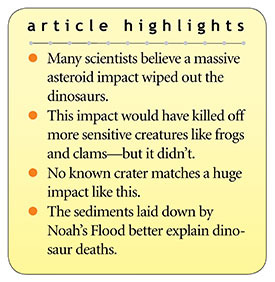 During a recent visit to a church, I told a group of children how and why Noah’s Flood fossilized the dinosaurs. A boy told me he saw a documentary that said an asteroid impact killed the dinosaurs. Did an impact or the Flood kill them? Three science clues help answer this question.

One clue is frogs. An impact powerful enough to demolish thick-skinned, tough, monstrous dinosaurs all over the world surely would have erased thin-skinned amphibians first. The same goes for certain sensitive clams, but that didn’t happen. Frog and clam fossils found near dinosaur bone fossils look the same as today’s frogs and clams.1 Harmful chemicals go right through porous frog skin, and silt chokes clam gills, so how did they survive and not dinosaurs?

Next, where is the impact crater? An impact large enough to wipe out all the world’s dinosaurs should have left a huge, round pit. Most scientists who study this think a region beneath the southern Gulf of Mexico and northern Yucatan Peninsula represents the impact site. However, others disagree for good reasons.

For one thing, the underground feature at that site is not round. Plus, an impact with worldwide destructive force would have melted rocks, but the site has very little melted rock. The rocks down there don’t need an impact to explain them. Magma that rose from the depths could have made the rocks the way we see them today.2 Why should we believe an impact killed the dinosaurs if we can’t find a crater that fills the bill?

The size and shape of rock layers give us a third clue that the Genesis Flood, not an asteroid impact, best explains the dinosaur fossils they contain. Each of these rock layers can cover thousands of square miles! A single layer can cover several states. For example, the Hell Creek and Lance Formations were deposited at the same time. They span Montana and Wyoming, plus parts of other states.

How could an impact way down in Mexico deposit this thick layer so far away? An impact should make a wedge-shaped layer, with mud thinning out from the crater. But actual dinosaur layers keep the same thickness for hundreds of miles. Noah’s Flood could do that.

The Bible says that surging Flood waters took months to cover the whole globe. Sure enough, dinosaurs got buried in mud on every continent. And this Flood happened about 4,500 years ago, not 66 million years ago. Science supports this, too. Erosion over millions of years would have carved ruts. Where are the expected ruts between the layers? Instead of erosion ruts, the upper surface of each layer looks flat, as though hardly any time passed before the next layer was laid on top of it by the next huge Flood surge.

Did an asteroid impact kill the dinosaurs millions of years ago? No way. Noah’s recent Flood formed dinosaur fossils fast all over the world.4