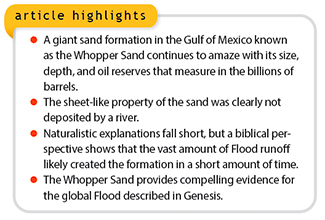 The Whopper Sand was first discovered about 200 miles off the coast in the deep Gulf of Mexico in 2001.5 The first well penetrated an unexpected 1,300 feet of nearly pure sand near the bottom of the Paleogene interval, coincident with the base of the Tejas Megasequence.5

Surprisingly, the newly discovered sand had sharp boundaries on the top and bottom.6

Furthermore, Rosenfeld described the sand layer “as being sheet-like rather than channelized.” Apparently, no river systems, such as the Mississippi River, could have formed the Whopper Sand.6

Uniformitarian scientists remain puzzled. How could a massively thick and clearly defined sand layer reach these depths and distances offshore? Drilling proves that these sands are thicker and more extensive than initially imagined. Although geologists have found some channelized (river-like) sands and pancake-like thin sands in deeper parts of the Mississippi Delta, it was thought that thick pure sands could not be transported great distances out to sea (200-plus miles).

The recent discoveries by Shell confirm that the Whopper Sand extends beyond 40,000 square miles across the deep Gulf of Mexico in water depths approaching 10,000 feet.7 It is commonly over 1,000 feet thick and can be up to 1,900 feet thick.7

A naturalist worldview proves insufficient to explain how the Whopper Sand formed, but biblical history provides a reasonable answer. The Whopper Sand was likely deposited as floodwaters shifted direction and began to drain off the North American continent after Day 150 of the Genesis Flood. The resulting high-energy sheet flow was able to transport a massive volume of sand a great distance into the deep water of the Gulf. As the water eventually slowed, more clay and less sand were deposited. Today, we find the Gulf dominated by clay deposition.