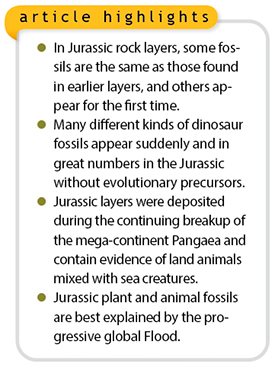 The Jurassic system of the geologic column is an enigma to evolutionists because it represents a continuance of many life forms found buried below in Triassic strata, combined with yet another alleged and convoluted mass extinction at the onset. In addition, many unique life forms make mysterious sudden appearances in the Jurassic with no prior evolutionary ancestry.

This massive and enigmatic fossil assemblage is also accompanied by the clear signs of the accelerating breakup of a once-existent mega-continent, Pangaea. However, the evolutionary convolution of this quandary of catastrophically buried fossils and tectonic anomalies makes perfect sense when we apply a model of sequential burial by ecological zonation and rapid plate tectonics interpreted within the global Flood of Genesis.

Triassic-Jurassic Extinction Not So Clear

As I mentioned in my previous two articles in this series, one of the chief enigmas that evolutionists have at the beginning of the Triassic is an apparent mass extinction event at the Permian-Triassic (P-T) boundary.1,2 But these ongoing mysterious and convoluted so-called extinction events throughout the geological record continue to be a recurring problem that’s difficult to explain from evolutionary assumptions.

The Triassic-Jurassic (Tr-J) extinction, which may also be called the end-Triassic extinction, marks the boundary between the Triassic and Jurassic periods supposedly 201 million years ago.3 It’s also considered to be one of the major extinction events of the Phanerozoic. In the oceans, it’s estimated that about 23 to 34% of marine genera disappeared at this level. On land, a large variety of reptiles dropped from the fossil record, but crocodylomorphs, pterosaurs, and dinosaurs somehow magically avoided extinction.

Among evolutionists, there’s a great deal of confusion regarding a clear connection between the Tr-J boundary and the terrestrial vertebrates that either disappeared or went on to thrive. Another confusing aspect for evolutionists is the fact that plants and mammals also seemed to be relatively unaffected and that the dinosaurs and pterosaurs became the dominant land animals for the next 135 million years of the evolutionary timescale. 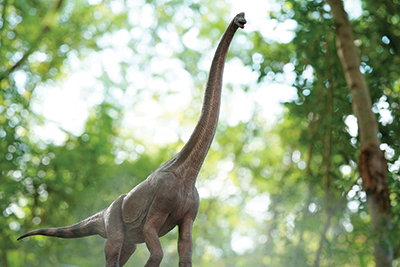 Dinosaurs are often held up as proof of deep evolutionary time and have even been popularized in movies like the famous Jurassic Park series. As I noted in my previous installment in this series, this diverse group of reptiles make their first sudden appearance (without evolutionary ancestors) in the Triassic.2 In the Jurassic, even more fantastically designed dinosaur kinds make their first appearances, utterly defying evolution.

One of the most well-known, awe-inspiring, and evolution-defying dinosaurs is the Brachiosaurus, which was popularized in a jaw-dropping scene in the first Jurassic Park movie. Brachiosaurs make their initial appearance in the upper Jurassic sediments along with other types of large long-necked sauropods, such as Apatosaurus.4 Brachiosaurus had longer front legs than back legs compared to many other sauropods, which gave it the high upward-angled neck and head characteristic of its type.

Not only is this unique dinosaur body type especially distinctive, but the massive size of these creatures also befuddles evolutionists. Brachiosaur fossils found in North America indicate that these creatures weighed about 30 to 60 tons. Another massive Jurassic sauropod was Diplodocus. It had a much longer tail and shorter front legs and could get up to 105 feet long and 12 to 18 tons in size. The sudden appearance of such massive and uniquely engineered sauropod creatures with no evolutionary precursors is a strong testimony to the Creator God. 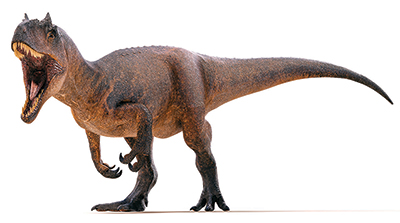 Another popular dinosaur of note in the Jurassic was Allosaurus, which was a large bipedal reptile found in Upper Jurassic sediments.4 Its name means “different lizard,” giving reference to the fact that it was unique and unexpected at the time of its discovery and also had unusual concave vertebrae. Based on fossil evidence, it averaged about 33 feet in length, with some specimens as large as 39 feet. It had large and powerful hind limbs and small three-fingered forelimbs. Its well-designed body was perfectly balanced by a long and heavily muscled tail. Allosaurus would have been a fierce and intimidating creature, weighing about 2.5 tons. Like the Jurassic sauropods, Allosaurus appears suddenly in the fossil record with no evolutionary precursors.

Yet another popular dinosaur from the Jurassic is the unusual Stegosaurus (“roof lizard”), characterized by the distinctive upright plates along its back and tail, along with an array of spikes at the end of its tail. Stegosaurus was a four-legged armored dinosaur that was a plant eater. It had a formidable array of plates that grew along the back that could have been used to appear bigger to predators. Alternatively, its back plates may have been used for sexual display and/or for providing some sort of thermoregulatory function. Stegosaurs were also quite large and could get up to 18 feet long and up to 9.5 feet tall. Stegosaurus may have lived alongside other dinosaurs such as Apatosaurus, Diplodocus, Brachiosaurus, and even Allosaurus. Needless to say, this highly unique creature also appears suddenly in the fossil record with no trace of evolutionary ancestors.

Pterosaurs are a diverse group of flying vertebrates that do not meet the definition of a dinosaur but show up in Triassic rocks at the same time as the first dinosaurs and then increase and persist throughout the sedimentary layers of the Jurassic. While evolutionists consider them to be early evolved flying vertebrates, their sudden appearance without any evolutionary precursors supports the biblical account of their creation along with other flying creatures during the Genesis creation week. Pterosaurs had wings formed by a membrane of skin similar to a bat, with the muscle and other tissues stretched from the ankles to an extremely long fourth finger. Their unique design would have made them powerful and efficient flyers, even having the capacity to dive into water to snag fish. 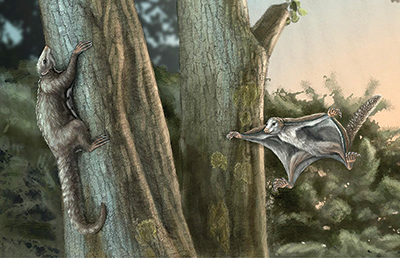 What isn’t commonly known is that in addition to dinosaurs and pterosaurs, Jurassic rock layers also contain a large array of mammals.4 Jurassic mammals were diverse and generally fairly small, although some have been found up to three feet in length. Many resemble squirrel and beaver-like creatures. Not only were there many mammals adapted to life on land, including semiaquatic forms, but there were also several flying mammal kinds (Maiopatagium and Vilevolodon). These aerial mammals mystify evolutionists because they not only occur suddenly but also very early in the fossil record of mammals with no viable ancestors. In fact, these mammal fossils clearly show gliding membranes, along with limb, hand, and foot proportions perfectly suited to aerial locomotion and behavior.

Explaining the Jurassic Puzzle with the Global Flood

As I mentioned in my previous article,2 global megasequence research at the Institute for Creation Research indicates that the initial rifting in the breakup of the pre-Flood mega-continent referred to as Pangaea began in the Triassic. This breakup involved a progressive increase in global tectonic activity. This caused more extensive plate motion and rapid subduction of the pre-Flood ocean crust along the West Coast of North America. As I noted in my previous article, the East Coast had already exhibited significant rifting in the Triassic, breaking away from what is now recognized as Africa. Essentially, the Jurassic witnessed the rapid injection of new, hot, buoyant ocean crust between the separating continents, creating the seafloor of the Atlantic Ocean.

All of this increasing tectonic activity would have accelerated the violence of the Flood by pushing tsunami-like waves higher and farther inland, transporting physically bigger marine reptile creatures (e.g., Plesiosaurus) and deeper-water ocean fish onto the rapidly dividing continents—mixing them with land creatures living at higher elevations. This activity is reflected in the more extensive Jurassic rocks found spread across the continents as the water inundated even higher elevations than before.5 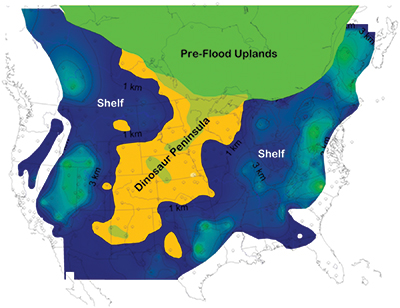 The land life entombed in Jurassic rocks represents not only an increase in water height and depositional violence, but the progressive burial of ecosystems farther inward on the pre-Flood Pangaea mega-continent. In fact, there’s evidence that the extensive Jurassic Morrison Formation in North America represents animal and plant life ripped off what ICR geologist Dr. Tim Clarey refers to as Dinosaur Peninsula.6,7 In this model, the dinosaurs were able to survive through the early part of the global Flood in western North America simply because their habitat was not yet fully flooded, which occurred during the deposition of the Zuni Megasequence of which the Jurassic was merely the start. Other Jurassic dinosaurs may have been able to evacuate their lower-elevation pre-Flood habitats and flee to higher remnants of land as the floodwaters advanced.

The Lower Jurassic represents the last part of the Absaroka Megasequence, with the remainder of the Jurassic belonging to the Zuni.8 The Jurassic layers must have been very violently deposited to bury the huge dinosaurs found within them. The Jurassic system was also the final leadup to deposition that peaked on the continents later in the Cretaceous. Keep in mind also that this was occurring at the same time as the Pangaea mega-continent was increasing its breakup and plate separation. Within this overall scenario, the dinosaurs were buried in a definable order as the waters progressively inundated more and more land.6,7

The ICR model of a Dinosaur Peninsula shows a hypothetical landmass extending down through the United States from Minnesota to New Mexico. This represented a low-lying land area below the pre-Flood uplands. It would have been full of all kinds of dinosaurs, large and small, as found in the rock layers.

As the Flood’s waters advanced up over the peninsula, the outer edges and the southern tip likely flooded first, producing the Triassic system rocks and trapping many dinosaurs that couldn’t escape. As the Flood progressed higher due to increased tectonic activity, larger and possibly more mobile sauropods and theropods that had lived at or had escaped to higher ground were buried in the Jurassic layers. This scenario eventually reached its peak in the Cretaceous (Zuni Megasequence).5

ACTS & FACTS
Animal Death Before the Fall?
Both the Old and New Testaments teach that death entered the world when Adam ate the forbidden fruit (e.g., Genesis 2:17 and Romans 5:12). Since fossils...
BY: JAKE HEBERT, PH.D.
Shop Related Products