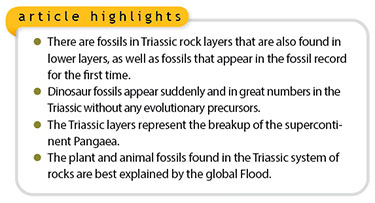 The Triassic system of the geologic column is an enigma to evolutionists because it represents both a continuance of many life forms found buried in lower strata combined with an alleged and unexplained recovery from a convoluted mass extinction. In addition, many unique life forms make mysterious sudden appearances in the Triassic without any previous evolutionary ancestry. And this massive convoluted fossil assemblage is also accompanied by signs of the initial breakup of a once-existent mega-continent.

However, the evolutionary confusion over this curious quandary of catastrophically buried fossils and tectonic teasers makes perfect sense when we apply a model of progressive burial by ecological zonation and plate tectonics associated with the global Flood of Genesis.

Permian-Triassic Extinction Not So Clear

As I mentioned in my previous article in this series, one of the chief enigmas evolutionists have at the base of the Triassic is an apparent mass extinction event at the Permian-Triassic (P-T) boundary.1 The enigma lies in the fact that the timing or the order of buried plants and animals is very convoluted and drawn out in evolutionary deep-time thinking. Many Permian marine organisms were abundant right up to the P-T boundary, but land life was much less represented in the sediments—especially land plants that allegedly exhibited a more extended extinction, with their fossils extending well into the Triassic.

In other words, why is there a more sudden and extensive marine creature extinction compared to the spread-out land extinction? And why is the timing different between land animals, land plants, and marine creatures regarding the overall event, which according to evolutionists took about 15 million years? Furthermore, why did this event occur in the middle of a global megasequence (Absaroka) and not at one of its boundaries? 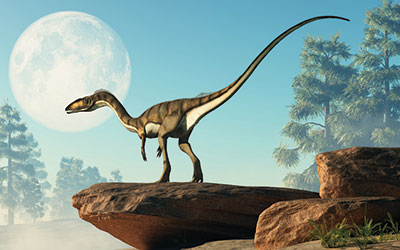 Dinosaurs are clearly the rock stars of fossil land creatures, and this diverse group of reptiles makes their first appearance suddenly in the Triassic with no evolutionary precursors.2-3 The alleged first of such reptiles is the unique Eoraptor, a small and lightly built bipedal creature that was about five feet long. A nearly complete Eoraptor fossil was found in northwestern Argentina. Eoraptor had a variety of different tooth shapes, which led scientists to suspect that it was omnivorous. Although it’s claimed to be about 230 million years old (Ma) and from the Late Triassic, it actually occurs in sediments smack dab in the middle of the Triassic.

In nearly the same strata, but in a Triassic quarry in New Mexico known as Ghost Ranch, another notable complete bipedal dinosaur known as Coelophysis was found. (It’s New Mexico’s state fossil.) In fact, the Ghost Ranch site has produced one of the world’s largest collections of dinosaur fossils. Coelophysis is believed to have been carnivorous because it had curved claws on its hands and a slim head with lots of sharp teeth. It was about twice the size of Eoraptor, growing to 10 feet long. Because many Coelophysis fossils have been dug up in the same locations, scientists think they may have lived together in herds, although their rapid burial en masse points to the global Flood. 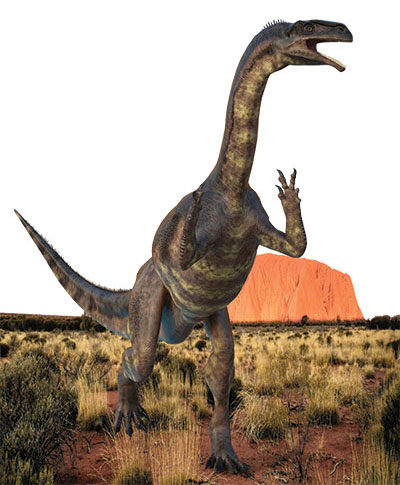 In slightly higher Triassic strata dated about 210 Ma, another interesting type of dinosaur called Plateosaurus was found. This was yet another bipedal dinosaur but even more massive in size than Eoraptor or Coelophysis. This creature was up to 23 feet in length and was thought to weigh about three tons. It had a thick, powerful, long tail and coarsely serrated teeth for chewing plants. Interestingly, it had a curved claw on its thumb that may have been used to grasp branches or even for defense.

Fossils for this creature have been found in diverse places in Central and Northern Europe and Greenland. One Plateosaurus bone was even found 70 miles offshore of Norway below 1.5 miles of Flood sediment.4 As with Coelophysis, large numbers of Plateosaurus skeletons have been found in the same location, suggesting herd behavior and a catastrophic burial en masse.

Dicynodontia is a very broad and diverse taxon of different kinds of creatures called therapsids that I introduced in my previous article.1 They first appear in the mid-Permian and then become more numerous in the upper Permian and continue on through the Triassic. The dicynodonts are not fully part of the great P-T extinction enigma because they selectively survived the extinction that wiped out other creatures.

Dicynodonts are considered to have been herbivorous and had two tusks, hence the name, which means “two dog tooth.” Evolutionists have classified them as non-mammalian therapsids, having traits that are mostly reptilian with some mammal-like features. Their diversity is emphasized in over 70 genera, with the different types varying in size from as small as a rat to as large as an elephant. 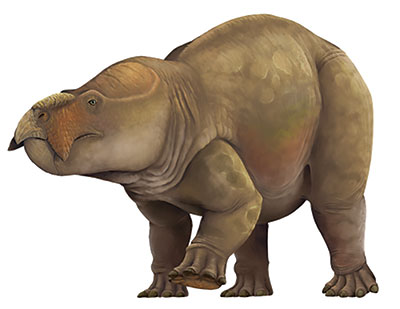 Yet another unusual dicynodont is called Lisowicia. It had an estimated length of more than 14.7 feet and a height of 8.5 feet, yielding a body mass of an incredible nine tons. Not only does its massive size baffle paleontologists, but it has forelimbs indicating an erect gait (upright limb posture) completely different from other dicynodonts that were characterized with sprawling forelimbs giving a posture like extant reptiles. Its massive size and unique form appeared suddenly in the fossil record of the Triassic and utterly defied the preconceptions of evolutionists.

The Triassic also contains a whole host of creatures known as marine reptiles. Most of them looked like ocean-adapted lizards, with long bodies, necks, and tails.2-3 One well-known type is Keichousaurus, which had a very long neck and is often found as complete articulated skeletons. This makes them very popular among fossil collectors.

Another sea-lizard type of creature was the thalattosaur, which had a long, paddle-like tail and slender body. Interestingly, a thalattosaur was found in the belly of another creature claimed to be a marine reptile called an ichthyosaur, which looked more like a dolphin than a lizard.5 Truly, the diversity of marine creatures buried in Triassic sediments is mind-boggling and also contains many different types of fish, reptiles, arthropods, and gastropods.

Breakup of Pangaea and Dinosaur Tracks

The Institute for Creation Research’s global megasequence research has shown that the Triassic system also represents the beginning of the breakup of the pre-Flood mega-continent Pangaea. This was accompanied by massive pulling apart (rifting) of the outer rocky part of the earth’s crust (lithosphere), creating deep basins where material from the continental edges and Flood sediments broke off and collected. One striking example is known as the Newark Supergroup, which contains an assemblage of Upper Triassic and Lower Jurassic sedimentary rocks that protrudes (outcrops) in various places along the East Coast of the United States.5 These rift basins were formed as North America began to separate from Africa during the Flood.

While evolutionists like to claim the Newark Group is non-marine and formed over millions of years, the rocks are composed of rapidly deposited material, as evidenced by the fact that the breccia (angular fragments), sandstone, siltstone, and shale are poorly sorted. In other words, they were buried so quickly and violently that gravity and water transport had little time to sort the material by particle size or round off the edges.

Furthermore, even the fine-grained red beds of the Newark Group feature ripple marks, mud cracks, and even raindrop prints that are best explained by the ebb-and-flow nature of the global Flood. But even more revealing are the numerous dinosaur footprints that are found without fossilized body remains.6 While this conundrum of lots of tracks and no bodies mystifies evolutionists, a Flood-based interpretation indicates that dinosaurs and other creatures were fleeing en masse to higher ground and left tracks as they traversed these freshly filled, soft sediment basins.

Explaining the Triassic Enigma with the Global Flood

The global Flood involved the formation of increasingly more new seafloor and plate activity, escalating the inundation of the land with tsunami waves and marine sediments. As I mentioned in my previous article, Permian strata leading up to the alleged mass extinction of marine life actually represented the increasing accumulation and systematic burial of the offshore ocean ecosystems.1

The land life later entombed in the Triassic rocks represented the increasing water height and subsequent burial of tropical and semitropical forest biomes farther inward on the Pangaea mega-continent. This is why we see such a rich diversity of plant-eating creatures that were living in these lush forests, along with a rich diversity of reptile-like creatures in general that would have been well adapted to such environments.

Also, according to the Flood model the pre-Flood mega-continent Pangaea would have started to break up in the Triassic. The breakup is primarily visible where modern North America and Africa first separated from each other. This is why global maps of the oceanic lithosphere show Triassic strata along the ocean edge at these points of separation along the continental margins of North America and Africa.8

While the prolonged and out-of-order extinctions coupled with plant and animal life that never went extinct across the P-T boundary make little sense in light of evolution, they integrate seamlessly with a model of progressive burial over the year-long global Flood of Genesis.