There’s a huge deposit of sand in the deep Gulf of Mexico, and no one seems to know how it got there—except maybe Flood geologists.

Early in my career as a geologist for an oil company, we were told not to prospect in water deeper than 2,000 feet. Most offshore oil is found in sand layers sandwiched between thick layers of mud and clay, and our management believed no sand could get that far offshore, and drilling costs were too high.

However, in 2001 the BAHA 2 well was drilled through almost 7,800 feet of water and into the Wilcox Sand at the base of the Tejas Megasequence. The drillers found 1,100 feet of nearly continuous sand. This discovery shocked geologists, who termed it the “Whopper Sand,”1 and paved the way for numerous nearby discoveries of billions of barrels of oil. 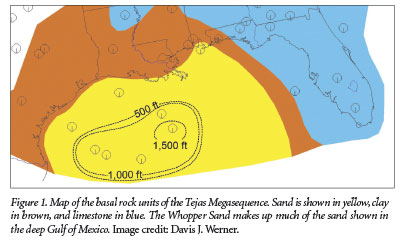 The Whopper Sand extends over 40,000 mi2 in water depths between 7,600 and 10,000 feet, and is over 225 miles from the nearest onshore discoveries of Wilcox-equivalent sands (Figure 1).1 It is commonly more than 1,000 feet thick and can be up to 1,900 feet thick. Some layers even contain a high amount of metamorphic, volcanic, and sedimentary rock fragments, making this less like a winnowed-clean beach sand and more like a braided river sand.1,2 And it is not just the extent and thickness of the sand that makes this section unique, it is also the lack of interbedded clay and mud layers. The Whopper Sand is nearly 70 percent pure.3

Several hypotheses, bordering on the bizarre, have attempted to explain this enigma. One idea argues that sea level fell close to 6,000 feet in the central Gulf of Mexico, leading to the deposition of the Whopper Sand in the resulting great depression.4 Others use analogies of modern rivers and submarine canyons to explain the sand’s appearance.3 However, sea level dropping thousands of feet is not a reasonable cause. It is perhaps just as unlikely to claim that pure sand could travel 225 miles over a nearly flat basin floor. Modern deep-water deposits contain high amounts of clay that are necessary to maintain sand in suspension while traveling down a slope.1

So, where did the Whopper Sand come from? The answer appears to be related to the receding stage of the great Flood (Genesis 8:3). The Whopper Sand is near the base of a worldwide sedimentary sequence—the last of six—formed during the Flood.5 Drainage across the United States changed dramatically as these layers were being deposited, with most of the water flowing toward the Gulf of Mexico.6 It is logical that the floodwaters that inundated whole continents would have flowed off in catastrophic volumes. High-velocity sheet-like flow would tend to transport large volumes of sand and rock fragments first, dumping the Whopper Sand into deep water.

This type of flow would only have occurred once during the recession of the Flood’s water. Today, we find mere “trickles” of flow to the deep water, transporting a mixture of clay and sand down submarine canyons. Because the Flood was global, there are likely other whopper sands to be found in deep water worldwide.

* Dr. Clarey is Research Associate at the Institute for Creation Research.