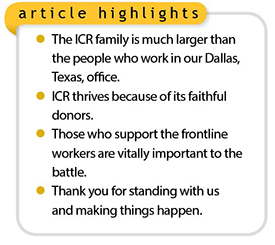 In 1 Samuel 30, there’s an interesting story that’s easy to overlook if you fly by too fast. David and his men are returning from Jezreel to Ziklag. Upon arriving at Ziklag, they find the city burned with fire and their families taken captive by the invading Amalekites. Grief-stricken, David inquires of the Lord about a course of action. God replies, “Pursue, for you shall surely overtake them and without fail recover all” (v. 8).

David and his band of 600 men follow in pursuit. However, presumably due to the preceding three days’ journey (v. 1) and their emotional exhaustion (v. 4), 200 of the men “were so weary that they could not cross the Brook Besor” (v. 10). Those 200 stayed behind with the equipment while David and 400 men continued the chase. After a day-long battle, they emerged victorious and “recovered all that the Amalekites had carried away” (v. 18), just as God had foretold.

Upon returning to the Besor, certain “men of Belial” (“wicked and worthless men,” v. 22) among the 400 combatants objected to sharing the spoils of the battle with those who had stayed behind. David would hear nothing of it and acknowledged God’s hand in giving them total victory. David declared, “‘But as his part is who goes down to the battle, so shall his part be who stays by the supplies; they shall share alike.’ So it was, from that day forward; he made it a statute and an ordinance for Israel to this day” (vv. 24-25).

No matter the individual, God has for them a responsibility and a reward. This idea is continued by Paul in the New Testament, where he writes in 1 Corinthians 12:14-18:

ICR is made up of more than just the 50 or so staff members at the Dallas, Texas, campus. Many others donate their time, prayers, and money to assist in the great cause God has given us. Our speakers may be the ones who visibly “go down to the battle,” but donors are valuable as well and, I believe, will share in God’s rewards in a similar manner, as David decreed. As Paul writes in 1 Corinthians 3:8-9: “Now he who plants and he who waters are one, and each will receive his own reward according to his own labor. For we are God’s fellow workers; you are God’s field, you are God’s building.”

Yes, donors make it happen just as much as the official ICR staff. Not only do your faithful gifts keep our researchers researching, our speakers speaking, and our writers writing, your donations also keep our computers computing, our networks networking, and our printers printing. Many thanks to our faithful long-term donors. If you are a new donor or just thinking about becoming one, we ask that you prayerfully consider joining us in this battle to help raise Christ up as Lord and Creator to a lost world.

* Mr. Robbins is Information Technology Manager at the Institute for Creation Research.